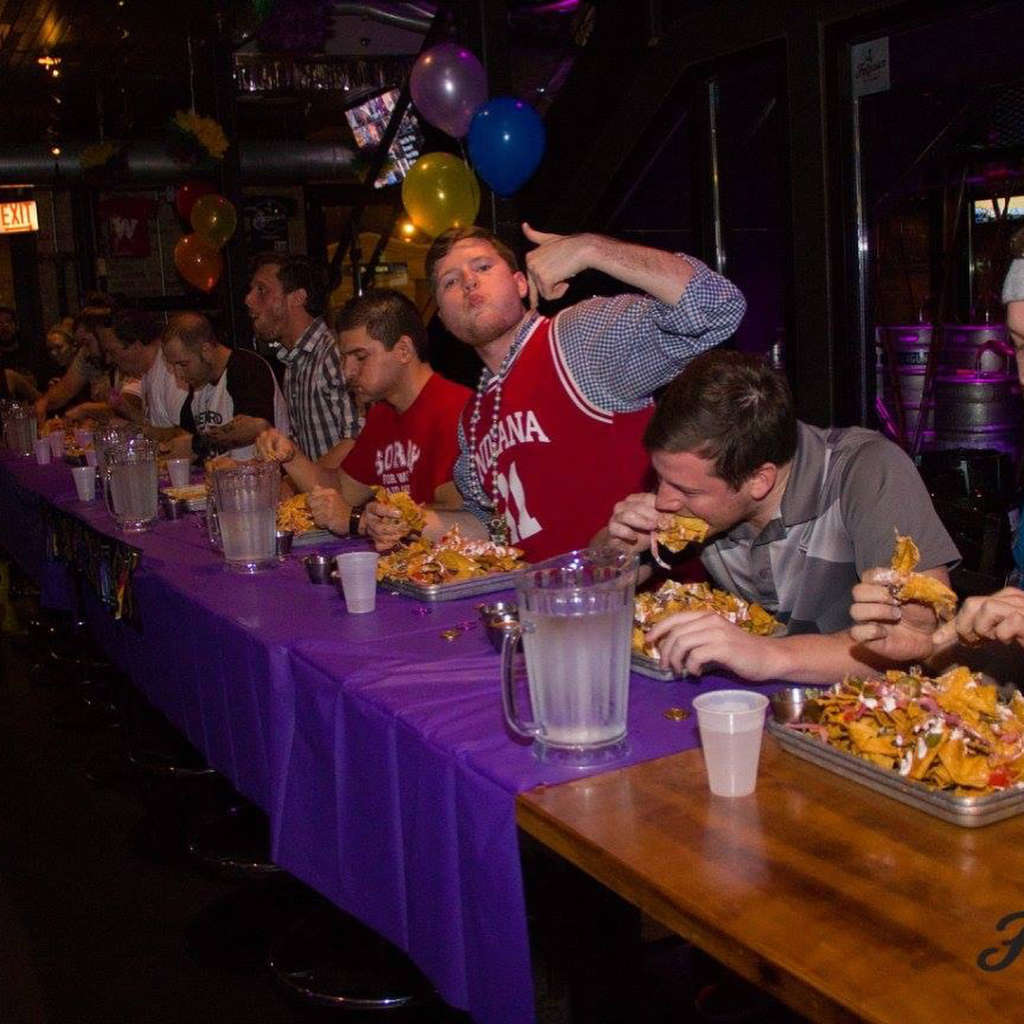 Okay, so no – broiest might not technically be a word. But we’re not gonna let a little technicality stop us from tellin’ you about the frattiest, most duded-out watering holes in town.

Not to be confused with douchebags – and certainly not to be crossed with hipsters – the Chicago bro is a unique breed. Clad in Jordan jerseys circa ’91 and Big Ten snapbacks, you can catch these guys in Wrigleyville pounding discount pitchers of domestic beer like it’s their damn job.

They’re the ones taking that Friday night game of darts wayyyy too seriously, whose eyes are glued to the bar room TV no matter what game is on. They’re the ex-frat dudes you know and love, and yet who insist on doing Jägerbombs on a Thursday afternoon even though – and this is true – literally no one likes Jäger. In the span of 30 minutes they’ll go from wanting to fight the guy who thinks the Blackhawks are overrated, to singing a surprisingly emotional (and unsurprisingly wasted) version of “Chelsea Dagger” with him.

They’re bros – and this is where you’ll find ’em in Chicago.

A favorite among life-long Cubs fans and tourists alike, Cubby Bear has been the unofficial Chicago bro HQ for years now. Take the Foo Fighters performance – and the near constant ebb and flow of white-boy rock bands coming through their doors – as proof. With a floor guaranteed to be sticky with the remnants of Bud Lights past and a main room that’s practically crawling with sweaty baseball fans from March through October, bros loooovveee Cubby Bear.

Sandwiched between Wrigley itself and the legendary drunk Taco Bell (for now, at least), you’ll probably have to swim through a sea of blue and red to even get in. But with parking nearby and a designated driver to be safe, you won’t have to walk too far.

From Yelp: “The bottom bar smells like actual vomit. It’s horrible.  After a few drinks I even asked a bartender “does it always smell like puke in here?” And she laughingly assured me that yes…it does. Ha!” –  Sara H.

One of the few bro bars toeing the line Division forms between Wicker Park and the East Village, The Boundary is a dude oasis in a hipster desert. With screens lining the walls and themed trivia nights that any suburban transplant in his mid to late 20’s would likely crush (90’s trivia, Parks and Rec trivia, Simpons trivia, you name it) this Iowa Hawkeye dedicated bar will leave you sayin “bruh” in no time.

From Yelp: “This is a sports bar on steroids. Seriously, this spot in Wicker Park is a go to spot for huge games, crazy nights out and for those morning after brunches.” – Nicholas M.

For evidence of Fatpour’s broiness, please view Exhibit A, displayed above.

Exhibit A showcases the Indiana Bro™ in his natural habitat: Jersey, on. Mouth, full. Finger, making some kind of douchey gesture in a show of faux masculinity.

From Yelp: “This place is bro-y and LOUD as hell.  It turns into a nightclub.  You can barely hear anyone at your own table.” – Christina W.

Batting cages, beer and baseball – there really isn’t a better bro formula. You can catch the dudes out here on a Saturday afternoon post-Cubs game, ripping shots of Jameson from plastic cups, or drawing out the night at 3am, drunkenly trying (and undoubtedly failing) to sing along to the dueling pianos. Catering to former frat stars of all ages, you’re just as likely to run into some long-forgotten high school ex as you are your dad’s college buddies, neither of which bodes well for the trajectory of your evening.

From Yelp: “BEST Chugging and Drinking Getting Wasted Bar in Chicago! Classic Cubs Bar! Batting cages and games upstairs and Dueling Pianos!! JELLO Shot girls constantly coming around! Haven’t ate here much! Mostly I come here to drink and play some games!! Always enjoy myself! One of the most iconic bars in Wrigleyville! This bar should get a national monument plaque to never change it! If you have people in from out of town!! THEY HAVE TO DRINK HERE AT THE MINIMUM!!” – Dan M.

For Tai’s Til 4, everything, apparently.

A dingy – yet somehow simultaneously clubby – dive in Lakeview, Tai’s is the bad decision bar bros from all over the Chicagoland area flock to between 2 and 4 am. It’s where you go when everywhere else is either closed or just far too nice for your level of smashed. It’s the strobe-lit hole-in-the-wall you head to when the guys have finally hit the “I have to take my shirt off” portion of the evening.

It’s just Tai’s. What else can we say?

From Yelp: “Tais Till 4 is like the last woman on the planet.  She doesn’t have to be good-looking, she just has to be THERE. As the name states, its meant to be the last stop before you crash.  The drinks are strong,and the atmosphere is what you’d expect. Nothing fancy, but enough to get the job done.  There is a small dance area in the back, but its only lit up and fully utilized on the weekends. Every other night it’s just a back lounge with no furniture, thus not very affective.  But the place will be packed at the end, you will meet some crazy people, and you’ll have fun- especially if you show up with a few in ya already. There’s also some late night food options nearby.” – Ben K.

AKA Big Shitty, Big City Tap is like your favorite sports bar, but worse. Open windows, games on TV, and free-flowing beer and wings – the bros they do come a runnin’.

From Yelp: “Are you clinging to this night like it’s the last of your life? Is the bar closing but you can’t remember where you live? Do you crave Jell-O shots but no longer attend a state school? Big City is the place for you, friend! I even got married here once by a homeless man. I kept saying no, but he did it anyway. Ah, Big Sh*tty, creating and destroying memories since whenever it opened (I have no idea how long I’ve been drinking here because I’ve been drinking here too long).” – Brynn C.