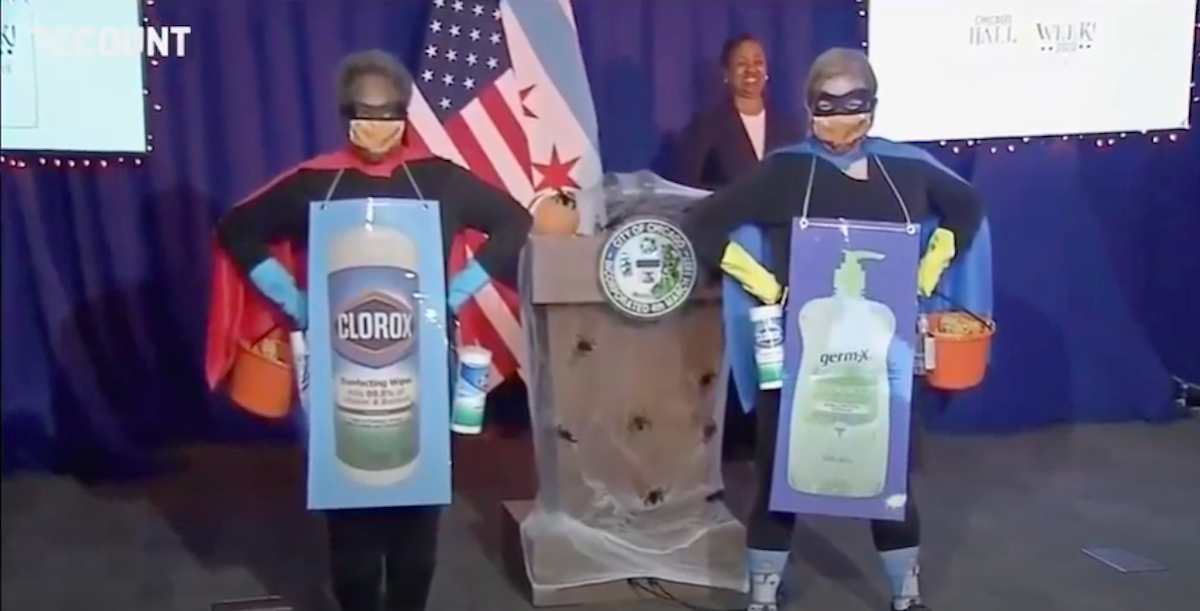 Mayor Lori Lightfoot Dresses Up as the Rona Destroyer at a Press Conference. What?

Since the pandemic broke in Chicago, Mayor Lori Lightfoot has been doing just about everything in her power to make things fun because nothing eases the minds of worried Americans like a good joke. It’s almost like the distraction that coddling parents give their kids right when they’re about to deliver the news that the McDonald’s Play Place is closed for “maintenance”. Enter, the…Rona Destroyer?

In her latest effort, and to celebrate the 1st of a month that holds a holiday that is still 30 days away, she dressed up as something called the “‘Rona Destroyer” to introduce the city’s guidelines for Halloween celebration in 2020. Let us first start by saying, what the actual f*** is happening here? This is the Halloween version of that “who’s manz is this” meme except it’s Mayor Lori Lightfoot of the third-largest city in America and she’s dressed as the Incredibles character that got cut from an early storyboard session in pre-production.

Now don’t get us wrong, we are no haters here at UrbanMatter Chicago. In fact, it’s commendable the work that Chicago Mayor Lori Lightfoot has done keeping people safe. However, my fourth-grade son could throw together a better costume than this, and I don’t even have a son. But that’s neither here nor there. Between this and that ridiculous Census Cowboy stunt that turned out to be DEFCON 1 past worst-case scenario, the Mayor of Chicago might want to think about just delivering the news straight up from here on out.

But don’t just take it from us. To get the pulse of how people are reacting to Chicago Mayor Lori Lightfoot’s latest Comic-Con press conference just read the thread of comments below this tweet.

Kirk Smith writes, “50+ people were just shot in Chicago, and the Mayor is having a Comic-Con press conference pretending to be a super hero with the super powers of bleach.” Well, Kirk, we personally advocate for the importance of bleach so you can go ahead and eat shorts. Also, why whenever something mildly light-hearted happens in Chicago the first response is always some variation of “PEOPLE ARE GETTING KILLED IN HER CITY AND HAS THE AUDACITY TO DO THIS!” As if Chicago’s murder rates (albeit terrible) and Mayor Lori Lightfoot dressing up like she’s trying to get you to change your cell phone plan off Western Ave are mutually exclusive. Keep that same energy off Twitter too, y’all. Anyways, next.

“My nickname on spring break was also the Corona Destroyer,” writes Ingenuous Firebrand. Sick, bro. You drink beer. You’d be cooler if you destroyed a 24 pack of Miller Lite instead. Next.

Then there’s this bit of glory from someone named Creative Temper:

While she’s distracting ppl with ridiculous stunts, creepy stuff keeps popping up around the city. The latest is these scooters appearing 2 or 3 per block around near north neighborhoods. All identical. Seen over six square blocks. Someone’s getting prepped for something. pic.twitter.com/vaXSgPmq0w

It’s a Bird scooter. It’s a damn Bird scooter. What does this person think the Near Northsiders are prepping for with their Bird scooters, a diabolical frat party? Creative Temper must be fun at parties.

When she’s not dressed up as the Rona Destroyer, you can see Mayor Lightfoot’s new COVID restrictions here.

Alright, all joking aside. We understand Chicago Mayor Lightfoot’s goal here, she’s trying to speak to the parents with kids who are understandably anxious about trick-or-treating this season. Remember how much you looked forward to it every year? For that to be taken away from kids completely would suck. So while we are glad the mayor is addressing something of concern for people in October, the execution missed, especially when you do take into account the ramifications of the Census Cowboy.

Next time, Lori, save the costume. We can do you dressing up as the Rona Destroyer at another presser.

For all of the city’s trick or treat guidelines, such as curfew and group size restrictions, you can follow this link here.