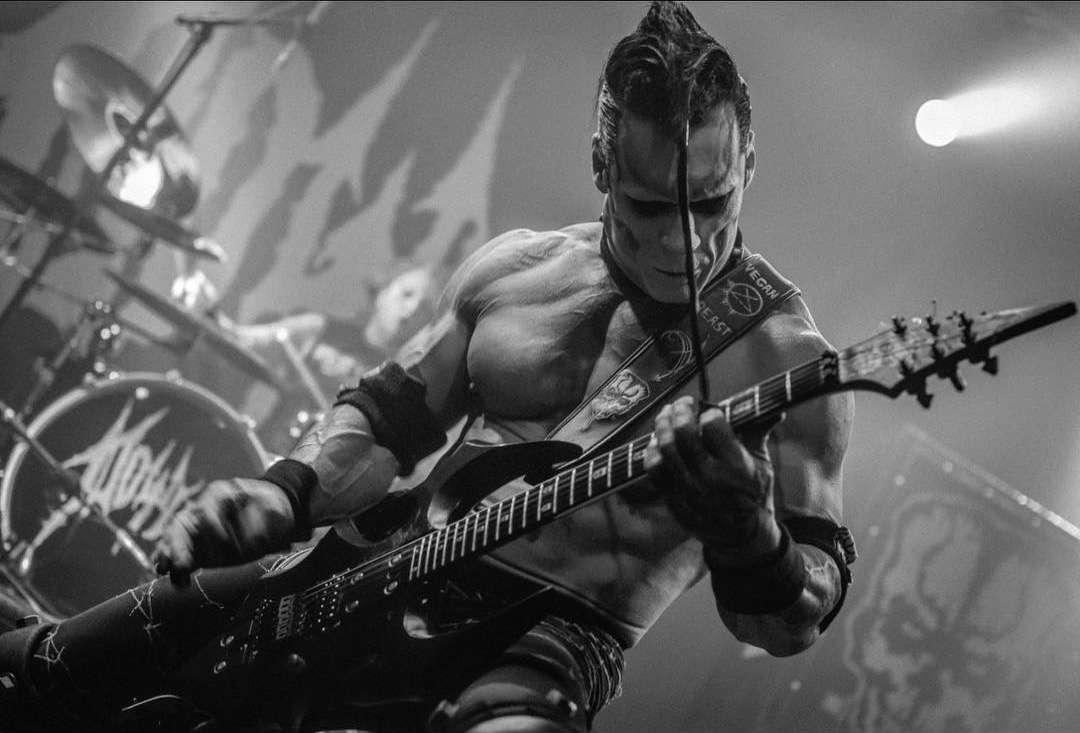 Doyle Wolfgang Von Frankenstein first achieved notoriety as a guitarist within the influential punk band The Misfits. Doyle joined Glenn Danzig, Jerry Only, and crew in 1980 as a teenager, sticking around through the group’s first breakup in 1983. A Jerry Only-led Misfits regrouped in 1995, with Doyle notably co-writing the music on 1997’s American Psycho and 1999’s Famous Monsters studio albums.

The New Jersey native has remained active as a solo artist over the years, and his latest album is last year’s Doyle II: As We Die. A proper full band album, like 2013’s Abominator, Doyle II: As We Die was primarily written by Doyle and vocalist Alex Story. Doyle and crew are currently in the midst of a cross-country U.S. tour — which kicked off in Hartford, Connecticut in early October — that is set to run through early January 2019.

Beyond his musical output, which has inspired members of Metallica, Guns N’ Roses, Alkaline Trio, and many other major punk and metal artists, Doyle is known for his impressive physique. He largely credits this to his vegan lifestyle, which girlfriend Alissa White-Gluz of Arch Enemy turned him onto.

While he was in Michigan for a tour stop, I had the pleasure of interviewing Doyle by phone. Doyle may not be a man of many words — as also learned from a prior in-person interview experience in New York — but his directness is refreshing in a way. As long as you don’t ask him about the upcoming Misfits show in Chicago.

More on Doyle Wolfgang Von Frankenstein, including tour dates, can be found on his website.

Do you remember the first time you played live in Chicago?

I think so. I remember walking down the street, I had to go take a shit in a hotel. I walked back from soundcheck and there was a giant rat in the street, walking down in the gutter, about the size of a raccoon. Nobody even looked at it. I was like, “Can anybody see that fucking thing?” So that’s what I remember.

Was that in the 80s? When you were touring with The Misfits?

When it comes to eating in certain cities, I’d imagine it’s easier for you to eat in bigger cities. Are there any restaurants you especially like in Chicago?

I’ve only been to Chicago Diner. I went there, my plane got delayed and I had to stay a little longer, so I went to the Chicago Diner. I tried three main courses, three shakes, ice cream… I ate so much. The guy came up to me, the waiter, and he was like, “I’ve never seen somebody eat so much food in my life.” (laughs)

Is that a normal occurrence for you when you go out, ordering multiple entrees?

I think that’s normal for vegans. To go to a restaurant, we want to try everything, ordering too much food.

Whatever they’re doing, that’s what we do.

I thought it was your dog based on how many photos there are of you holding the dog.

She’s sleeping on me right now.

Do you yourself have any pets?

And that cat’s in Canada? Or it’s on the road with her?

We can’t bring a cat on the road, he’s in Canada.

Speaking of Alissa, I heard that you are working on an album for her.

No, she’s working on her own album. I just wrote a couple compositions for her to write vocal melodies on. Whether she uses them or not, that’s up to her and the producers, I guess.

Is that the first time you have written for another artist?

I would say yes.

After writing for her, do you hope to write for other artists?

If they’re fucking huge and I can make a shitload of money doing it, yeah. (laughs) Otherwise, not really, no. (laughs)

I appreciate the honest answer there. I really like the latest album from your band, Doyle. Is there a third one in the works?

Are the songs written for that next album?

Most of it is, yeah.

Do you have a timeline of when we might see another album from Doyle?

I don’t, you know? I want to tour this one for a little bit, then we’ll get the other one out.

What about guitar strings? I read somewhere that you may be putting out your own.

Yeah, Dean Markley is putting out a signature set for me.

How long have you been working with Dean Markey?

What was your first endorsement as a guitar player?

Going back to touring, is there anywhere you haven’t yet toured that you’re still hoping to go?

Japan, Australia, South America, Canada if we can get in there. I don’t know where else there is.

As a big fan of Creature From the Black Lagoon, I’m surprised that you didn’t say anything about Transylvania.

We actually had a show there but the tour fell apart. The bus broke down and we couldn’t make it.

Did I miss any of your current projects? Is there anything else you are currently working on?

I’m gonna be playing with Metal Allegiance in January at the NAMM show with Alissa. Other than that, we’re going to do this tour and start booking summer festivals in Europe.

Is there any chance that we may see you in Chicago in April playing with that infamous band?

Point taken, so finally, Doyle, any last words for the kids?

Part of this article, as also penned by author Darren Paltrowitz, appeared previously within a feature written for Sportskeeda.