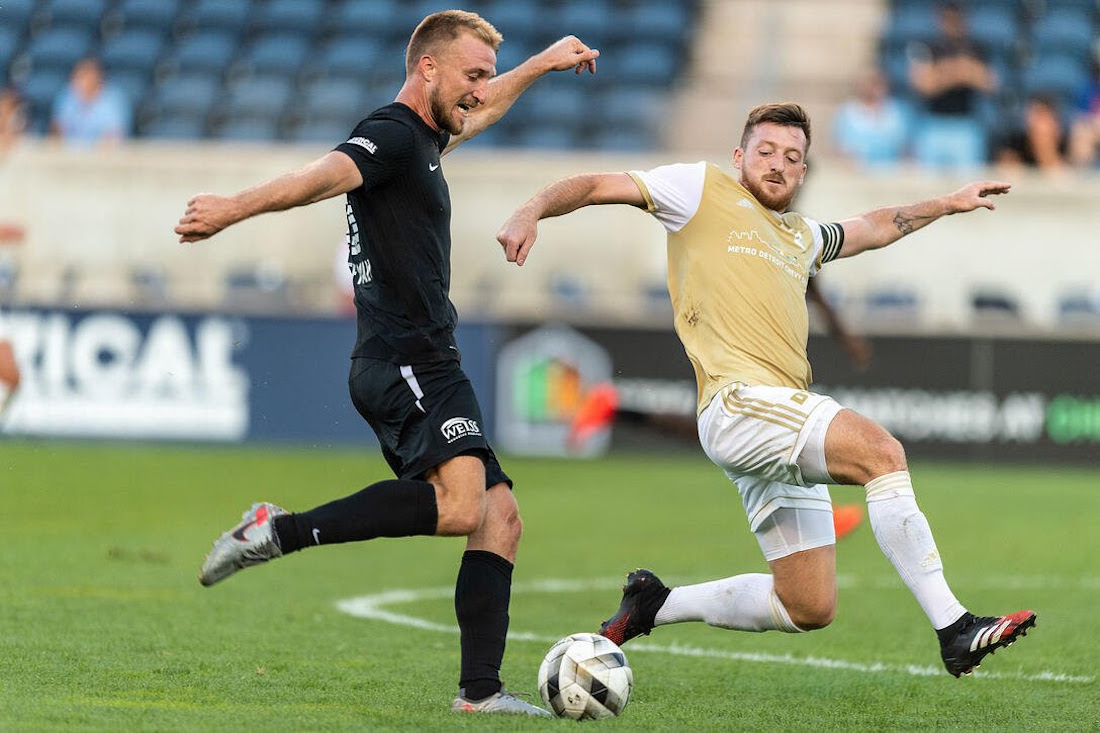 Similar to the previous House home match on August 21st, Chicago House AC had some quality chances early in the game. The first came in the 12th minute when Drew Conner sent a cross-pass to Derek Huffman for a header shot, but the attempt went wide. A few minutes later, in the 16th minute, Musa Morris blasted a shot from the top of the 18-yard box, but Detroit City goalkeeper Nate Steinwascher corralled the ball for the save. Huffman had another chance in the 25th minute, but Steinwascher stepped up with another big save to prevent that scoring chance for the House. In stoppage time, Huffman had yet another chance late in the first half when he received the ball from Wojciech Wojcik, got an opening and took a shot, but the ball went straight to the keeper’s chest. Huffman had three scoring chances in the first half but the House couldn’t convert.

The game-changing moment came in the 63rd minute of the second half when midfielder Michael Kafari got called for a foul in the box, and the head official awarded Detroit City FC a penalty kick. Maxi Rodriguez scored his second penalty kick goal against goalkeeper Michael Novotny and the House on the season, which was enough for the visitors to get a shutout on the road and defeat Chicago for the second time this month.

Head Coach and Technical Director C.J. Brown felt his team improved from their previous match despite the loss.

“The guys played to a tee on what we’ve been working on in training – I thought we held and moved the ball very well,” said Coach Brown. “We didn’t get a lot of opportunities on goal, but we are making baby steps to become a better soccer team. From our performance last week to now, I saw guys that wanted to play and were working hard to make that happen. I’m happy with a lot of the guys’ performances.” Brown also added that the club is still focusing on the bigger picture despite the tough start.

“We’re a team that’s going to grow every day; we train hard, we fight hard. To come out tonight and fight the way we did after a disappointing result last week, I thought we had a good improvement,” continued Brown.

Chicago House midfielder Michael Kozielek gave some insights on the change to play left-back in Sunday’s game, a position he hasn’t played since college, and how he adapted to his new role.

“I got to play left-back for a solid three years in college and played a little bit out of my first year out of college in Sweden,” explained Kozielek. “I’m familiar with it, and it wasn’t too bad of a shift. I got a few reps in training and did what CJ was calling upon. There are going to be a few guys moving around throughout the season. It’s still early, and we’re just trying to get our best players on the field and figure it out from there, so I’m happy to do it.”

The loss on Sunday resulted in the House dropping to 10th in the NISA Fall Standings while Detroit City FC moved up to 1st in the table.

This Saturday, September 4th, the House will be on the road to face Michigan Stars FC at Romeo High School Stadium in Washington, MI at 3:30 PM EST/ 2:30 PM CST. Fans can tune in live by visiting www.chicagohouseac.com/watch-live. For team updates and information, please follow the team’s social media pages on Facebook, Twitter, and Instagram, @ChicagoHouse_AC for live updates and fan reactions.