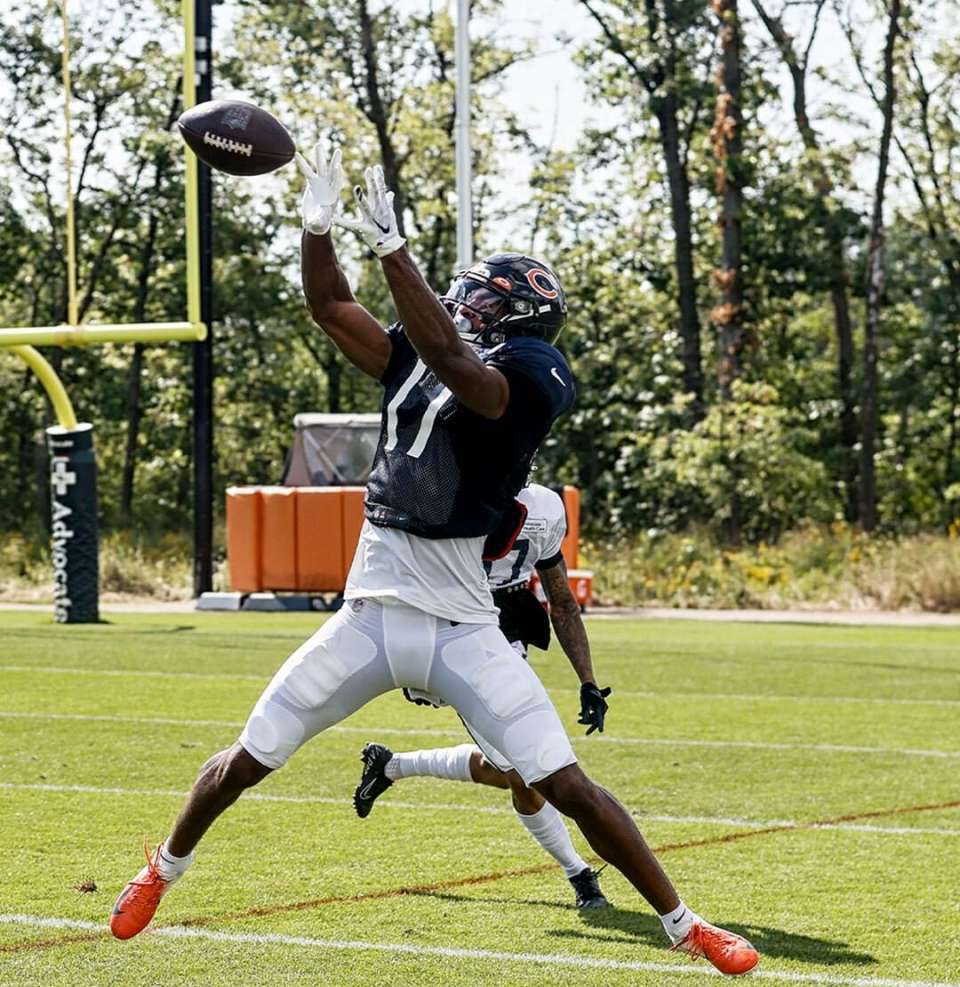 5 Bears Players To Consider In Your Fantasy Football Draft

Ahh yes, it’s finally that time of the year again. The 2021 NFL season is right around the corner which means fantasy football is back! And today, we’re here to discuss some Chicago Bears fantasy football players you should consider.

Whether you’re a fantasy newbie this season or a seasoned vet, odds are you already started some preparation for your upcoming league draft. Or maybe your league held it’s draft by now. Either way, if you’re a loyal Chicago Bears fan who’s looking to round out your fantasy team, then here are the top Bears fantasy football players you should target in your drafts!

Darnell Mooney may not be number one receiver on the Chicago Bears depth chart, but that doesn’t mean you should shy away from him as a solid Bear fantasy football player. In his rookie season last year, Mooney posted a stat line of 631 yards with 61 catches and 4 TDs. He finished 50th overall as a fantasy scorer, which is not too shabby considering his quarterbacks consistently missed him when he got open. This season, expect Mooney to get better passes thrown to him regardless of who’s starting. Mooney’s current ADP is 123 overall and he’s been the 50th wide receiver taken off draft boards. That’s pretty laughable if you ask us.

Not many fantasy football leagues utilize the IDP (individual defensive player) position on their rosters. But, if your league does, then you’ll certainly want to consider Roquan Smith in your fantasy drafts. Odds are you’ll have to grab him pretty early on depending on how the rest of your league drafts. Last season, Smith finished as the #2 scorer for the IDP position with 98 tackles, four sacks, two interceptions, and one forced fumble. Of all guys on the defense, he’s the Bears fantasy football player to reach for.

If running backs were currency, they’d be considered gold in fantasy football leagues. So when you’re considering what Bears fantasy football players to draft this season, think David Montgomery when it comes to running backs. In last season’s fantasy output, Montgomery was surprisingly the 4th best RB when it was all said and done. Sure, Tarik Cohen going down helped bolster his output, and poor quarterback play did too. We’re not telling you to expect a similar outcome in 2021, if anything expect him to be outside the top 10. Montgomery is currently being drafted at an ADP of 31 as the 18th bell cow off the board. We’re hopeful that he cracks the top 15 at the end of the year, with a top 20 finish as our worst-case scenario.

Look, we get it, Justin Fields hasn’t even been named the starter yet. And should Nagy get his way, there’s a good chance he doesn’t start week one. But, will Fields start before the Chicago Bears bye in week 10? We sure as hell hope so. If you want a sleeper quarterback to stash on your fantasy benches who could make your team a league winner come playoff time, then look no further than Justin Fields.

Our final Chicago Bears fantasy football player that absolutely needs to be rostered in every league is wide receiver Allen Robinson. In the past two seasons of fantasy football, Robinson has finished as a top 12 receiver. And that’s with you know who primarily throwing the ball his way. He’s got WR1 talent as a fantasy player, and he’s proved it consistently. So whether it’s Andy Dalton or Justin Fields slinging it his way in 2021, you can expect a better outcome. Robinson is currently going off of fantasy draft boards as the 13th receiver with an overall ADP of 39.