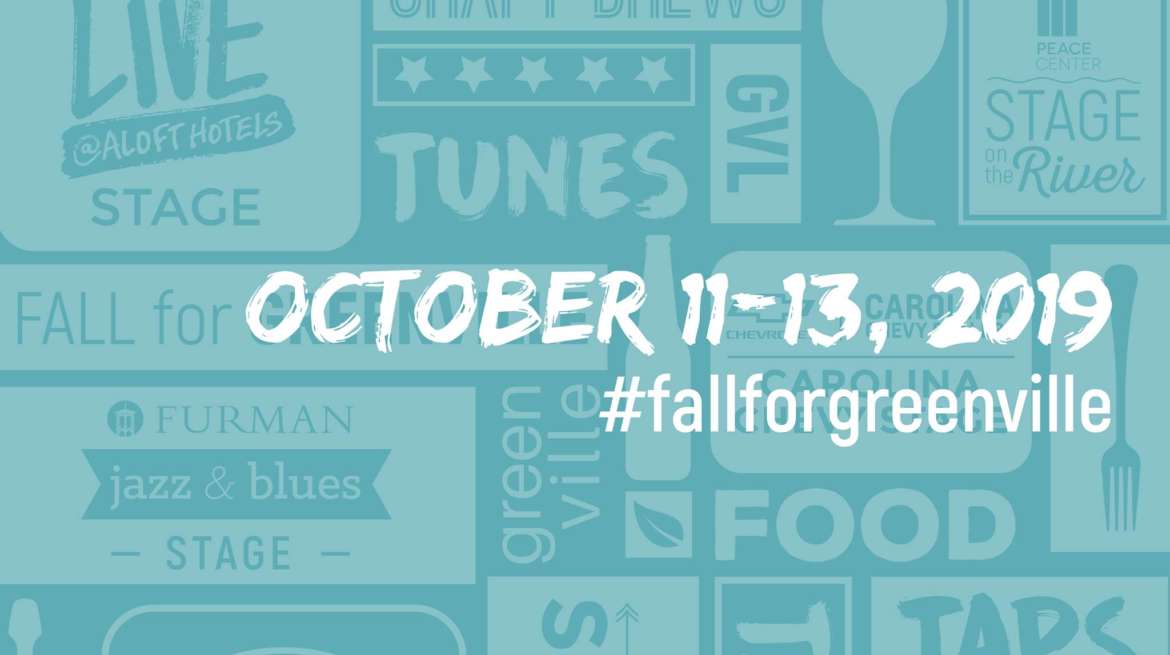 4 Musicians On “Fall For Greenville,” the City of Greenville & What’s Coming Up

Greenville may not be one of the five largest cities within the state of South Carolina, yet it manages to have just about everything that a person would expect from a major city. That not only includes an airport, hotels, restaurants, and nightlife, but also an arena, sports teams, a bike-share program, breweries, artisanal coffee spots, festivals, museums, main street block parties, farmer’s markets, and over 700 acres of public parks.

Located halfway between Atlanta and Charlotte — geographically speaking — Greenville is also within driving distance to Nashville, Raleigh, Birmingham, Louisville, and Jacksonville. While the growing city is currently without a direct flight to Los Angeles, Greenville does currently have direct flights to and from Chicago, New York, Dallas, Denver, Detroit, Houston, Miami, Philadelphia, Las Vegas, Houston, and other major American cities.

A festival known to attract more than 150,000 guests over the course of 3 days — more than doubling the city’s population — Fall For Greenville is known not only for its variety of culinary offerings (50+ local eateries set up tents along eight blocks of Main Street) but also for its incredible concert series. More than 60 acts take to 5 stages over the course of the weekend. Ultimately, Fall For Greenville is passionate about shining a spotlight on regional talent and loves to pair up local bands with national acts whenever possible.

From Moon Taxi to Lilly Hiatt to Phat Lip to Reckless Kelly to The Bad Popes, every single performance is free to attend. Indie-folk lovers will love Apricot Blush and San Fermin, country rock fans will enjoy Darby Wilcox & The Peep Show, etc. This year’s musical lineup features bands from Columbia, Charleston, Athens, Asheville, New Orleans, and New York. In addition, more than 50 craft beers from 26 breweries will be featured beyond there being 50+ eateries with set-ups along Main Street between October 11 and 13, 2019.

I had the pleasure of visiting speaking with 4 different artists who are playing Fall For Greenville this year, and highlights from those Q&As are below:

Tell me about your history with Greenville. When did you first go there?

Keon Masters: I think I first went to Greenville for a cross country meet in high school or maybe a basketball state championship game to cheer on my friends? I grew up in Fort Mill and this would have been ‘05 or ‘06, maybe?

Mark Webb Jr.: I was born in Greenville, and my entire family is from there. We moved to the next county over when I was 8, and I lived there until I went to college. But we were basically in Greenville every week visiting family, shopping, etc.

Darby Wilcox: I’ve been in Greenville since 2005ish. I moved here after high school in order to play original music. I met many songwriters going to the open mic at coffee underground back in the day. It was an inspiring and exciting time in our scene.

Do you have a favorite restaurant in Greenville?

Mark Webb Jr.: To be completely honest, I do not. Greenville has a lot of great restaurants, but I’m not a foodie. Don’t get me wrong, there are foods that I enjoy eating, but nothing that I absolutely love and can’t live without. Except coffee and ice cream. (laughs)

Darby Wilcox: I LOVE to visit Kuka Juice in the Village. So many vegan and gluten-free options, fresh juice and they’re always super-pleasant. If I want to sass it up I enjoy Anchorage or Husk for their care in local ingredients.

Is there a city that reminds you of Greenville?

Keon Masters: A lot of the cities in the Georgia/South Carolina area remind me of each other. Cozy neighborhoods with quaint but cool downtowns. Greenville, Spartanburg, Augusta, Aiken, Macon, Athens — all great towns.

Mark Webb Jr.: I’ve been fortunate enough to travel all over the country, and other parts of the world. Greenville is unique. I personally have not experienced another city like it. Greenville is a small city, but it can have a big city vibe. It’s a good balance of having a lot to do while also feeling homey.

Thanks to @newnoisemagazine for premiering ”Got 2 Luv It” Click the link in the bio to hear it for yourself! Shout out to everyone who helped put this new material together. ✌️🤟🤘 #manythanks 📷: @dirtlord

Upcoming festival appearance in Greenville aside, what is coming up for you career-wise?

Keon Masters: I’m releasing my debut album Many Thanks on Friday, October 4th, playing a string shows to promote that and releasing a video shot by Greenville’s own Gunner Willis!

Mark Webb Jr.: I put out a record in April of this year called Smoke Wine Banter, which you can find on Spotify, Apple Music, and Google Play. With that release, we are touring and playing as many shows as possible to promote it. Next year will be a continuation of that, and then I’ll start working on the next album. I like keeping myself busy with work.

Darby Wilcox: We are excited to be playing the Carolina Jubilee this year with some great friends and peers we admire. Looking forward to more festivals in our future. What a treat to be surrounded by like-minded people and talented friends such as Susto, She Returns From Way, The Way Down Wanderers, Dangermuffin and more. This September is the first time I’ve ventured out to Colorado to play some shows. Hoping to get out west more after we record this second record.

Tyler Ritter: Well, first and foremost, we have some yet-to-be-released music, all of which was written since Let The Record Play was released. We’re excited to release new music in 2020 and take these new songs on the road. This past summer was a relatively-slow season for us by choice. There was a new Moon Baby born, so we took some time off to be with our families and travel. It was the first real break we’ve had in a few years, and it was lovely, but we’re super psyched about touring again and ready to bring the ruckus.

Finally, what do you wish more people knew about you?

Keon Masters: I play board games on Monday nights with my friends.

Mark Webb Jr.: I am a die-hard Atlanta Braves fan. Chop on!

Darby Wilcox: I pride myself on taking action and standing up through determination. I struggle with loving myself. I take baby steps every day to stay focused. For the past two years I’ve been a trainer for 9Round fitness. One of the most rewarding things I’ve done in my life. It’s more than just a job. It’s the action of empowering others and helping them reach goals they’ve always felt were just out of reach. It helps me feel grounded and grateful for my own fitness journey. I never thought I would ever be a gym person or be able to look the way I feel on the inside. I still struggle with that “outside look” I want to see in the mirror, but that place has helped strengthen me in both mind and body. Kickboxing is awesome. If you’re not a “gym” person I encourage you to give it a try.

Moon Taxi’s Tyler Ritter: I think people would be astonished to find out what some of our personal TV interests are while on the bus. We all 5 have pretty similar tastes, but it would be interesting to see if our fans could match which member to which outrageous TV obsession. 2 examples: 1) “Who would you find watching Ancient Aliens at 4:30 PM after soundcheck?” 2) “Which member sits and yells at the TV while The Price Is Right is on?” I’d be curious to see if fans could guess those. It’d be a fun game, for sure.

Excited to be playing Fall For Greenville this year along with a bunch of great friends! We’ll be on at 4:30 on Saturday Oct. 12th! I 👀 a bunch of Charleston bebes 🎉🎉🎉