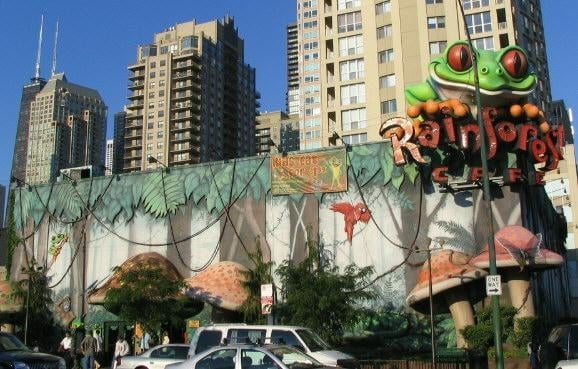 After almost a quarter-century at its famed location at the northwest corner of Ohio and Clark, River North’s Rainforest Cafe location is closing a year early. The jungle-themed restaurant chain closed its Schaumburg location at the start of this year “due to a natural lease expiration.”

The property owner of the building that the River North Rainforest Cafe location is situated in, Sean Conlon, confirmed with Block Club Chicago that the closure was partly a result of the coronavirus pandemic. The two-story building was “due to leave in one year’s time but [the pandemic] accelerated things,” said Conlon, a real estate developer and “The Deed: Chicago” star. “It’s an iconic restaurant that’s served families well, but there was simply no business.”

Like other restaurants, diners, and attractions popular for both tourists and residents alike, spring’s lockdown hit the River North Rainforest Cafe hard with the restaurant closing its doors initially because of the pandemic, but then never reopening for dining (indoor or outdoor) or carryout service.

Houston-based Landry’s Restaurants, the owners of the chain and operators of other notable brands such as Bubba Gump Shrimp and Morton Steakhouse, have given no comment as to why the location shuttered its doors. The iconic, neon “Rainforest Cafe” sign was removed from the building last weekend. Conlon has an agreement with the leaving tenants to keep one of the animatronic gorillas, but there’s no word on what will happen to the famed tree frog, “Cha! Cha!” (Could we put our hat in the ring for him?)

Colon said his lawyers were surprised to see a gorilla being mentioned. “Looking over the contract, my lawyer told me it’s the first time he’s encountered a gorilla clause,” Conlon said. “But I didn’t ask them for the frog. Perhaps I was a poor negotiator?”

The future of the River North site is unclear but Conlon imagines that two things will probably happen, the existing space will be renovated for a new retail tenant or the structure itself will be demolished and rebuilt in place as a high-rise. Rainforest Cafe turning into a high rise wouldn’t make it the first for an establishment in the neighborhood. Regardless, Conlon is optimistic.

Wanna go somewhere that is open? View our list of the best tapas restaurants in the city.

“Obviously the world has changed, but even in a crisis this is still one of the premier corners in Chicago,” Conlon said. “It’s too early to say [what the outcome will be], but I get several calls a week about it. Some opportunity will emerge.”