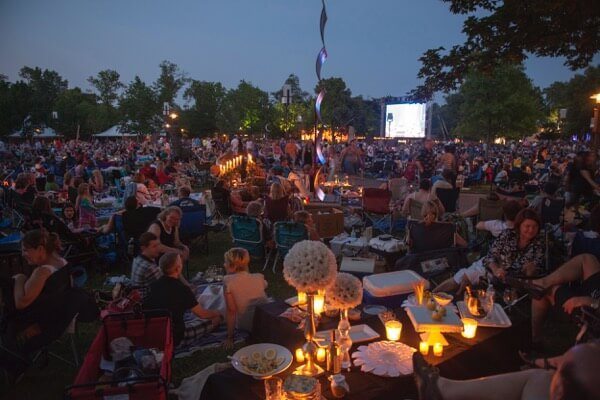 The Last Summer on Earth Tour from Barenaked Ladies kicks off Ravinia’s “Concert Under The Stars” season on Thursday, June 9 in Highland Park, Illinois. Also starring OMD/Howard Jones, the gates open at 4:00 p.m. and the show starts at 6:30 p.m.

Here’s a sneak peak of what to expect from Barenaked Ladies:

World-renowned Ravinia is the oldest outdoor music festival in the United States, offering a series of classical, jazz and pop concerts from June to September. In their open-air covered pavilion and spacious lawn seating, Ravinia has hosted a summer full of musical celebration for over 100 years. New this year is an aquatic sculpture created by the same designer as the Bellagio’s dancing fountains. This year also marks the 80th-anniversary summer residency of the Chicago Symphony Orchestra.

Dining on the lawn is a special treat for Ravinia goers. Cue the regulars who pack a portable picnic table, rolling cooler, candles, and tons of food. (Hint: Tables and chairs can be rented at the park so you don’t have to carry all your stuff.) Bring your own picnic, buy your accouterments or dine at one of several onsite spots. Mirabelle is Ravinia’s famous Chef’s Table with gourmet selections. The Ravinia Market features salads, sandwiches, brick oven pizzas, plus beer, wine and soda. They’ll also have specialty coffees, kosher hot dogs and more, and wine and ice cream are available from the fanfare carts right in the park.

The Ravinia Music Festival is just 30 minutes from downtown Chicago. The easiest way to get to Ravinia is via the Union Pacific North Metra line, which leaves from Ogilvie Transportation Center. The train stops right at the front gate to Ravinia. Visit Metra Rail for the complete schedule.

Make sure you plan a few Ravinia outings this season and see why Ravinia makes the most out of summer!