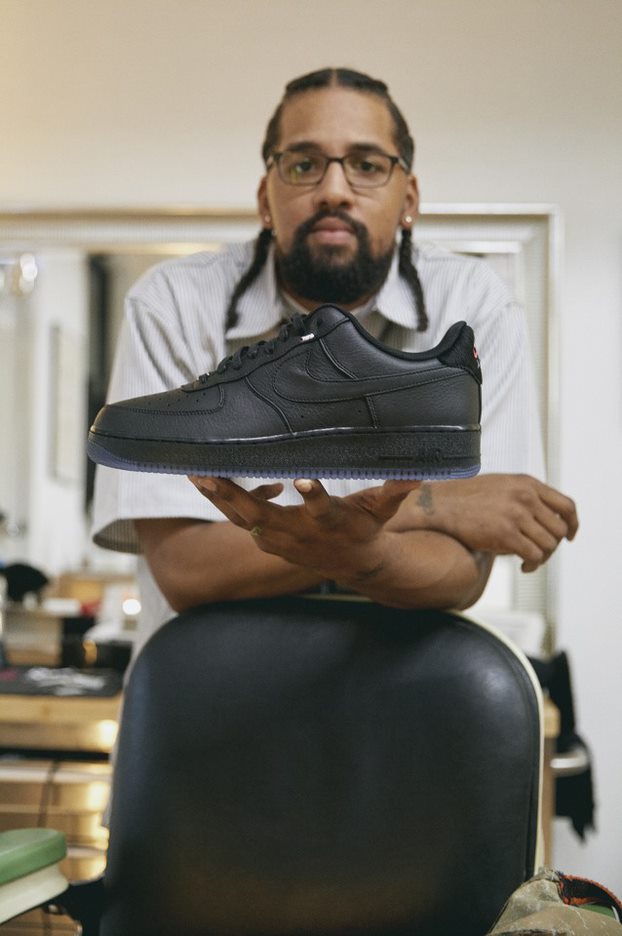 Way back in 1982 the Nike Air Force 1 Shoe hit the shelves. Originally designed for the hardwood, the shoe quickly gained recognition off-court for its timeless style. Since its release, the Air Force 1 Shoe has gone from a trend to an iconic piece of streetwear fashion worldwide. Much of the credit for the shoe’s success goes to the different communities that adopted it. These groups made the shoe a symbol of shared values and the power of expression in their community. To celebrate them, Nike tasked the design of this year’s Air Force 1 to the people in these communities.

As a result, three different Nike Air Force 1 Shoe designs came from communities in NYC, LA, and of course, Chicago. Each design expresses its community culture by blending sport, music, fashion, art, the street, and city into one. Chicago’s shoe design comes from local barbershop owner Drew Henderson who used the barbershop community as an inspiration.

“I’ve had a passion for cutting hair my entire life and, while I never thought to myself I’d be able to inspire a shoe, it is an honor to shine a spotlight on the city, industry, and community that made me who I am and motivate me every day. I share this with all of them.”

Barbershops have always been a staple in their communities, something that Drew Henderson knows all too well. Drew is the owner of the Chicago barbershop No Cuts No Glory. Since opening its doors in 2016, No Cuts No Glory offers an experience beyond the standard haircut. At his shop, Drew wanted to create a space that would bring members of his community together. A place where people can prepare for important moments in their life and discuss issues close to home. With such a clear passion for the community, Nike chose to collaborate with Drew to design an Air Force 1 shoe centered around the city he calls home.

With the help of Drew, Chicago’s Air Force 1 Shoe design showcases different aspects of the city through the eyes of the barbershop community.

“It means so much to me to be involved with the production of a shoe that represents some of the most important things in my life: Chicago, the barbershop and the community.”

Drawing inspiration from Drew’s story, the Air Force 1 ALL FOR 1 – CHICAGO shoe design incorporates both the function and style from barbershops, the community, and the city of Chicago while sticking to the classic Air Force 1 roots. For a deeper dive into the design of this Chicago specific Air Force 1 shoe, read below.

BOTTOM/OUTSOLE: The outsole is an ice rubber that provides extra grip on the shop floor. Through the outsole, there is a black and white diamond pattern that reflects classic barbershop flooring.

WAX LACES AND BARBER-INSPIRED LACE TIPS: Wax laces ensure that fallen hair will not get trapped. The aglet design represents the traditional barbershop pole, but the standard royal blue was replaced with light blue, a nod to the Chicago flag.

TONGUE: The front tongue tag on the Nike Air Force 1 Shoe features a visual of the swoosh and the Chicago skyline that transitions into the silhouette of a comb, alluding to the way in which the barbershop is at the “root” of the city. The top of the tongue includes a small white edge to represent the white tissue paper barbers use around customers’ necks. The inner-lining of the tongue is nylon red and white pinstripe, a nod to the classic barbershop cape used by Drew and many others.

INSERT: The green insert in the Nike Air Force 1 Shoe was added as a symbol of Drew’s first barber chair when he first opened up his shop – an egg-white chair with green accents. Around the insert, Drew added words that represent the values most important to him, Chicago and the barbershop community. The insert graphic of two hands together represents Chicago unity. Functionally, it also provides extra cushioning to support barbershops and hair stylists that are on their feet for long periods of time.

PONYHAIR HEEL TAB: A pony hair back tab was added to the Air Force 1 Shoe as a premium fixture and represents the hair that barbers cut daily

HIGH QUALITY TUMBLED LEATHER: The shoe features tumbled leather with rolled edges, a premium execution that is also functional so that hair being cut can be easily removed and won’t get stuck in the seams.

Looking to snag a pair? The Chicago edition of the Nike Air Force 1 comes out on December 7th in select Chicago retail stores and on Nike.com.

Best Spots to Celebrate Oktoberfest in Chicago this Year

Fight Zombies and Discover a Ghost’s Past at The Forge: Lemont Quarries this October