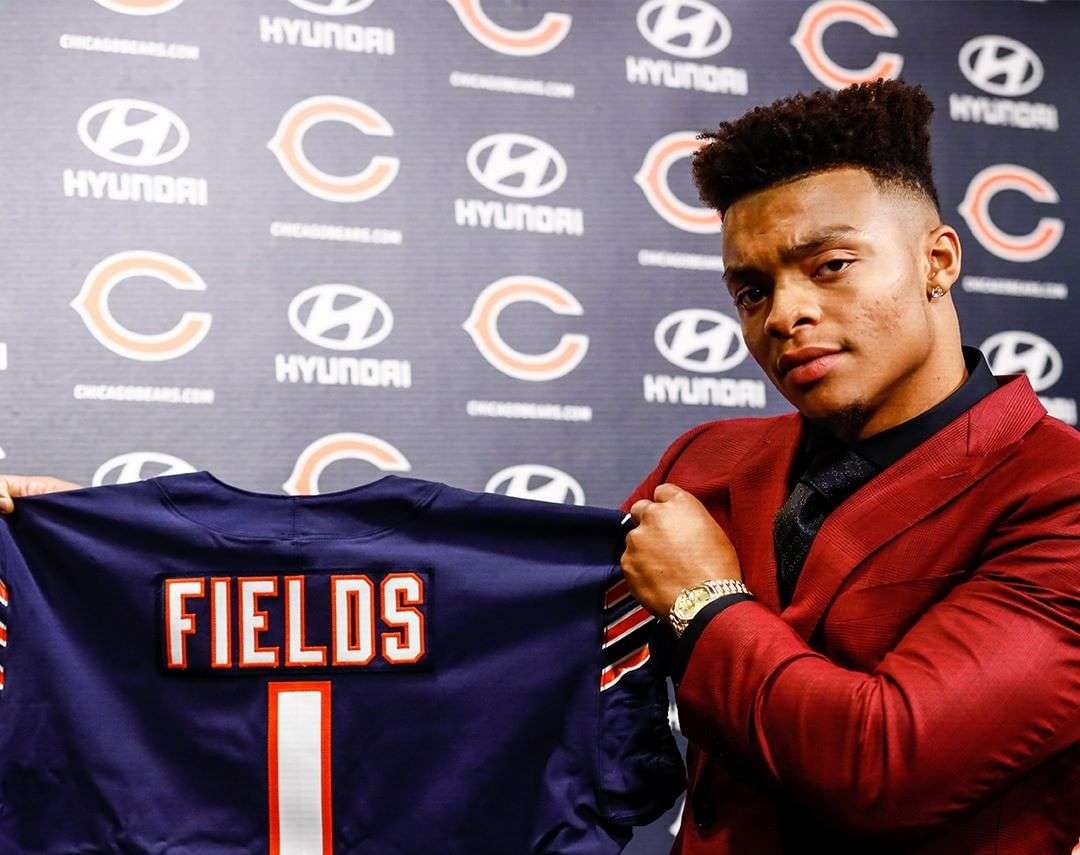 Last week kicked off the annual NFL Draft for the league’s upcoming season. And we think we speak for a lot of Chicago Bears fans when we say the Bears did not disappoint. In this year’s draft, Chicago came in with eight picks across the board. One in each of the first three rounds, another in the fifth, and four in the sixth round. But some of the Bears’ draft picks didn’t even make it past day one.

Pace and Nagy were certainly busy this year as they once again jumped ahead in round one to grab their guy at quarterback. If you’ve been hiding under a rock since last Thursday, don’t worry, we’ll fill you in on all the action from the Chicago Bears draft room. The front office sure made us look like fools with our own mock draft. But we don’t mind it at all given how everything played out. So with that, let’s dive into our recap of how Chicago did this year and grade the Bears’ draft picks.

Is that too much to give up for your potential franchise play caller? Absolutely not. Fields was ranked by many as the third best quarterback in the draft. But despite all of his potential, he surprisingly fell down the board as the draft went on, and the Bears couldn’t pass up their chance. He ended up being the 4th quarterback selected overall, out of five taken in the first round. Justin Fields is as big of a dual threat as they come. He’s comfortable dishing passes out of the pocket and can extend plays and drives using his 4.44 40-yard dash speed. If the Bears keep him protected and healthy, we can only imagine what his ceiling will be. And when it comes to quarterback protection, that was definitely a focus with Chicago’s next pick in the draft…

After going all in on Justin Fields, the Chicago Bears didn’t let their foot off the gas on day 2. In the second round, the Bears were set to have the 52nd pick, which is essentially #20 in that round. But yet again, Pace pulled the trigger and went after a big guy to protect his new quarterback by selecting Tevin Jenkins out of Oklahoma State with the 39th overall pick in the draft. Jenkins was practically a steal for us at 39. He’s big, tough as they get, and has what it takes to be a star in this league. Plus, Jenkins can immediately fill in for Chicago in an area they desperately need him in.

The Rest of the Bears’ Draft Picks

For day three, the Bears’ draft picks were mostly in the sixth round after all the deals they made, with one in the fifth and another in the seventh.  Right away, Pace used  his first pick of day 3 in round 5 at #151 overall to select offensive tackle Larry Borom from Mizzou. Borom isn’t set to make quite of an immediate of an impact like Jenkins can. However, in time, he could develop into a key piece on our o-line.

In the sixth round, the Bears had three selections at #217, 221, and 228. They used these picks on Khalil Herbert, a running back from Virginia Tech, Dazz Newsom, a receiver from UNC, and Thomas Graham Jr., a corner out of Oregon. With Herbert, the Bears have the opportunity to mold him as a returner for special teams while Newsom will add some speed to the receiver core. Graham has a chance to earn a starting spot right away on our roster as we have an open starting corner spot with the release of Kyle Fuller. And with the selection from the Chicago Bears draft picks, the team went with defensive tackle Khyiris Tonga out of BYU. He’ll have to fight for his spot, and the Bears are going to be willing to give him that opportunity.

Not a lot of us fans had these high of expectations entering the 2021 NFL Draft. After taking the leap for Fields and making even more moves to build up the offensive line, Pace and Nagy should pat themselves on the back for this draft. If we had to grade them, we’d give them a solid A. They addressed some of the biggest needs for our team and didn’t overreach for a guy that didn’t make sense. And if everything plays out in our teams favor, the future of the Chicago Bears looks very bright.