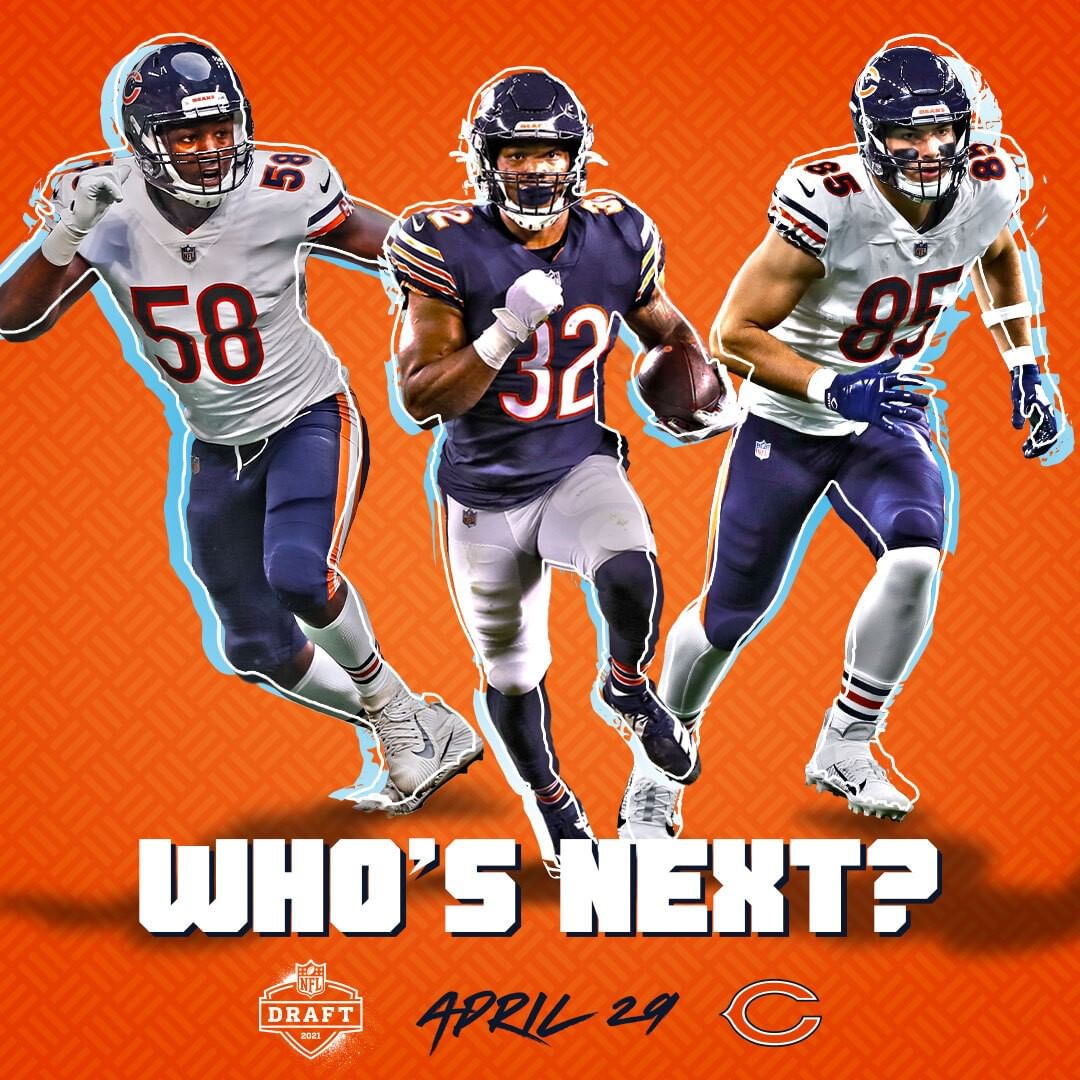 NFL draft week is finally here! For many football fans around the league, this time of year can bring a wide range of emotions. If you’re a fan of any of the best teams in the league, you might be wondering what talent your team can find with their later picks as they look to build on their success. But, if you cheer for a bad team with a high draft pick, you’ll either be nervous or excited with no in-between. And really, it all comes down to the faith you have in your team’s front office staff for the 2021 NFL draft.

For us Chicago Bears fans, it’s safe to say that the overall faith in the organization to make the right moves come draft night has dwindled slightly. The big reason for this comes from 2017 draft night when the Bears traded up to draft Mitchell Trubisky with the second overall pick. There were many groans and sighs with that choice, and some say you can still hear those groans echo through Halas Hall if it’s quiet enough. Regardless of how you feel about Pace and Nagy leading this Bears draft, they’re going to do what they think is best for this team. And we’ll be right here rooting for them along the way, but before they can make their picks, let’s dive into a quick Chicago Bears mock draft!

The 20th draft pick is the highest first round pick we’ve had since Pace has been a GM. It also happens to be his first one outside the top 10 since coming to Chicago. In Ryan Pace’s pre-draft press conference, he made one thing clear about this pick: the team could move up, down, or stay put. It truly is all up in the air.

We can’t predict if the Bears will stay at 20. But, we’d like to think we have a good idea at what position they’ll be going for. The needs for this team are clear, a future quarterback, rebuilding the o-line, and adding pieces on both sides of the ball. With that, we like to think that the Bears either go quarterback, cornerback, or maybe wide receiver at this spot. The wide receiver class in this year’s draft runs deep, so the team shouldn’t have trouble finding talent with a later pick. As for cornerbacks, there is some premium talent Jaycee Horn, Caleb Farley, or even Greg Newsome II. The Bears shouldn’t draft up if they go with this position, but we can see them leaning this way as they look to replace Kyle Fuller this year. Should the Bears go with a quarterback at this spot, they’ll most likely miss out on guys like Trevor Lawrence, Justin Fields, and Zach Wilson. This leaves them with Trey Lance or Mac Jones as the possible remaining top talent. All options are on the table, and if we have to pick, we’re going with cornerback Greg Newsome II out of Northwestern.

After going with a cornerback in the first round of our mock draft, the Bears will certainly look to add something on the offensive side of the ball. But whether it’s a quarterback or offensive lineman remains to be seen. If we had a say in it, we’d like to think they’d look towards building up that offensive line. The area is one of the most important pieces of success for any football team. It also happens to be one that Chicago has struggled with recently. They won’t be able to develop any future QB without a line to protect him, so this is where we think they go. With the 52nd pick in our 2021 NFL mock draft, the Chicago Bears select Jalen Mayfield from the University of Michigan.

The final pick we’ll be predicting in our mock draft is the Chicago Bears 83 pick in the third round. They went cornerback and offensive line in our first two mock rounds. And now they’ll be looking to add another weapon on offense. Based on the picks of Cole Kmet and David Montgomery in years past, we’ll be taking our mock pick to the wide receivers. This draft class is particularly loaded at this position, and things continue to look promising when it comes to the later rounds. Because of this, our mock pick for the Bears in the third round of the 2021 NFL draft is WR Nico Collins, another Michigan alumni.

No matter how this draft plays out for the Bears, they’re almost certain to be in a better position for the future after it concludes. No one can confidently pick who Pace & Nagy will pick in round one, and we’re pretty sure they don’t know which direction they’re going either. It’ll all come down to the moment and the picks beforehand, and we’ll be locked in to all the action come draft night on Thursday, April 29!

And speaking of NFL action, you can take part in the fun by visiting your favorite online sportsbook today. The Bears are sure to be a hot betting ticket this year thanks to Justin Fields and other new stars.