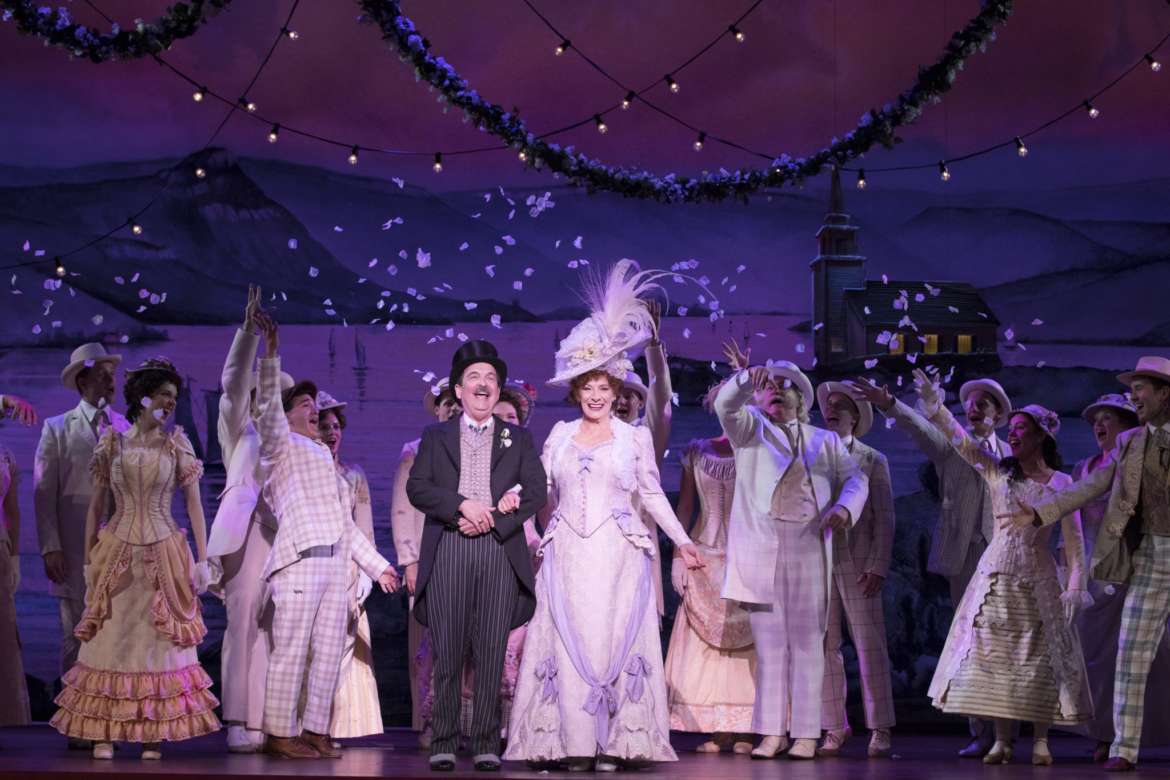 It’s hard to argue with success, especially when it’s the four-time Tony Award®-winning Best Revival of a Musical Hello, Dolly! which has been enchanting audiences for years. Full of life with a real steam engine train, singing waiters, and glorious sets depicting the year 1885, the show is a fabulous revival running in Chicago only through November 17.

Starring Tony Award®-winning Broadway legend Betty Buckley, Hello, Dolly! is the consummate American musical featuring  Jerry Herman’s memorable music, outstanding choreography, gorgeous costumes, and a happily-ever-after ending that will have you singing your way out of the theatre.

This National Tour of Hello, Dolly! pays tribute to the original work of legendary director and choreographer Gower Champion, considered one of the greatest stagings in musical theatre history.

Hello, Dolly! tells the story of a down-on-her-luck widow and matchmaker Dolly Gallagher Levi (Betty Buckley), who wants to marry the “half a millionaire” Horace Vandergelder of Yonkers, New York. Veteran Broadway actor Lewis Stadlen plays the crusty Horace with gusto, evoking memories of Walter Matthau in the movie version with the same voice and accent. He is a joy to watch.

Rounding out the story are Vandergelder’s hapless shopkeepers, Cornelius Hackl (Nic Rouleau with a glorious voice) and Barnaby Tucker (Jess LeProtto, who wins the audience with his hysterical antics). Mention must also be made of Analisa Leaming, who is excellent as hat shop owner Irene Molloy. Her operatic voice is a perfect complement to Rouleau in their duet of “It Only Takes a Moment.”

Buckley knows her way around the stage and is simply phenomenal as Dolly, touching on every nuance and belting out every song with all of her heart. She’s an award-winning performer on both Broadway and TV in Eight Is Enough. Particularly poignant is “Before the Parade Passes By” in which she tells the audience she’s not ready to give up on life. She’s the star in every sense of the word.

Led by four-time Tony Award®-winning director Jerry Zaks and choreographed by Tony Award®-winner Warren Carlyle, the entire creative team of the Broadway production reprises their roles. The choreography will simply take your breath away as dancing waiters hit the stage, and you’ll wish the Hello, Dolly! anthem would go on forever.

Hello, Dolly! is the perfect show to introduce youngsters to the magic of live theatre. Hello, Dolly! is playing at Broadway in Chicago’s historic Oriental Theatre at 24 W Randolph St. For tickets, head here.