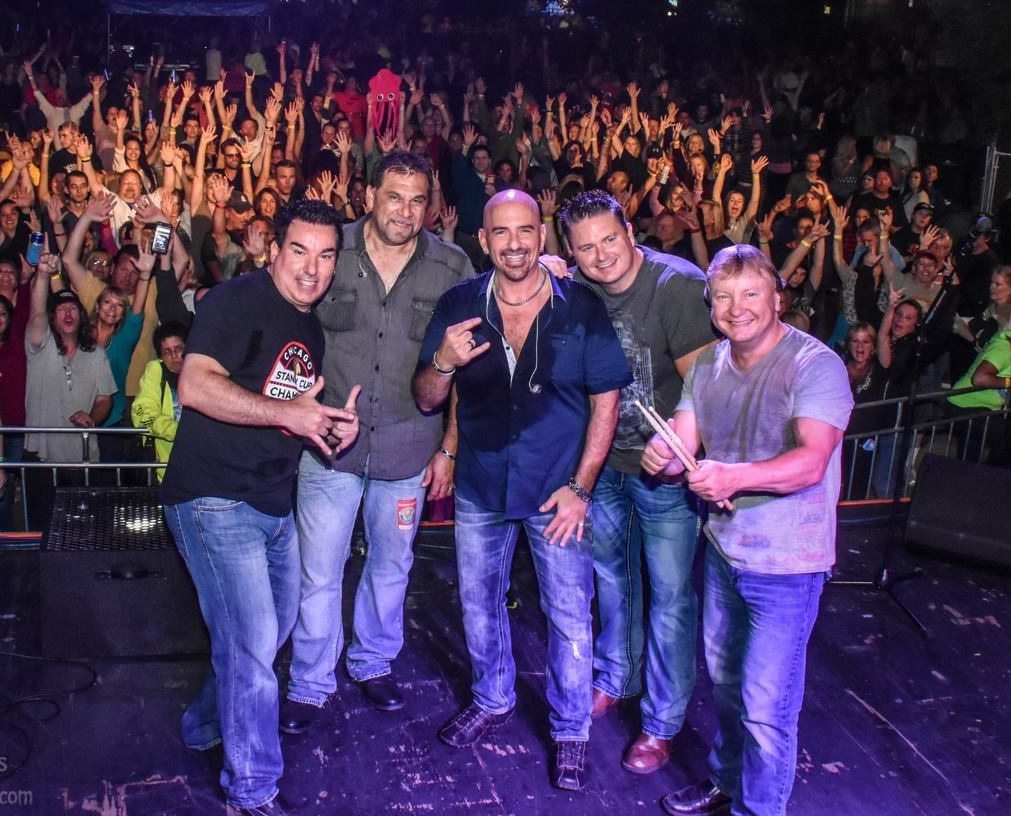 It’s not every day that we get the chance to sit down with one of Chicago’s longest-tenured and most popular local bands, so when 80s cover band Hi Infidelity responded to our interview request, we jumped at the opportunity. We spoke to lead vocalist Dave Mikulskis about the band’s secret to longevity, their future plans for original music, and Adele (yeah, we’ve jumped on the bandwagon, too).

Hey Dave, thanks for taking the time to meet with us. Let’s kick things off by telling us a little bit about the band and what you do.

“I joined Hi Infidelity in 2001. I’d been in other bands before, but this is the first that plays out this frequently. We perform anywhere between 80 and 100 shows per year for the past five years, and we play in and around the Chicagoland area. We have a few shows per year in the city, but mostly we’re in the suburban areas. We play regularly as far south as Mokena, as far north as Antioch, and as far west as DeKalb. We blanket the entire Chicago metropolitan area and beyond. Actually, we’ve been in Kenosha and Racine, too, so we’re up in Wisconsin, as well.”

“We’re primarily a cover band with a focus on the 80s rock band era. We cover the 70s, 90s, and some music from today as well.”

You mentioned joining the band in 2001, so obviously you guys have been together for a long time. This isn’t an easy feat in today’s world. What’s the secret to staying together for so long?

“The key to staying together is the same for any relationship; communication. It’s like a relationship between two people – but now it’s between five people. Everybody wants to do something a little bit different, but we have to do what’s best for the band. We all have opinions and everybody gets to voice that opinion.”

“To be able to balance that isn’t easy. Not everyone in the band has the same exact musical tastes, but we know what the brand is and we know what the people who come out to see us expect. There’s no formula, though. Sometimes we just pick a song, throw it against the wall and see if it sticks. If it doesn’t, we go back to the drawing board and we try something else.”

Well it sounds like you’re living the dream by getting to do what you love.

“Yeah, it’s been great. It doesn’t feel like a job. I think that everybody else in the band would agree that we all wouldn’t be playing as much as we do if we didn’t love it.”

Where did the name Hi Infidelity come from?

“The name comes from the band REO Speedwagon’s 1980 best selling album of the same name. A lot of local bands were taking the names of albums from rock bands that were around in the 80s for name recognition.”

How would you describe your shows to people who haven’t had the chance to see you live?

“We take pride in replicating the bands that we cover the best we can. We’ve got a high-energy show, great harmonies, and have quality musicians. We want to make each show a concert experience. We want people to feel like they’ve just left a concert as opposed to a bar or festival and we focus more on keeping the energy up and recreating the songs as people remember them.”

What goes into choosing which songs & artists to cover? Do you have a typical set list that you use for a while?

“That’s a good question – it’s one that people ask us a lot. For every show, we have a certain amount of core songs that we play. If we perform on a Friday and then a Saturday, the set list is different each night, not only the order of the songs but also the actual songs. We try to play a different ten or twelve songs out of 30 or 35 for each show so people who come out on both Friday and Saturday won’t hear the same exact set.”

“That’s kind of critical in my opinion. You tend to get people to come for repeat performances when they know they’ll hear  different songs. We don’t ever want people to think, ‘Eh, I just saw them yesterday. They’re going to play the same songs tonight.’”

“We try to mix it up, put some new stuff in there, and we try to keep it fresh. Every six weeks or so we add two new songs to the mix and keep the set list cycle going.”

For six consecutive years, Hi Infidelity was voted the Best Rock Cover Band, you were voted the Best Vocalist and, in 2010, Bobby Scumaci was voted Best Keyboardist in Suburban NiteLife Magazine’s Best of the Burbs contest. How much do the accolades mean to you?

“It’s been great because these were voted on by the fans. Every year, one of the local magazines holds a reader’s poll, and every year our fans voted for us. It’s nice to know that we have the support from the people who come out to see us and that they do care. We have a core group of fans who come out to a lot of our shows and I think that is a testament to – not only our shows being a kind of social event – but at the same time, our connection with them. I guess we must be doing something right. They could go see any number of bands. There are a lot of good bands that play around town, but they choose to follow us.”

You play a lot of shows around Chicagoland each year. Have any of them stuck out to you as being particularly special?

“We do, probably, 30 to 35 festivals every summer, and a lot of them we play every year. DeKalb Corn Fest is a great venue for us with anywhere between 10,000 and 12,000 people that attend. That’s always a great time. It’s a great stage, they treat us well and the following that we have in DeKalb is awesome!”

“We play on the northwest side of the city at the Norridge Island in the City Festival every year, which is another great one that kind of sticks out for us. And, all of the bars we play are always a fun time.”

You have a loaded schedule coming up over the next couple months. Aside from continuing to rock through the New Year, what does the future have in store for Hi Infidelity?

“We’re currently working on an album of original songs that we’ve written individually and collectively. We hope to have that out by the summer. We’re excited to take some original songs and eventually play them in our set. That’s kind of unique. Not a lot of cover bands do that.”

What has influenced your original sound as a band? Would you compare it to the 80s songs you cover?

“It’s definitely influenced by the mid to late 80s rock bands: Journey, Bon Jovi, etc. They’ve got keyboards, pianos, great guitars. There’s a little bit of everybody. We’re all influenced by what we know best.”

With all of the new music you’re recording, how does that differ from getting together and practicing songs you already know from the past? Is it difficult to get everyone on the same page?

“It’s interesting because everybody has their own home recording studio. You take a rough cut of a song and play as much as you can by yourself and pass it on to the next guy. He then listens to it and adds his own flavor and suggestions. Everybody has input. It’s almost the same as learning a cover song because one guy will come up with the core structure of a song and everybody else will add their own ingredients to it from there.”

Obviously you’re a musician, so you probably have better musical taste than the rest of us. What are you listening to these days?

“That’s a good question. Let’s see. I like bands like Shinedown, Nickleback, Maroon 5 and Bruno Mars. Those are the newer artists I’m into. I don’t usually listen to the bands that we cover just because we play them so much. I try to get a different take. I listened to Adele’s new album. I had to get on the bandwagon and see what the hell everyone was talking about with her latest.” [laughing]

“Walk the Moon is great, too. We actually started covering one of their songs for our shows.”

What would you say to someone who’s on the fence about booking you for an event?

“We usually say – because it’s true – any event that we’ve ever played, people don’t walk away disappointed. Potential buyers tend to know the kind of music that we play before they want to hire us. But anytime we’ve performed at an event, whether it’s corporate – which we do a lot of – or any of the bars & festivals that we play – people never leave disappointed.”

Hi Infidelity has a healthy diet of shows coming up over the new couple months. You can check out their schedule and listen to their tunes at hiinfidelity.co.