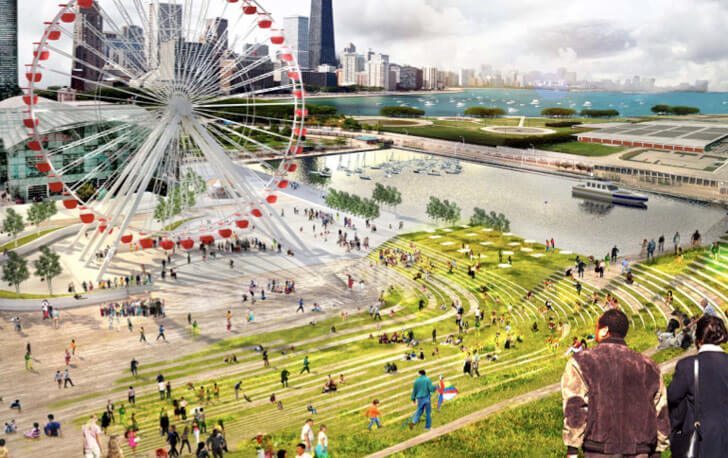 The new Ferris wheel is just the beginning.

Navy Pier celebrates its 100th birthday this year, and Illinois’ number one tourist attraction is commemorating it in a big way – by changing virtually every aspect we’ve seen thus far.

Let’s start with what we have now – the carnivalesque experience that caters to tourists and their children. As we’ve seen over the years, it certainly serves its purpose… but it really doesn’t showcase anything about the city of Chicago. While some have argued that moving away from the amusement park ideology could be detrimental to the city’s overall tourism draw, there are some undeniable flaws that need to be reconciled if we’re going to take the next step.

For one, it’s fairly difficult to get to. The pier’s parking is atrocious, and the current entrance is usually overflowing with vehicle traffic. Not to mention the interior of the pier evokes memories of a shopping mall, and the food is far from the authentic Windy City cuisine that Chicago’s biggest attraction should offer.

The good news? Navy Pier’s upper-echelon staff knows everything we’ve mentioned, and they’ve already begun taking steps to change nearly all of it. Their plan, known as the Centennial Vision, will give Navy Pier a complete facelift over the next few years. Here’s what we know so far. 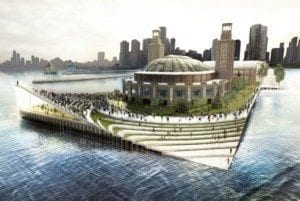 The Pierscape refers to the actual pier area, or pier landscape. The new changes will include the introduction of public art, water features and relighting of the Pier’s exterior. These new municipal components will be environmentally friendly… and this time they won’t look like they were plucked straight from Ringling Bros. Think of the new changes to the Riverwalk and imagine them at the pier. Now you’re on to something.

With a focus on unique, diverse Chicago products, the South Arcade will be reimagined as a Chicago-themed food area. We don’t know much about the food just yet, but we’re willing to bet you’ll see your fair share of pizza, hot dogs, and beef sandwiches. 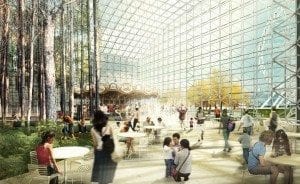 The Family Pavilion is Navy Pier’s entry hall. Here you’ll find family-friendly activities, restaurants, retail shops, and kiosks with an authentic Chicago twist. On the surface, it sounds similar to the current interior that’s already in place, but Navy Pier’s staff has assured us that all of the changes will be less commercially-based and ultimately, more people-centric.

The Festival Hall is where the majority of Navy Pier events are staged. Annual entertainment options like SOFA, Winter WonderFest, and the Chicago Flower and Garden Show aren’t going away anytime soon, so count on this area continuing to host these events and more while creating better connections to the surrounding areas.

Navy Pier has long been seen as a place for families and young children. While that won’t change, one of the main focuses has been on increasing the pier’s appeal among adults. They’re doing this in two ways: allowing open alcohol (yeah, seriously), and creating new musical and performing arts events. 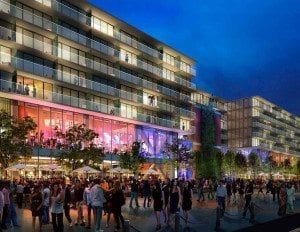 That’s right, the pier is looking to add a small hotel on the east end of the pier. The idea hasn’t been finalized, but there have been discussions of adding a restaurant and rooftop terrace for dining and special events. Projections believe they can add between 150 to 225 hotel rooms without altering the current visual footprint we see now. They’ll also push for south facing rooms with Lake Michigan and Loop views. 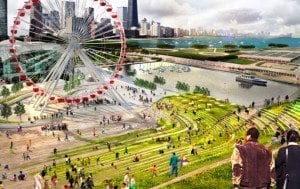 This one was all over the news a while back, and for good reason. The 196-foot-tall wheel is unlike any other in the U.S. It comes equipped with two-sided cars, TV screens, and speakers. The padded seats can hold up to 10 people (up from the past maximum of six). Ride times are also set to increase from seven to 12 minutes, and the wheel will circle around three times instead of just once.

Temperature controlled gondolas mean that the Ferris wheel will be open year-round. And from a protection standpoint, it will also feature safety glass capable of withstanding severe storms and winds of up to 115 mph.