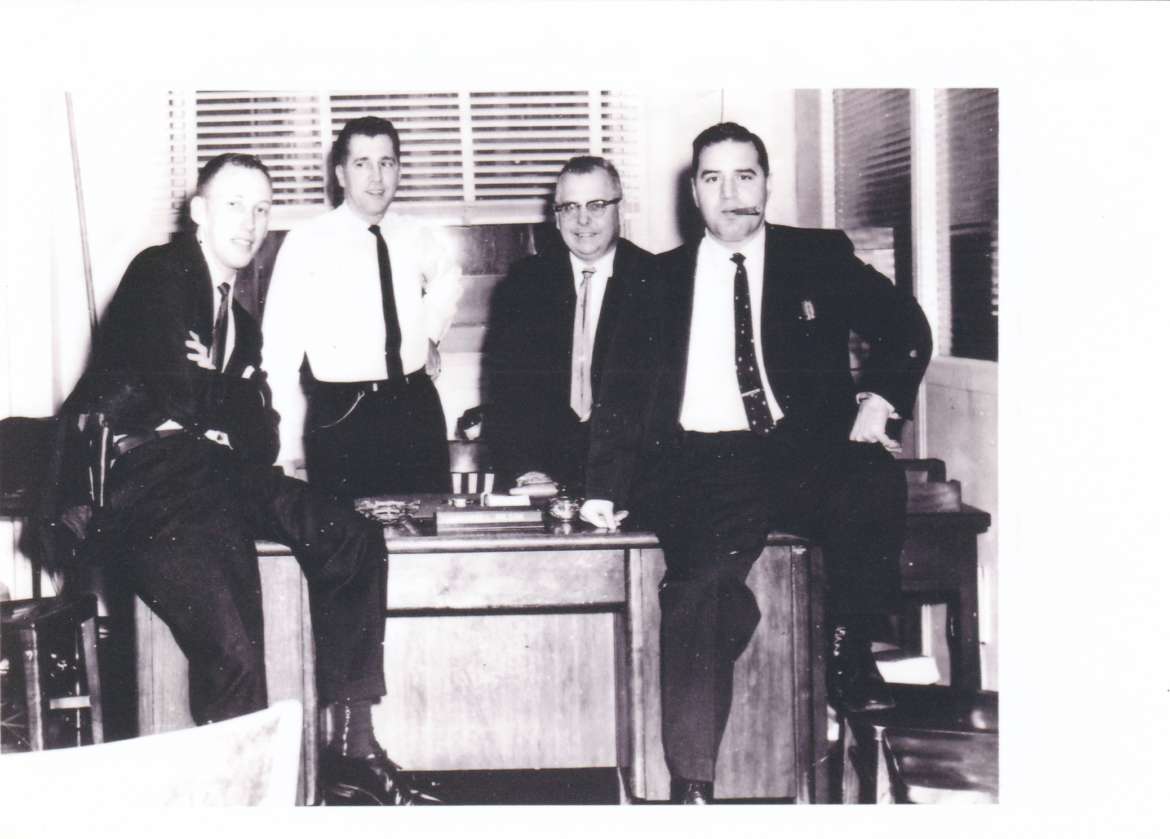 “You’re gonna need a cape,” a federal agent laughingly commented to Bob Fuesel, after he “somehow” got a confession from a mob-connected underling.

“How the hell did you do that,” the undercover agent asked Fuesel. “At the rate you’re going, taking down these mobsters you’ll need a cape and bulletproof underwear.”

“I convinced him that it was in his best interest to talk to me,” Fuesel replied with a smile.

That low-key comment from Fuesel belied the fact that he had just saved a government witness from being murdered by contract killers tied into organized crime bosses from the Chicago mafia.

Bob Fuesel, a Special Agent for the Internal Revenue Service-Criminal Investigations Division (IRS-CID), had been sent from Chicago to Phoenix to protect a witness against crime boss Sam Battaglia. In the strict hierarchy of organized crime (OC), Battaglia was second in command to Tony Accardo, the local OC “Chairman of the Board.” Accardo was heir to one of the biggest names in what later became known as The Mafia, run by Al “Scarface” Capone.

Fuesel and a squad of agents investigating Battaglia, finally managed to convince several witnesses to provide testimony although it put their lives in danger with the Chicago mafia. During the trial the judge accidentally permitted the home address of a prosecution witness, who lived in Phoenix, to be entered into the record. A potentially fatal mistake.

After Battaglia’s conviction, Fuesel, at the direction of the U.S. Attorney, accompanied the witness back to Arizona. He was told to be prepared to get on the next plane, after the man’s testimony, to Arizona to protect the witness from the Chicago mafia.

An inkling of what was to come gave them a glimpse of the danger the witness was in when his business was blown up before they arrived.

Along with another federal agent, Fuesel set up camp in the witness’s home. It wasn’t long before a stranger showed up at the door. The two agents collared him and Fuesel and took them into a room for a “private discussion.”

“He finally admitted that he wasn’t sent to kill the witness; he was there to lay the groundwork for a hitman who had the contract,” Fuesel said. “I had a heart-to-heart discussion with him and convinced him that it was in his best interest to cooperate.”

Fuesel never laid a hand on the suspect, but the discussion today could have been described as “Enhanced Interrogation.”

It saved the witness’ life. Another witness wasn’t so lucky. Following the trial, several key witnesses were placed in the IRS Witness Protection Program, one who declined the offer paid with his life. His body was found in the trunk of a car in Chicago’s northern suburbs.

“I had to identify the body and it was evident he had been tortured,” Fuesel remembered. “I asked the police not to notify the press because I had to inform his wife. That was one of the most difficult parts of the job. But no one we had put in the protection program ever came to harm. We never did find out who killed him.”

Fuesel’s laidback manner belies the strength he has shown when necessary. About five-foot-ten, Fuesel has white hair sprinkled with dark strands and a moustache decorating his upper lip. He looks more like Mr. Rodgers than a mob-busting federal agent. The soft-spoken Fuesel, however, could strike fear into the hearts and minds of those in the Chicago mafia he was charged with investigating and bringing to justice.

Chicago, like any major city in the United States, had an on-going problem with organized crime. The OC families divided the country into their own zones of influence and overstepping the boundaries could bring dire consequences.

“In those days robbery, extortion and gambling were the major courses of income for the criminals. Drugs hadn’t yet become the serious problem it is today,” Fuesel said. “Robbery and hi-jacking helped fund the gangs.”

In fact, he noted that the mob bosses in the Chicago mafia discouraged their underlings from drug dealing.

Fuesel was assigned to investigate, in conjunction with the FBI, the largest hi-jacking of silver by the mob. The FBI ran the investigation and 13 mob members were arrested and convicted. The FBI case fell apart when the verdict was overturned.

The U.S. Attorney called for help and Fuesel was assigned to the case. He “turned” the mobster responsible for sale of the silver and built such a solid case that five of the robbers came into court and pleaded guilty.

While his time in IRS-CID was after the famed “Untouchables” and Elliot Ness, Bob Fuesel did get to know several of them and was asked to act as an advisor when the movie of the same name, starring Kevin Kostner and Sean Connery, was filmed in Chicago.

“I had my 15 minutes of fame when they put me in several scenes,” he wryly noted. When asked why he wasn’t seen when The Untouchables played in theaters, his frown lines curled down. “I ended up on the cutting room floor.”

With his reputation building, Fuesel was assigned to work with the Secret Service Presidential Detail protecting President Lyndon Johnson. He worked both on the street and in a car.

So solid was his performance that he was assigned as assistant to the Secret Service Agent-in-Charge of the protection detail for presidential candidate Eugene McCarthy at the Blackstone Hotel.

Chicago’s notorious “Rush Street” was lined with bars controlled by local OC bosses. Fuesel came in working undercover, the most dangerous job any agent could be assigned to. He often worked until the early hours of the morning, easing his way into the confidence of the gangsters. The Chicago mafia mobsters were able to increase their profit margin by diluting the booze served to unwitting drinkers. Fuesel spotted the scam and with his reports in hand, the Alcohol, Tobacco and Firearms Agency (ATF) staged a massive raid on the mob-controlled establishments and put them all out of business.

In 1970, his efforts brought recognition from the government when he was promoted to Supervisor and put in charge of the International Narcotics Traffickers Program. He worked directly under Eugene Rossides, the Assistant Secretary of the Treasury for Enforcement.

Bob Fuesel’s efforts in this position dealt a severe blow to Mexican drug dealers and sent several of them fleeing to Mexico to escape prosecution after his investigations. He worked with the Chicago Police Department to take down other drug dealers, an occupation that organized crime had now jumped into with both feet. The financial rewards to the Chicago mafia members outpaced gambling, prostitution and most any other illicit activity they previous were involved in.

Their efforts came to the attention of the press and the vice-president of Chicago’s ABT-TV station noted that “Credit for the reduction of drug deaths in our city and county should go to the IRS and CPD who seized more than $3 million dollars last year (1972). IRS hopes to eventually dry up the big money behind the ordinary street peddler and slow the narcotic traffic here.”

Recognized by his peers, Bob Fuesel was elected national president of the Federal Criminal Investigators Association, a professional organization with members from every agency with the exception of the Central Intelligence Agency.

With this title under his belt, Fuesel was a guest at the White House meeting with such representatives as Nancy Reagan to discuss ways to curb drug use, especially amongst young people. He was also with a small group of crime fighters invited to meet in the Oval Office with President Ronald Reagan.

He moved into several strike forces through the 1980s until his retirement in 1986. His retirement party was attended by more than 400 people from both law enforcement agencies and government officials. The Master of ceremonies was Ron Koziol, crime reporter for the Chicago Tribune. The guest speaker was Matt Rodriguez, Chicago Police Department Superintendent.

Not long after he opted to private life he was brought back to crime-fighting and was appointed Executive Director of the Chicago Crime Commission. His reputation growing, he was then chosen president of the National Association of Crime Commissions.

He left the Chicago Crime Commission in 1995 and has devoted himself to working as a volunteer with his church parish, the Incarnation Catholic Church and was named a Lay Minister. He is also an administrator for the Adoration Chapel and Shrine for Our Lady of Fatima.

“After seeing the worst in people,” Fuesel, said, “I am enjoying the better part of life in the church.”

Fuesel, a Chicago native, is first-generation American. His mother emigrated from Poland in the early days of the 20th Century. His dad, Joseph Fuesel, was of German heritage and was born in the United States.

Things didn’t come easy to the Fuesels. Bob Fuesel graduated from St. Gall Grammar School in 1950 and St. Ignatius High School four years later. Tuition for the high school was somewhat out of reach for the family and he was awarded a scholarship for the poor.

Fuesel went to Loyola University, paying his way by working more than 30 hours a week at Goldblatt’s Department Store. He graduated with an Accounting degree and immediately joined the Internal Revenue Service.