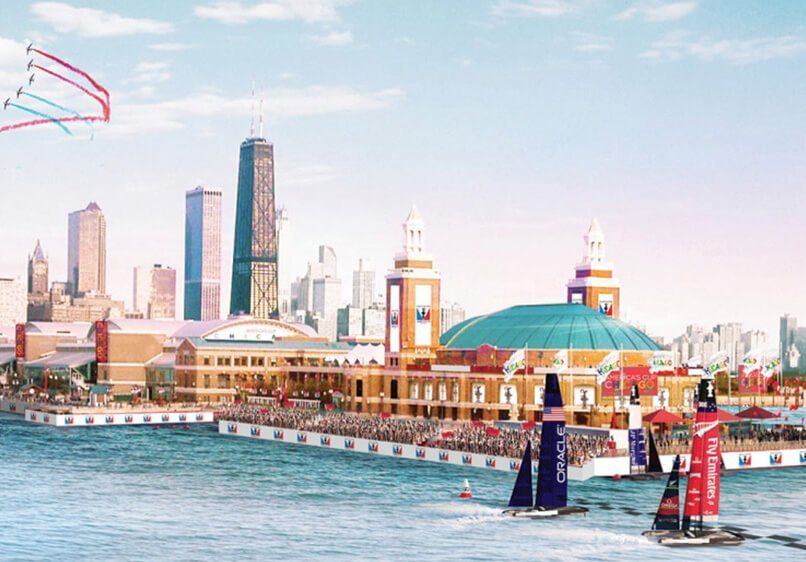 This past Saturday marked the 35th America’s Cup, an annual tournament representing the world’s best in boat racing.

Flocking to the pier was just what the doctor ordered for Chicagoans out and about in the weekend’s heat. In this case, they were able to join friends from far places to watch some of the world’s most talented sailors take to the waters for a nearly two-decade-old tradition.

Teams from Japan, New Zealand, Britain, Sweden, France and the United States gathered for the event on Lake Michigan. While the Windy City was the final stop of 6 cities chosen to host the sporting event, it sure came up short on its nickname, as the barely breezy afternoon forced the competition to delay for hours after its scheduled start time.

Due to the uncooperative weather, event officials resulted in counting Friday’s practice session as the first race. The event concluded on Sunday in friendlier weather, with team Artemis Racing of Sweden reigning victorious and Britain’s Land Rover Bar taking second place. Sharp turns at high speeds were some of the highlights of the races, bringing excitement to viewers and higher stakes for the competitors.

Out of towners were thrilled for the excuse to visit Chicago, making it likely that the city will be added permanently to the boating event’s roster. Long-term benefits could include an added boost in the city’s tourism and more points for being a world-class hub that’s capable of holding major international events. The competition’s next stop is Portsmouth, England, which runs from July 22-24. In 2017, Bermuda will be home to the America’s Cup.

Be sure to keep an eye on boats possibly setting sail on Lake Michigan again for next year’s event!