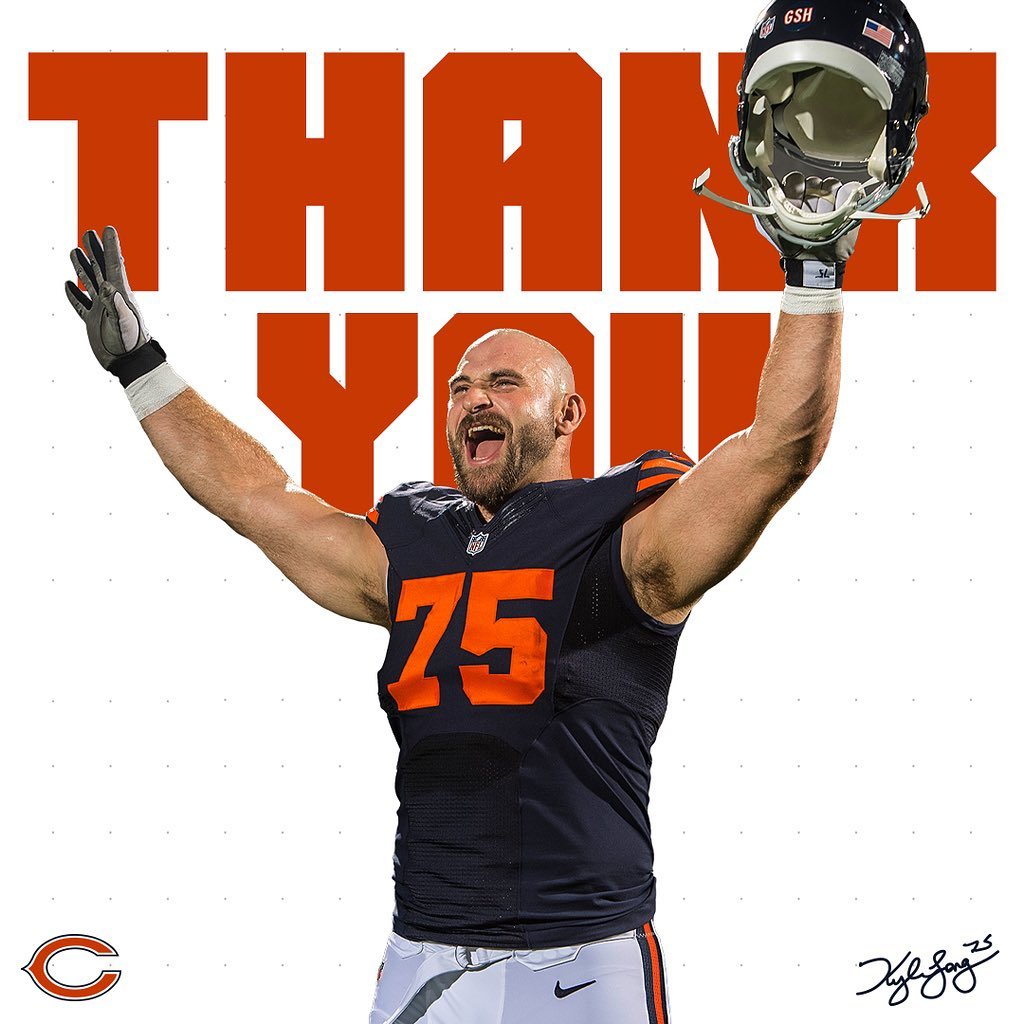 Kyle Long’s retirement announcement came via Twitter this past Sunday. The news marks an end to his 7-year professional career, where he spent every season on the Chicago Bears.

Some chicagoans are probably happy to hear I’m finally stepping away and getting my body right. Some Chicagoans may be sad to hear this. Either way ufeel about it, I want u to know how lucky I am to have spent time in your city. I became a man while playing in Chicago.Thank you❤️

During his time as a Chicago Bear, Kyle Long made an impact immediately with a Pro Bowl selection his rookie season. He followed that up with two more Pro Bowl selections the following years, even earning second-team All-Pro guard honors in 2014. Unfortunately, injuries plagued him towards the end of his career and caused him to miss 34 games in his final four seasons. These injuries ultimately played a part in Kyle Long’s retirement decision before the 2020 season.

Special thanks to Phil Emery, Marc Trestman and the rest of that staff for bringing me in. Thanks to and happy birthday to the young lady named Virginia as well. Ryan pace, thank you for keeping me around as well 🙏🏼

In Kyle Long’s retirement tweets, he thanked the fans as well as upper management in the Bears organization for keeping him around throughout the years. Support poured in quickly for the All-Pro offensive lineman. Many fans realized they’ll never see #75 take the field on Sunday again.

Win or lose, Kyle always was straight forward, respectful and available. Three things that are equally as important as they are rare. No doubt he will be missed! Good luck @Ky1eLong https://t.co/h3PjY25CxT

After taking a salary reduction this past season, Long’s current contract with the Bears included a club option for 2020. The team could keep him for $8.1 million, a decision that general manager Ryan Pace knew he would have to make. When speaking to the media, Pace had his own thoughts on the contract situation: “We think the world of him. It’s unfortunate he’s had a handful of injuries and he’s tried to battle through all of them. Kyle does have an option in his contract that we’ve got to look at. That’ll be one of the many decisions we have to make on him. But I feel bad for all the injuries he’s tried to overcome. That was a decision we made at the time, and we’ll have to make another decision this offseason with his option.”

After Kyle Long’s retirement decision, Pace had his decision already made for him. While it’s unfortunate to see him go, it is ultimately for the best. Not many players continue playing after injuries year after year. And after 7 hard fought seasons, Long’s career will come to an end. The Bears selected Long with the 20th pick in 2013, and he remained loyal to us ever since. For the years you spent protecting our quarterbacks, and the countless times you beat up on our rivals we’d like to give one final thanks to Kyle Long. Enjoy your retirement!