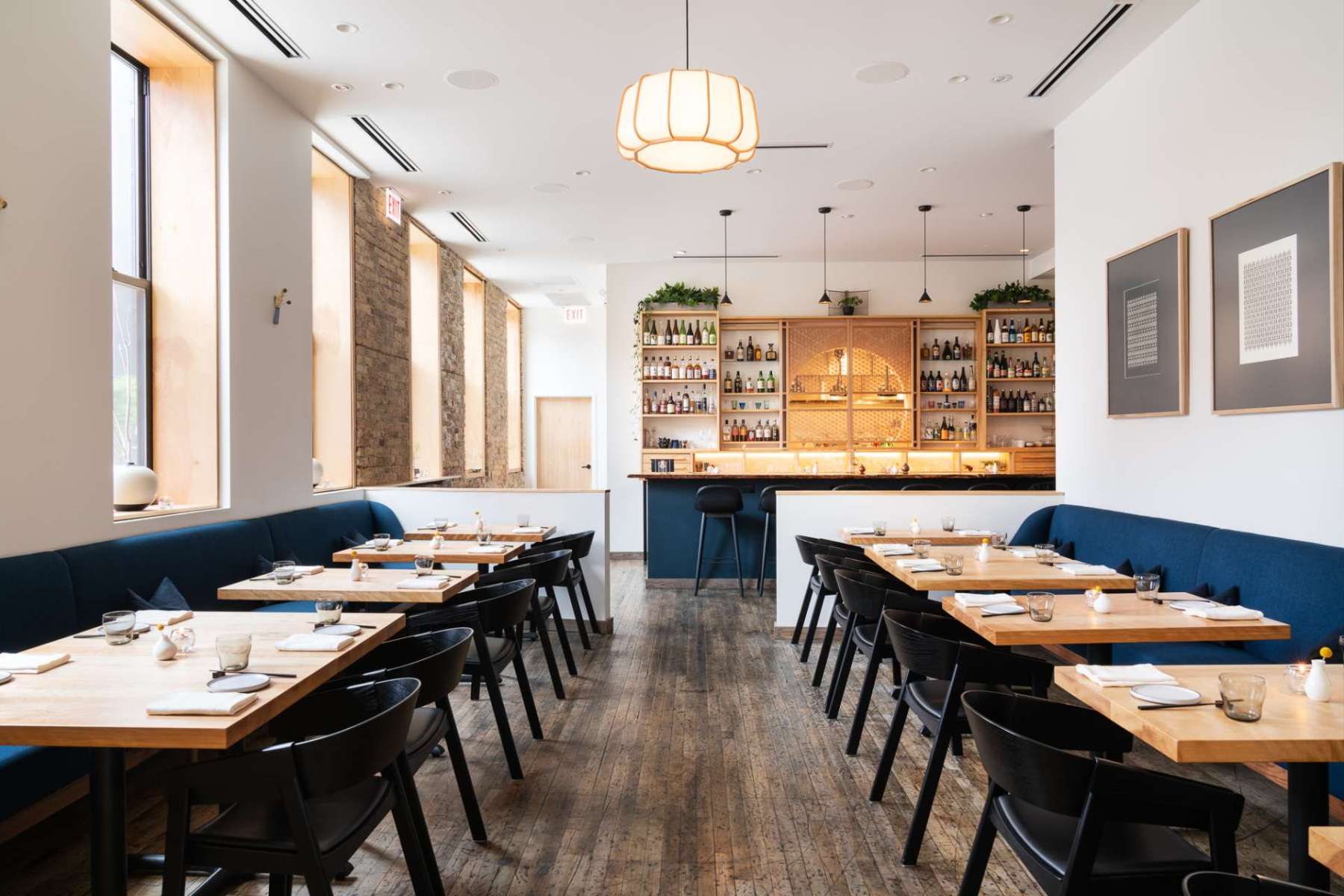 As this year’s Pineapple Hospitality Award winner and the pioneer who made alcohol delivery possible for Chicago restaurants amidst the pandemic, Julia Momose is undoubtedly a heroine character according to many in Chicago’s restaurant industry. Meanwhile, veteran foodies know her as one of the top mixologists in Chicago, and the owner of the beloved Whiskey heaven — Bar Kumiko.

This time, the Urban Matter team had the honor to have Julia on an interview to talk about her unique background, experience, and passion for the food & beverage industry.

Q (Urban Matter): Tell us more about your background. Were you a Chicago local?

A (Julia Momose): I was actually born in Japan. I lived there until I was eighteen then moved to America. It was in New York first, then Baltimore, and now Chicago. So I’m more of a Chicago transplant — I moved here in 2013. So it has been a little while.

Q: As we know, Asian and American drinking cultures are slightly different from each other. How does the Japanese drinking culture, from your perspective, differs from that in the U.S., and how has that affected your pursuit in mixology?

A: When I was in Japan, I started working in the hospitality industry through high school. I was just mostly polishing glass and watching. My parents don’t drink at all so I wasn’t raised around [drinking] either. But, in Japan, [drinking] is very easy — the drinking culture is very soft and easy-going, in a sense where there isn’t a whole lot of intensive drinking. The bars are all separated out, so you’d go to a certain bar for a certain drinking experience. But in America it’s more… you go to a bar, and the bartender is expected to have everything. In Japan, there is an amazing non-alcoholic drinking culture as well that’s about getting together and less about the ABV of everything.

Q: So, when did you actually start creating your own drinks? When did you fall in love with cocktails?

A: Creating drinks really started when I moved to America. College was when I really started to bartend. But I fell in love with cocktails when I was traveling back home to Japan, when I would visit the bars there and just watch how the bartenders moved and worked — it was just the way they connect one motion into the next — it was so fluid. There’s something about the way you feel when you’re sitting at a bar like that. And that was the experience I wanted to bring to people when I was making drinks.

So I really started studying Japanese bartending techniques. It took time for me to fall in love with cocktails. Initially, it was just this fascination and obsession, but the small interactions with people along the way — not just the drink but the conversation also — that’s when I really fell in love with it.

Q: What is your personal best cocktail memory you’ve ever had as a guest enjoying cocktail?

A: It was the drink that made me decide I wanted to be a bartender. It was at a bar in Gyon, Kyoto. It was my first real cocktail bar experience and I was super nervous — didn’t know what to order. So I just asked for a martini however the bartender would make it because I didn’t know. And they made the most exquisite gin martini. It was the way the bartender moved and flowed so gracefully, and how he made me feel like an adult as well. That felt really amazing — that was my most memorable experience and one that has definitely influenced the way I bartend.

Q: The opposite of the previous question — what is that one terrible drink/liquor that made you swear you’ll never ever drink again?

Probably Goldschlager from college. It was a cinnamon liqueur with gold flakes in it. It was also really sweet — lots of sugar in it. So it’s horrible the next day. Just for hangovers in general, the sugar content is so bad. And shots in general — I don’t like to take shots because they get me way more intoxicated. So I’ll enjoy sipping on drinks but I tend to go more low proof or even spirit free. Also, Fireball comes right after Goldschlager.

Q: Why are you so passionate about spirit-frees?

A: Like I mentioned, my parents don’t drink alcohol, just by choice. And when I decided to become a bartender, it was very intense because of the fear that they won’t approve of [my decision]. Because of the Japanese culture, [having my parents’ approval] was a very big thing for me. So when I started really bartending and decided that I want to have my own bar one day, every program that I worked on, I developed a non-alcoholic program. At the time, people would call these drinks “mocktails.”

But at a grocery store during my visit to Japan, there was a huge non-alcoholic selection, and I saw this product from Suntory called “All Free” and I completely fell in love with that name, because it sounds so powerful. It is not like we’re giving anything up, but it’s a choice. It’s incredible because there’s 0 alcohol and completely calorie-free as well. It was really an alternative to beer or even a highball because it’s light and refreshing and I love the quality of it. All free, as in a mixed drink without spirit in it, so I wrote a manifesto saying we should call [these drink] “spirit-free”s.

So yea. I think having the opportunity to make drinks for people that don’t take the ABV into account, but rather it’s all about the flavor and feeling, and people coming to gather together around the drink, is incredible. All-free just came to America as well, actually. So now we use that product in drinks at Kumiko. That’s actually what I did in January (for dry January) and February as well. I think the key thing about spirit-frees is that people try it and they don’t even think about the alcohol — they don’t miss it. But if it’s someone who doesn’t drink alcohol at all, they are actually getting a very complex, unique drink.

Q: Tell us about your battle on getting cocktail delivery accepted. Why did you decide to do this? What was the biggest obstacle you faced?

A: For Chicago, all restaurants and bars indoors were shut down back in March. When that happened the governer put out an executive order saying the bars and restaurants that were normally on-premise were allowed to sell packaged goods. But those meant sealed bottles, meaning we couldn’t make cocktails and sell them. But the whole thing about a cocktail bar is that we take these ingredients, mix them together [and that’s where our value comes in]. We could compete with [liquor store prices]. So I reached out to some people, running an email thread where bars came together during that time, and I asked if anyone knew about [possibly delivering cocktails] and it was just total silence. No one knew.

Then, a liquor attorney reached out to me saying he believed in this and wanted to help. Next, one of my regulars who was a marketing genius reached out too. So there were the three of us working on how to change the law. I started off on Change.org with a petition, then made posts on social media to raise awareness that [cocktail delivery] is a thing we can do. At the time I wasn’t sure whether it was the city or the state who can change it because we were being tossed back and forth. At one point some mayors allowed cocktail deliveries, then the state came in and shut those activities down.

So we documented the activities being shut down after a press conference where the governor indicated [cocktail delivery] was a local issue and called the issue out. The next day I got a call from the Illionis Liquor Control Commissioner. Then we started having conversations [to really move things forward] while ensuring the cocktail delivery was done safely. Yea. Definitely couldn’t have done it alone.

Q: So, how does it feel to receive this year’s Pineapple Hospitality Award?

A: It’s a huge honor! But again, hospitality is not just about one person. It’s about everyone together — a team making the experience happen for people. Cocktails for hope is a combined effort of so many individuals, so I’m really honored to receive the award, but I also just really want to give it back out to the community — to everyone who made this happen.

I hoped this would bring positive energy. That is something about Kumiko — we do what we do for each other and for the people, and hopefully we have a really good time doing what we love and something we’re very good at, and if people love us as well, that’s awesome.  That way when an award comes, it’s almost like something to live up to. Like we’re gonna act like that. We’re gonna be that consistently. So in a way, I think awards are almost setting further goals for us. Like what’s next? How am I gonna live up to this? How can I continue to help my community?

A: Ideas, yes. But right now I’m still very much in survival mode. Reopening indoors — we reopened in August so it’s almost six months since then — we’re very short-staffed. I think my goal right now is to continue to work Kumiko into a place people want to be, want to stay, and feel happy. And I want to take care of the staff as well. Because the majority of people working in the industry are people who actually want to be in this world. So, I want to make sure I have a place where people feel safe working and making a fair wage — all those things are my top priorities. And within that, yes, I want to expand the menu and do really cool dinners based on Japanese spirits… But right now, we’re just trying to survive and do a good job.