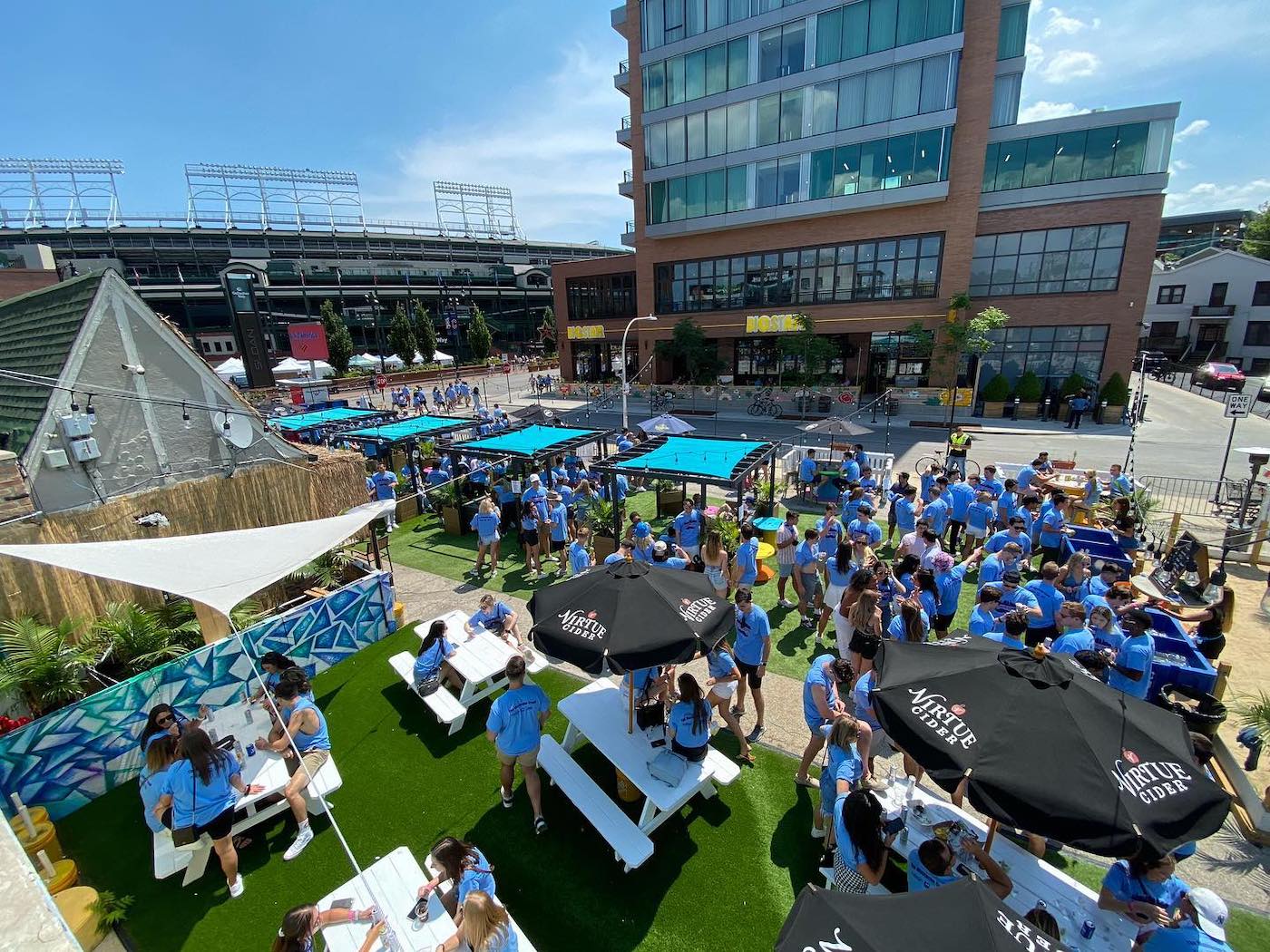 4 Spots Where You Should Watch the Crosstown Classic This Weekend

Yep, you’ve guessed it. It’s Crosstown Classic time! And it’s this weekend. And that means your favorite bars and restaurants are serving you the best foods and cocktails for the games. And I know you’re looking for the best spots in Chicago to watch it this weekend. So, look no further! This weekend, cheer on your favorite Chicago baseball teams at baseball hotspots, PB&J, Recess, Rizzo’s Bar & Inn, and Cork and Kerry’s!

This weekend only, sports fans can root for their favorite home team while sipping on a frozen blue cocktail slushy to support the Cubs and a frozen white cocktail slushie to support the White Sox. Are you a fan of both? PB&J can combine the two flavors to make a Blue and White frozen swirl. And if you’re wondering what’s in these special drinks, the White Sox Frozen Colada is made with Bacardi Rum, Pineapple Juice, and Cream of Coconut (Pina Colada) and the Cub’s Blue Frozen Cocktail features Smirnoff Blue Lemonade, Lemon Juice, Simple Syrup, and Blueberry Redbull!

Take a break and go to Recess to catch this year’s Crosstown Classic outside on Chicago’s largest outdoor patio. Televisions adorn the entire space within Recess, so whether you’re on the patio or inside their dining hall, you’ll never miss a pitch or the Seventh Inning Stretch. Mix your own margaritas on the brand-new Fender Blender bike between innings for perfectly blended spirits for your party, which serves up to six people.

If you’re looking to pay homage to the history of Wrigley Field and its neighborhood, there is no better place than Rizzo’s Bar & Inn! It’s the perfect blend of old school and new school. This unique space features a patio with a retractable roof and heated floors, three full-service bars, twenty-eight LED TV’s and one thirteen-foot LED screen, perfect for this weekend’s Crosstown Classic. Not only is it the ideal place to watch the Cubs, but it’s also a great place to indulge in some alcoholic beverages. No shame in that.

Rizzo’s features FIVE insane fishbowl-type drinks that are perfect if you’re watching the games with your squad. These five include Tito’s Mule, Hornito’s Blood Orange Margarita, White Claw Bucket, Domestic Bucket, and Ketel One Cucumber Mint Refresher. And if you’re hungry and have a huge appetite, Rizzo’s has you covered. Order the Giant Pretzel and you won’t be disappointed. Yes, yes you guessed it, it’s a GINORMOUS Pretzel Served with a Side of Nacho Cheese, Whole Grain Mustard, and Cinnamon Butter. We’re not being hyperbolic when we say it’s basically the size of Wrigley Field itself.

Cork & Kerry’s at the Park

Last but not least, if you’re a Sox fan, head over to Cork & Kerry’s at the Park. Cork & Kerry At The Park is a neighborhood tavern located in Bridgeport and is only a couple of blocks from Guaranteed Rate Field. Their welcoming turn-of-the-century tavern boasts a menu featuring a large beer and drinks selection, traditional Irish meals, plus plenty of today’s favorite Chicago dishes. Enjoy the games with their award-winning burgers paired with perfectly cooked tater tots. A MUST! Or, indulge in some of Chicago’s favorites like a baseball classic, Vienna hot dog, Italian Beef, or a Four-Cheese Grilled Cheese. And it doesn’t stop there. What’s a baseball game without beer right? Cork & Kerry’s proudly serves Goose Island beers, featuring the 312, 4 Star Pils, Green Line Pale Ale, Old Man Grumpy, and an IPA.