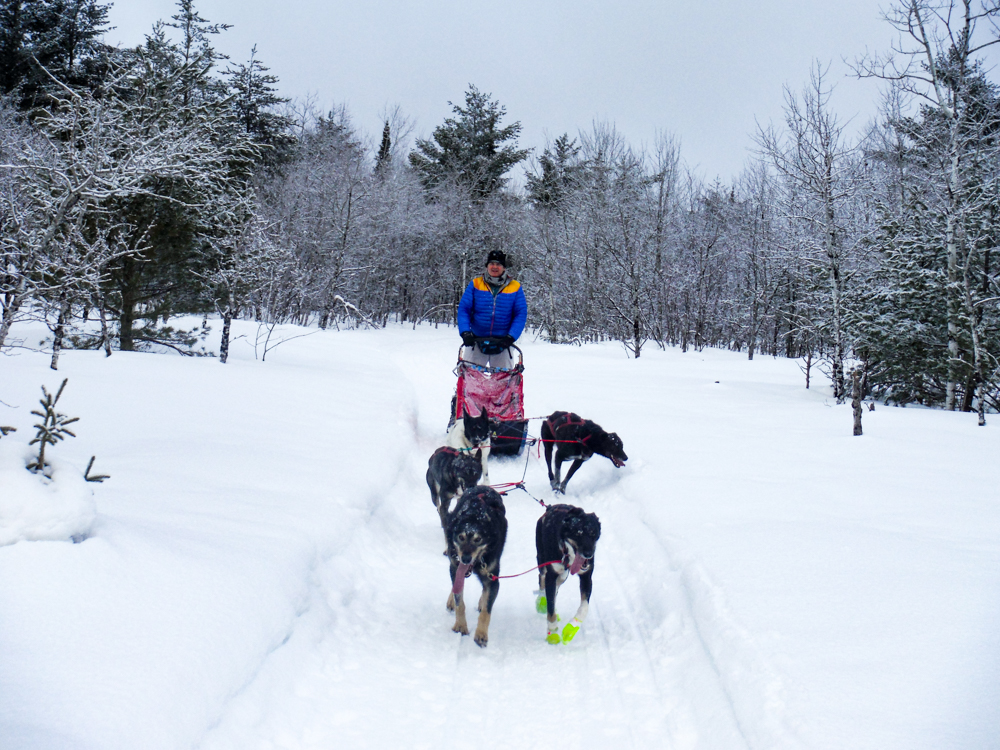 You Can Go Dog-Sledding in the Upper Peninsula, Just Under 7 Hours from Chicago

You do not have to fly to Nordic countries or Alaska to dogsled. You can do it right here in the Midwest.

When most people think of dog-sledding, they most likely conjure up images of the Nordic countries like Norway, Sweden, and Finland. If the opportunity does exist in the United States or North America, the first places you might think would be far northern, like Minnesota, Alaska, and Canada. One might not think that just across the Mackinaw Bridge in Michigan’s Upper Peninsula one can pursue dog-sledding with ease.

Getting to Nature’s Kennel

I was in Marquette, Michigan, to ski the Noquemanon Cross-country Ski Marathon. After a day of recovery, I drove to the eastern part of the Upper Peninsula to enjoy a ten-mile dog-sledding adventure with Nature’s Kennels. After an hour and a half drive from Marquette, Michigan, through some desolate and remote country, I came to a small crossroads in the village of McMillan, Michigan. I turned down an even more desolate and even more remote, wintry country road and found myself at Nature’s Kennels.

I introduced myself to owners Ed and Tasha Stielstra and met my guide Rachel. Temperatures were unseasonably warm. The high was in the low 30s. I dressed in several layers but did not feel I needed a snowmobile suit. I did change into some heavy boots that were provided by the kennel. After a cup of hot chocolate and conversation with the other guests in the main check-in room, it was time to meet the dogs.

Riding My own Dogsled

When I made arrangements for the outing, I assumed I would be a passenger in a sled with a musher behind me. To my surprise and delight, Nature’s Kennel set me up with my own team of five dogs behind another sled driven by my guide Rachel. Rachel explained the safety aspects of the tour and detailed how to control the sled. The most important aspect to know was how to slow the dogs and how to stop them.

The stopping and starting of the sled could not have been easier. To slow the dogs down, all you do is put your foot down on a square mat directly below your feet. Metal spikes under the mat dig into the snow when pressure is placed on the mat. This creates a drag slowing the dogs down. To stop the dogs, there is a metal bar in between where the musher stands. One just steps on the metal bar with one or both feet, which plunges the metal into the snow and effectively stops the dogs. There are two tethers that can be either tied to a tree or a spike that goes into the snow to anchor the dogs once stopped, but this is done by your guide.

If you love dogs, then you will enjoy putting the harnesses on the dogs and then attaching the harness to the sled. These harnesses are sturdier than those you might use for smaller breeds like French bulldogs, but have the same goal of protecting the dog’s delicate throat. First, you put their head and front legs through the harness while they are still attached to their chain. Then you walk them over to the sled by holding the top of their harness. All the dogs were super friendly. The only problem is some are so feisty and strong that they were difficult to manage. Others are completely docile and actually lifted their legs up to help place them into the harness.

Once the harnesses are attached to the sled it was time to go. The dogs were barking and chomping at the harness to go. It was so exciting. Rachel took off in the sled before me, an employee of Nature’s Kennel assisted me in pulling the tether loose to unleash my dogs, and we were in motion. I am not sure who was more excited to take off, me or the dogs.

Five dogs were leading me through the Michigan wilderness. Reilly and Harold were up front. Han was by himself in the middle and Fetch and Jordan were in the back closest to me. There was an empty red canvas car on the actual sled in front of me that could be used to carry goods or a passenger. Then there was a wooden bar to hold on to just above waist level and two bars on each side to stand on.

Over the river and through the woods with Nature’s Kennels

The trails were similar to snowmobile trails in size and nature. There was just enough room for the dogs to pass and the sled to pass with a little to spare on both sides. The woods were gorgeous with snow-covered pines and hardwood trees. There were over two feet of pure white snow on the ground. A light snow was falling as we cruised through the forest. It was magical.

The terrain was rolling. It was not too rugged, but there were some ups and downs. At times going downhill, it was necessary to step on the square mat to slow the dogs before they ran into Rachel’s team. There were also a few turns, which were easy to manipulate. The dogs know the route as they are following the sled in front, but it sometimes is necessary to lean into the turn and move the sled handles into the curve. Other than that, the steering took care of itself.

As I mentioned, two days earlier, I skied for seven hours in the Noquemanon Ski Marathon. It was so nice to speed through the woods standing up and just taking the scenery and the excitement of the dogs in. We traveled roughly two hours through the UP wilderness before returning back to the kennel. We did stop once and let the dogs rest and took a few pictures before resuming.

We returned to the kennels, unharnessed the dogs and then headed for the reception lodge for hot chocolate, coffee, cookies, and brownies. They were delicious after a brisk run with the dogs. Many thanks for Nature’s Kennel and Travel Marquette for hosting me.

Besides having one-day dogsledding adventures, Nature’s Kennel also offers overnight experiences. Check their website for more information and rates. If you want to check off a cool bucket list adventure, you do not have to fly to Finland, you can just drive seven hours north to the UP.

Disclosure: The author did receive a complimentary tour from Travel Marquette; however, it did not influence my reflection of my experience with Nature’s Kennel. All thoughts and opinions expressed herein are my own