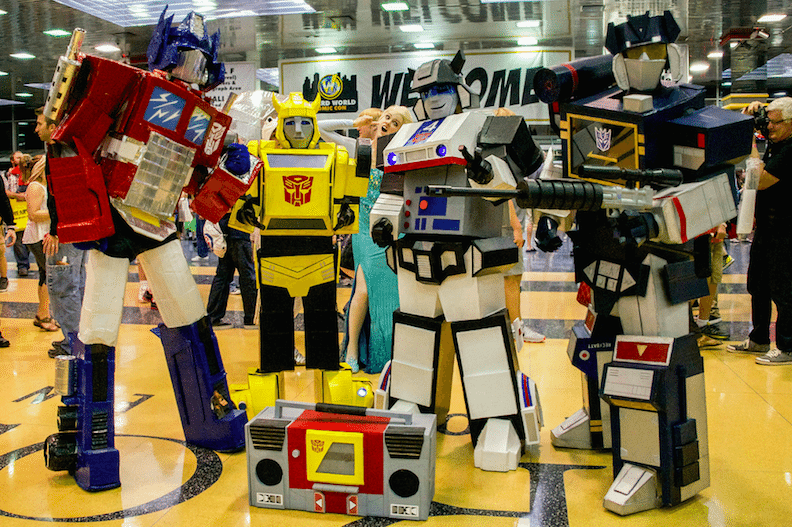 The Wizard World Comic Convention, often known as the Chicago Comicon, took the city by storm this weekend, bringing in star power from every corner of Geekdom. Celebrity power spanned the Marvel and DC universes from movies to TV shows, all based on staple comic book characters known and beloved by comics fans for decades.

Jeremy Renner, known for his roles as Hawkeye in the Avengers film franchise as well as roles in both the Mission: Impossible and Bourne franchises, was in attendance and delighted fans during a panel discussion. “Hawkeye is a real person, with a real skill, and I can understand that, understand him,” commented Renner. He also added some fun insights into the antics of fellow Avengers Chris Evans and Robert Downey Jr. on the set of the Avengers films.

Ben McKenzie, of The O.C., Southland, and most recently as Jim Gordon on Fox’s acclaimed Gotham series was nearly as excited as his fans this weekend. Speaking in advance of next month’s Gotham premiere, “Season Two is going to be amazing! We have Mr. Freeze, we have Firefly…should I be saying this?”

“We listened to fans. This isn’t a police proceedural. We won’t catch a villain each episode.” Also sharing insight into the marital side of the Gordon household, “Jim & Barbara’s relationship may not play out like it did in the canon,” McKenzie added, “we want the audience guessing.”

Cult classics abounded, as Sean Patrick Flanery of Boondock Saints fame came through with a big reveal that, “the third movie is called Legion! And it’s in the works!” to a raucous crowd eager for more of the cult film series.

Nathan Fillion is forever known as Firefly’s Captain Mal Reynolds, and more recently as ABC’s Castle and the voice of Green Lantern in DC’s animated universe. This weekend during a panel at Wizard World he shared the comic book hero role he’d like to play: Booster Gold.

Jodie Sweetin from the classic 90s sitcom Full House signed autographs and posed for photos with adoring fans of all ages. Sweetin also shared an adorable insight about her own love of the original TV show theme.

Jason David Frank, the original Green Ranger from the Power Rangers TV show, documented his trip and appearance in Chicago via his Twitter and Facebook accounts, including this classic gem proving the man can still rock the duds. Frank is notoriously generous with his time for fans and great causes while showing he still knows how to have a great time when he’s in town!

Other recognizable names among the top-billed celebrities in attendance were:

And an impressive lineup of far more.

True to community form, Wizard World also showed the love to independent comics and creators with a great Artist Alley section devoted just to them.

Here is the Costume Contest winners official post on Instagram by Wizard World. Our vote for most unusual and entertaining cosplay costume: The Infinity Gauntlet. The Daily Herald put together a nice roundup of some of the cosplay costumes in attendance at this year’s convention here.

A Chicago staple since 1972, this year’s Wizard World did not disappoint. Fans raved all weekend long and filled social media with praise for a comic con done right!