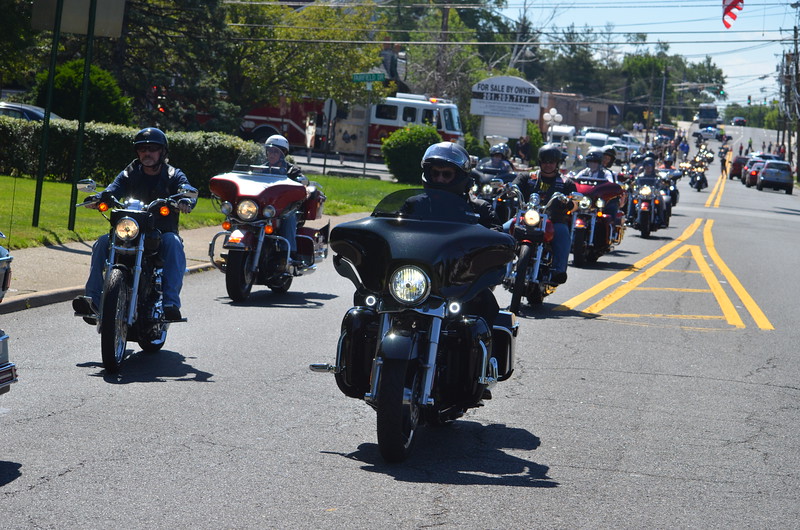 Veteran Tom (T-Love) Efron knows what it means to sacrifice and not have anyone notice. He’s determined that the New York police officers who gave their lives in the line of duty will never be forgotten.

A veteran is a person who wrote a blank check to the United States that could be cashed up to and including the “Ultimate Sacrifice.” But don’t ever make the mistake of thinking that when those uniforms are hung away in the “Posterity Closet” that these men and women believe their duty is over.

Couple that with the false perception of large numbers of motorcyclists making people nervous and thinking of Marlon Brando in “The Wild One.” Nothing could be further from the truth. These are not the so-called One Percenters, the Hells Angels and others of their ilk. These are men and women who simply enjoy riding and giving back to the community.

Today that check is still being written on a regular basis, as exemplified by New York City’s Tri-Boro Chapter of the Nam Knights Motorcycle Club.

On a recent chilly and windy Sunday morning, some 30 members of the Nam Knights, along with members of the American Legion’s Legion Riders, Special Forces Motorcycle Club and representatives of law enforcement-oriented motorcycle clubs, gathered on a side road just off the Cross-Bronx Expressway.

The convocation was there to honor fallen New York City police officers killed in the line of duty.

The first meeting was held in 2006 to pay homage to two Bronx police officers, Det. Daniel Enchautegui and Eric Hernandez, who were murdered while on the job. Enchautegui was killed while trying to stop a burglary. Hernandez was slain attempting to break up a fight at a fast-food restaurant.

Today the event has expanded to include the hundreds of fallen police officers from New York City.

Combating the chilly weather, the riders and some passengers downed cups of coffee and washed down sweets to fortify themselves for the ride.

T-Love Efron, Tri-Boro Nam Knights Chapter president, made a point of welcoming each rider as the participants trickled in and prepared for the 11 a.m. KSU (rider jargon for “Kick Stands Up”).

Each rider paid an entry fee of $20 and a couple of dollars extra if there was a passenger on the motorcycle. Opening ceremonies included the awarding of trophies for the riders who had traveled the greatest distance (won for the second time by a New Jersey contingent), cleanest bike trophy taken home by a former police detective, oldest motorcycle participating (won for the second time by a Garden Stater) and several more for motorcycle-oriented accomplishments.

Drivers in passing cars blew their horns and waved in support of the riders.

As the time for KSU approached, the riders mounted their motorcycles and revved them up. The roar of the combined engines drowned out the noise of passing traffic on the highway but, as someone mentioned, “Never fails to give me chills.”

T-Love walked up and down the line reminding the riders of the safety rules for the ride. “Keep your distance, don’t cut in, stay in line.” His mantra was that of a perfect safety record since the first ride in 2006 should be kept intact.

Most of the riders had layered their clothes worn under leather vests, each bearing the emblem of their various clubs. Some of those layers would later be peeled off as the temperature rose.

T-Love took the lead position and pulled into a tight U-turn to head for the highway entrance. Flying high from the back of his motorcycle was a massive American flag. Most of the other bikes had smaller American and POW flags flying from the rear of their rides.

The colorful procession rolled out and onto the right-hand lane of the highway, carefully following the speed limit. Heading west, they drew smiles, applause, and waves from scores of passing cars. Young children sat in the rear of cars with their noses pressed tightly to the window, watching in awe as the bikers rolled on.

Miles down the road, the procession wove its way down an exit ramp and onto the West Side Highway, running along the Hudson River. Near the Liberty Street exit across from the hallowed grounds of Ground Zero, T-Love pulled off and into the upscale high-rise development of Battery Park City.

The riders parked their motorcycles in a line with the rears touching the curb, dismounted, and headed for a black wall memorial. This solemn structure held the names of every police officer in New York who had died in the line of duty since 1908. At the lower right-hand corner was an ominously large blank space that no one hoped would ever be filled with additional names.

While one of the Nam Knights prospectives (a potential member) stood guard over the parked bikes, the remainder of the participants carried a floral offering in the shape of a flag and in the green and white colors of the NYPD.

T-Love asked a member of the Legion Riders, a police motorcycle club, and two members of the Special Forces Motorcycle Club to do the honors and present the offering.

Following a prayer for the fallen and hopes of safety for the living, many of the riders gathered around the floral piece for a photograph. Speeches were few and to the point.

After the ceremony, the riders once again mounted up, heading north on the West Side Highway to 125th Street and a repast at the iconic Dinosaur Bar-B-Que, the traditional stop following the event.

The Nam Knights were first formed in 1989 by Jack Quigley, a New Jersey Undersheriff who served in Vietnam as a Marine. Today there are 69 chapters in 16 states, Washington, DC, and even Canada.

For information on the Nam Knights Tri-Boro Chapter, contact T-Love at Tlove6969@aol.com.