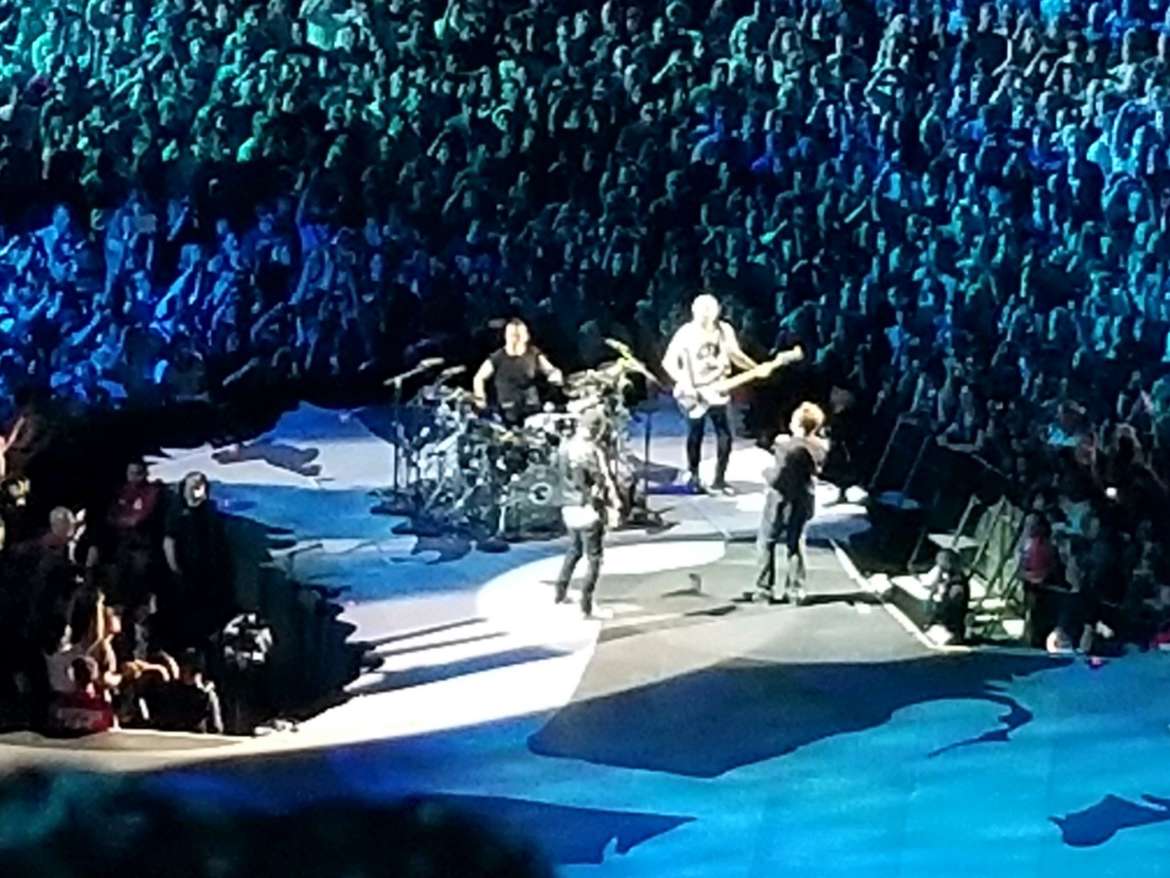 U2 Delivers Stellar Chicago Performance On ‘The Joshua Tree’ Tour

In their Chicago performance at Soldier Field, Irish rockers U2 demonstrated that they’re still a powerful unit. The two-hour concert was not only a journey through time that chronicled the band’s entire career, it was also a cultural experience that contained political speeches and the identification of social issues and possible solutions.

As the sun was setting, opening act The Lumineers warmed up the crowd with a one-hour set of their blend of American folk and alternative rock, which included their hits “Hey Ho,” “Ophelia,” and “Cleopatra.” Long after The Lumineers finished as the crowd waited for U2, the headline act made an unexpected appearance. Rather than emerging in the spotlight minutes after the stadium lights dim and the crowd cheers (as most acts of such status do), U2 had a much more intimate idea in mind.

While the house music played in between sets and before the stadium lights were dimmed, U2 drummer Larry Mullen Jr. made his way across the main stage and walked down a thin catwalk to the mini-stage where a second drum set was waiting. There was no spotlight on Mullen, so only a small portion of the audience noticed and cheered as he took his throne. The instant the song playing over the loud speakers finished, Mullen began the thundering opening drum beat to “Sunday Bloody Sunday” and the show began.

As Mullen was jamming, guitarist The Edge appeared and began playing the piercing riff of this 1983 classic as he walked to join Mullen on the mini-stage. Shortly after, lead vocalist Bono and bassist Adam Clayton arrived and the circle of all four members, who’ve been together since 1976, was complete.

U2 continued the first chunk of the show on the mini-stage with a handful of classic hits, including “New Year’s Day,” also from 1983’s War, and “Pride (In the Name of Love)” from 1984’s The Unforgettable Fire. After the rest of the band stopped playing, Bono continued to lead the crowd in chanting the chorus of “Pride (In the Name of Love),” which was eventually recessed by the opening noises of “Where the Streets Have No Name.”

As these haunting electronic sounds were heard, the group walked back down the catwalk to main stage, in front of a giant Joshua Tree backdrop. The group of four approached each other and, for a few moments, stood completely still and posed in a similar position as they were in on the album cover of 1987’s The Joshua Tree. Then, The Edge broke the stillness and walked to the front of the stage as he began the opening riff of this track. In celebration of its 30th anniversary, The Joshua Tree (1987) album was performed in its entirety.

Even though the concert (and the entire 2017 U2 tour, for that matter) is focused around the anniversary of this classic album, U2 addressed many contemporary issues and included a few new songs in their set. This made the show feel not only like a look back on the past, but also a look forward to the future and perhaps even a lesson on how to improve it.

In between songs, a controversial video addressing social issues was played, and U2 showed no signs of cutting down on the political commentary. At one point in the night, Bono mentioned that his One Campaign to end world poverty is 8 million strong and, in an effort to get more fans to join, stated that the government fears nothing more than organized people. Bono also delivered a powerful speech about the importance of respecting women, focusing on why women deserve equal access to education.

After The Joshua Tree set was completed with a chilling performance of “Mothers of the Disappeared,” the stadium lights didn’t come back on and the crowd didn’t stop cheering. Eventually, U2 returned to the stage for an encore set that included the staple “One” from the 1991 album Achtung Baby. After three encore songs, Bono said that he “didn’t feel like leaving yet” and the band literally went into a huddle, similarly to that of a little league baseball team.

The crowd cheered and wondered as the group of four had their private discussion, which resulted with strong performances of “Beautiful Day” and “Elevation” from the 2000 album All That You Can’t Leave Behind. At one point in between songs during the encore, Bono led the crowd in an interesting a cappella sing-along version of “Three Little Birds” by Bob Marley and the Wailers. The band concluded the show where they began, on the intimate mini-stage, with a new song that’s due on their upcoming album. The band performed this final number with all four members crowded around Larry Mullen’s drum kit, reminding the audience of how special it is to witness a band with members that haven’t changed in over 40 years.

U2 delivered a truly stellar performance of their hits in chronological order with a look at their perspective on many of the world’s issues. A chance to see this era-defining act should not be missed.