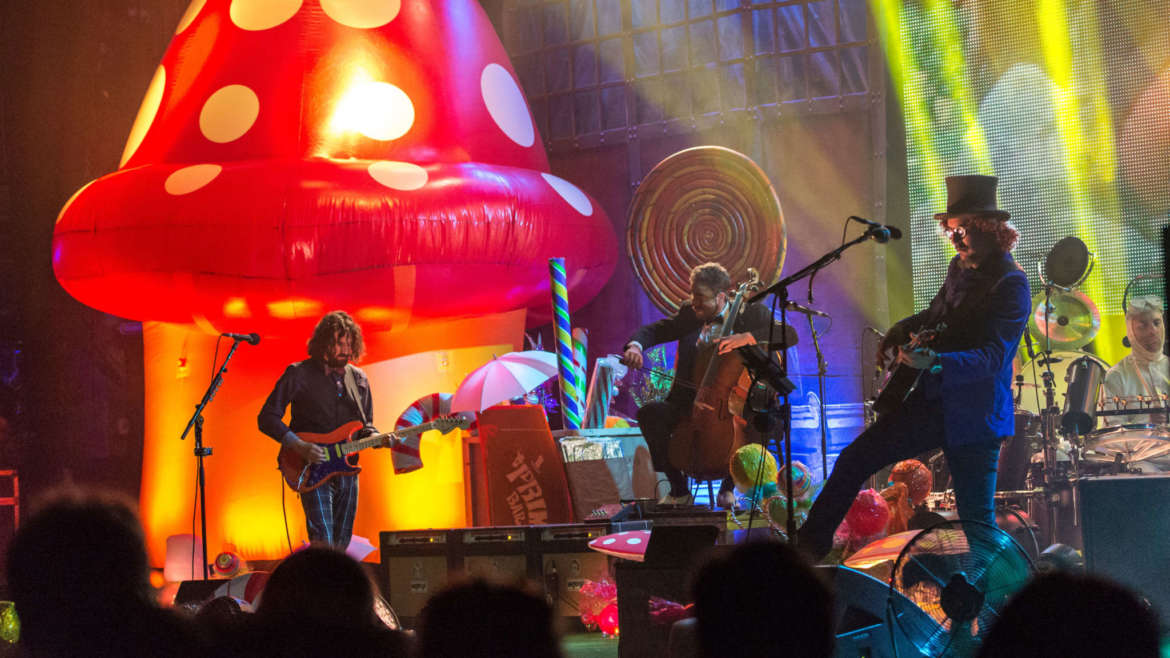 Anyway, we’ve compiled a list of the Top 10 Shows for April, and without giving away any spoilers, we’re excited to check out quite a few of them. As always, buy tickets for shows as far in advance as you can to make sure they don’t sell out before you pull the trigger.

In the past Stevens’ work has been elaborately synthesized and orchestrated. This time around, the ambitious musician took a different approach, using a minimalist philosophy for Carrie and Lowell, a record named after his parents. Stevens is obviously touring for his newest album, but fans will remember his previous release Illinois, which is uses both the state and city of Chicago as a theme. This almost certainly means he’ll play good amount of his past tunes when he visits near the end of the month.

8) Death Cab For Cutie
At The Chicago Theatre
April 30th – May 1st
Death Cab is finally back with their first release since 2011. The trio’s newest album, Kitsugi, just hit the shelves at the end of March, and frontman Ben Gibbard supposedly drew inspiration from his divorce with Zooey Deschanel (juicy, I know). The album mainly focuses on what it’s like to be a celebrity and the emotional and mental impact that it has on a person. The show is also at the Chicago Theatre, one of the most iconic venues in the city.

7) Daily Show Writers Standup Tour
At Lincoln Hall
April 18
All front men need to be witty, but they need great writers too. Such is the case with John Stewart and the Daily Show writers, and the latter group is now taking the stage to show just how funny they really are in person too. The humor will be based around politics, but unlike the show, there will be a Q&A session at the end. Any aspiring writer or comedian should consider this a must-see.

6) Joe Bonamassa
At The Chicago Theatre
April 16th – April 17th
Joe Bonamassa has released 15 albums in the past 13 years and plays around 200 shows worldwide annually… let that sink in for a moment. The man lives and breathes music on a daily basis, and it’s obvious that he’s among the hardest working musicians today, if not ever. The legendary blues guitarist is sure to fire up the crowd in Chicago this month with his trademarked passion, finesse, and raw talent. Check him out at the Chicago Theatre while he’s in town. You won’t be disappointed.

5) Chicago Improv Festival
Various Venues
April 20th – April 26th
I’m going to start by admitting I’m cheating a bit here by including the entire festival (it’s actually a collection of shows). There, I said it. The Chicago Improv Festival takes place in 14 venues across Chicago, including the famed Second City. The fest will have acts from 10 different countries around the world, and if you like to laugh (newsflash, everyone does) you’ll have to catch at least one show.

4) Neil Diamond
At The United Center
April 14
The 74 year-old Neil Diamond is embarking on a 74-stop World Tour! The Sweet Caroline singer just released his 32nd (that’s not a typo) studio album, Melody Road, and according to Billboard, it’s “rich in orchestration that retains the dark rustic qualities of his last two studio albums of original material.” The concert is going to be huge, as both new and old (don’t worry, if you can use the internet you’re not that old) fans will be taking part. Scoop up some tickets while you still can.

3) The Book of Mormon
At The Bank of America Theatre
Now Playing – May 17th
Under normal circumstances, I would bump this one up to the top of the list, but since it’s been around for a while now, I figured I’d let a couple others share the limelight. This Tony Award-winning musical is completely and utterly hilarious. The musical follows the story of two Mormons who set out to convert African villagers to their religion. Without giving away any of the plot, let’s just say that it’s well-written. Oh, and there’s a character named General Butt-(Censored) Naked… yeah, seriously. If you want more info, check out our blog post on why you’ll love this play no matter what.

2) The Joffrey Ballet – New Works
At The Cadillac Palace Theatre
April 22nd – May 3rd
The Joffrey Ballet commonly performs both classical ballets and more modern dance renditions. The New Works show includes three different performances: Liturgy, Evenfall, and Incantations. The three could not be any different, and that’s what makes the show so appealing. Liturgy comes equipped with a “haunting score” and features innovative partnering. Evenfall embraces the autumn seasonal approach, and Incantations is an abstract work of continuous movement.

1) Hannibal Buress
At The Chicago Theatre
April 9th
Nowadays, it seems like everyone knows Buress for calling out Bill Cosby on stage, but the comedian has also put out two stand-up albums, starred in two TV show’s on Comedy Central (with a third on it’s way), and participated in the Roast of Justin Beiber. It was also recently announced that Buress would host the 2015 Webby awards, which are given out for “Excellence on the Internet.” Why did I give you all this background info? Because the man is just plain funny, and if you haven’t heard of him yet, you will. His future shows will probably cost way more than this, as he’s still considered an up and coming act to a degree, so catch him now while you can.