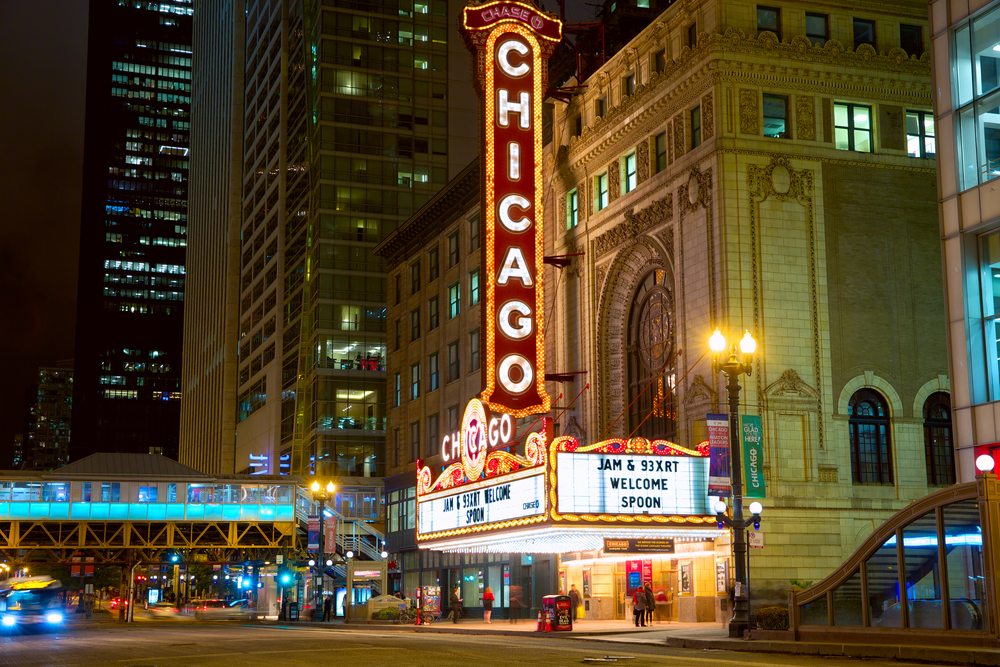 The Must-See Shows Coming to The Chicago Theatre

Trust us, these are shows you won’t want to miss

The Chicago Theatre is hosting some first-rate entertainment in 2017. From comedy to space talks to music to intimate discussions, this season at the venue has it all.

The Grammy Award-winning 12-piece band performs tunes from their recent critically acclaimed album, Let Me Get By. Tickets range from $19.50 – $109.50.

John Cleese and the Holy Grail

The legendary British actor and comedian comes to Chicago to resurrect tales from the making of the classic film Monty Python and the Holy Grail. Tickets range from $65 – $85.

The hit stand-up comedian, known for his Netflix special Bare and FX series Legit, is coming to Chicago and bringing his raunchy jokes with him for two back-to-back shows. Tickets range from $39.50 – $49.50.

Dancing with the Stars

The cast from the hit ABC ballroom dancing show come to perform original, jaw-dropping numbers as part of their nationwide tour. Tickets range from $55 – $75.

The film and TV star known for his role on Star Trek comes to Chicago to share behind-the-scene stories and a movie screening. Tickets range from $65 – $85.

A family adventure based on the popular children’s TV series offers an interactive show with meet and greet opportunities. Tickets range from $25 – $125.

This favorite standup comedian from Comedy Central comes to Chicago with an all-new special. Tickets range from $32.50 – $59.50.

Celebration of the 70’s Tour

It’s a blast from the past with The Stylistics, The Emotions, The Blue Notes, The Floaters, and Heatwave! joining forces to perform live. Tickets range from $60 – $90.

The Christian music singer joins special guest Leeland to visit Chicago as part of The Garden Tour. Tickets range from $26 – $43.

The Soviet Union-born New Yorker comes to Chicago to perform her pop, jazz, and blues-influenced tunes as part of her North American tour. Tickets range from $36.50 – $81.50.

An ode to the legendary rock and blues guitarist showcases a lineup of musicians playing renditions of Hendrix classics. Tickets range from $41.50 – $101.50.

The iconic “Queen of Soul” was scheduled last month to perform but had to reschedule due to bad weather, so don’t miss this second chance to see her live. Tickets range from $49.50 – $149.50.

The multiple award-winning actor and comedian from favorites like When Harry Met Sally, City Slickers, and Monsters Inc. hits the stage to deliver fun stand-up and intimate stories. Tickets range from $39.50 – $150.

The comedian known for performing the first live broadcast of a Comedy Central standup special visits Chicago with plenty of laughs. Tickets range from $45 – $62.50.

This standup comedian and writer known for her Netflix specials and Comedy Central appearances shares new material in Chicago. Tickets range from $39.50 – $65.

Move – Beyond: Live on Tour

The award-winning sibling phenomenon known for their casting on Dancing with the Stars returns with their sold-out tour featuring incredible choreography. Tickets range from $29.50 – $89.50.

The outspoken comedian and playwright comes to Chicago to entertain with his boisterous, standup style. Tickets range from $39.50 – $75.

The well-known model and feminist activist puts on an interactive show to deliver her liberating messages during the “wildest pajama party of your life.” Attendees must be 18 and over for entry. Tickets range from $43.50 – $63.50.

This astrophysicist and pop culture icon is bringing his knowledge of the universe to the Chicago stage in conjunction with the release of his book, “Astrophysics for People in a Hurry.” Tickets range from $49.50 – $250.

The folksy rock and soul artist celebrates her Day Breaks album with two kickoff shows in Chicago. Tickets range from $51.50 – $71.50.

The instrumental duo brings sounds from their album, Score, that touch on every musical genre. Tickets range from $38.50 – $54.50.