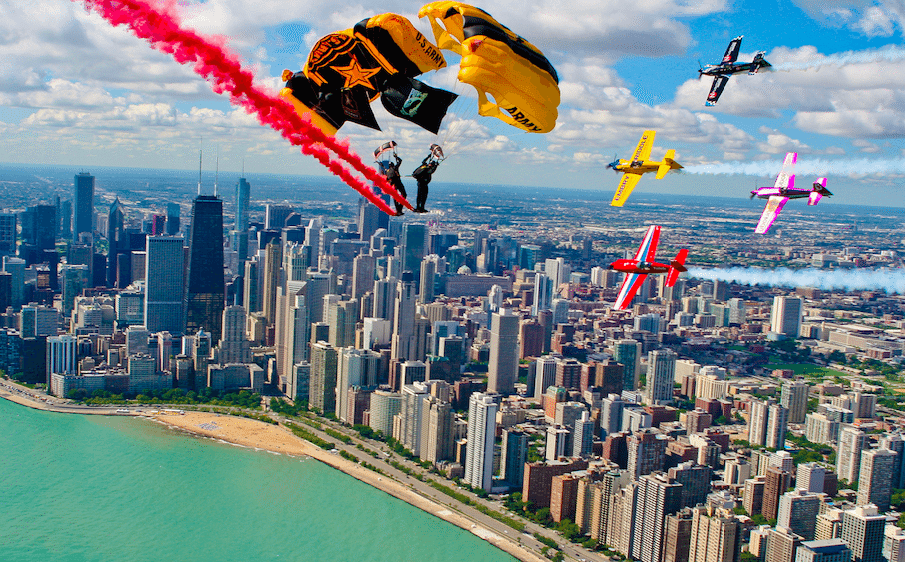 Taking Flight With the Chicago Air and Water Show

The Chicago Air and Water Show is the largest free show of its kind in the United States. The show can be seen all the way from Oak Street to Fullerton, with North Avenue Beach as the focal point. We’ve put together all you’ll need to know so you don’t have to wing it.

Not only is that the sound of that last pun going over some people’s heads, it’s also the noise you’ll be hearing quite a bit of as fighter planes zip by you along the lakefront. Here are some things to know up front:

The big headliner each year is always the Blue Angels, so we’ll start with them:

The U.S. Navy Blue Angels have been astounding audiences since 1946. This elite group of Navy pilots has set the standard for precision flying with their diamond formation, choreographed high altitude maneuvers, and astounding solo pilot aerobatics.

The U.S. Army Parachute Team Golden Knights have thrilled spectators in all 50 states and 48 countries since their commencement over 50 years ago. While some would be happy enough with a single (or non-existent) jump out of an aircraft 12,500 feet above the earth’s surface, these folks live for it.

The U.S. Navy Parachute Team Leap Frogs are also the type to jump out of planes, but with a twist. Accelerating to speeds of up to 180 mph, the Leap Frogs will then open their pilot chute and fly together to form various canopy formations.

The program is the same both days, but there’s no set schedule for performers (You can count on the Blue Angels performing last each time though). The pilots decide on a schedule the day of the event, so there’s really no way to know what will happen until then.

There are 21 teams performing this time around. They are as follows:

Voice of the Show

If you’ve been to the Air & Water Show, you’ve heard Herb Hunter. The esteemed announcer has been the official voice of the show for 30 years now, and for good reason. Herb possesses the quintessential ability to not only provide information, but also entertainment. He’s basically a household name at this point, so much so that we’ve dedicated a portion of this article entirely to him. Trust us, he’s good.

That just about covers it. If we’ve left anything up in the air (aside from the planes) let us know on Twitter @UMatterChicago or on Facebook at Facebook.com/urbanmatterchicago.