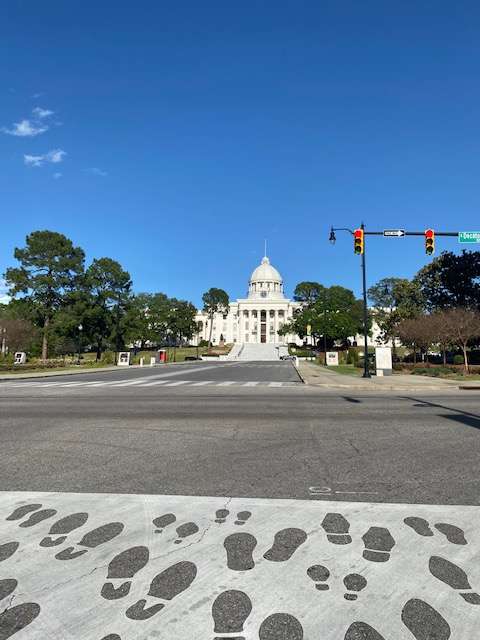 It’s one thing to learn about history in school or from books and another to actually experience the stories for yourself.

For an authentic experience about U.S. Civil Rights History, plan a trip to Alabama and see where it happened and what resulted.

Follow the Civil Rights Trail in Alabama to experience a piece of American history that may be difficult to fathom. What I learned from this dark story was hard to understand. But it also inspired me when I saw that the U.S. citizens who were treated so poorly finally fought back and earned their equal rights.

Alabama played a pivotal part in the Civil Rights Movement as many of the events happened there. Although slavery had been abolished, in its place were Jim Crow laws that discriminated in housing, education, voting, employment and medical care. Through it all, you’ll feel the influence of Rev. Martin Luther King Jr., listening to his speeches and embracing his leadership of non-violence.

Follow along through these destinations that created an unforgettable emotional connection to the universal struggle for freedom and true democracy.

Birmingham – Sobering and Reflective
My journey began in Birmingham, also referred to as “Bombing-ham” or “Dynamite Hill” because there were so many explosions that tried to squash the movement. Perhaps the 16th Street Baptist Church was among the most moving of sites. This church served as the headquarters for Rev. Fred Shuttlesworth to organize the campaign and a refuge for the community.

On September 15, 1963, the Ku Klux Klan planted 19 sticks of dynamite that exploded, killing four young girls and injuring many others. To quote a song, “In the room where it happened,” we saw where the bombing took place. We learned about the aftermath of this senseless tragedy from Lisa McNair, sister of Denise McNair, who died in the bombing, and talked about her new book, “Dear Denise: Letters to the Sister I Never Knew.”

Across the street, Kelly Ingram Park was the site of many civil rights rallies and demonstrations. Stand in front of these meaningful sculptures and come away with an understanding of the story.

Montgomery – The Boycott that Shut Down the Bus Company

Early on in the Civil Rights Movement, Rosa Parks stood up to the Jim Crow Laws and refused to give her seat up on the bus for a white man. This led to the Montgomery Bus Boycott in 1955, which shut down the bus system for over a year as African Americans chose to walk to work or share rides. It resulted in the end of racial segregation on buses and other mass transportation. I was fascinated with the Rosa Parks Museum on the Troy University campus, which tells Rosa’s story through interactive technology and a bus that recreates the entire event. It showcased how one person CAN make a difference!

Just as powerful is the Equal Justice Legacy Museum: From Enslavement to Mass Incarceration, which is located in a former cotton warehouse where African-Americans were enslaved. It uses interactive media, sculpture, cutting-edge technology and exhibits to tell the story. To me, the most moving testimonies were the recorded jail conversations I heard from incarcerated people who were either wrongly condemned, unfairly sentenced, or treated unjustly in the American legal system.

It was a thrill to stand in the pulpit of Dr. King at the Dexter Avenue King Memorial Baptist Church, where he served as Senior Pastor. The church was designated as a National Historic Landmark in 1974 because of its importance in the civil rights movement.

The Freedom Rides Museum is located on the site of the Montgomery Greyhound Bus Station. Follow the story of their journey through the South where riders were violently attacked in the 1961 Freedom Ride during the Civil Rights Movement.

As I walked across this bridge, I was following in the steps of history. On March 7, 1965, a brave group of 600 young foot soldiers attempted to find their way to the state capital in Montgomery to support voting rights. Police on horseback with clubs beat them back, known forever as “Bloody Sunday.” It took two more tries and five days to complete the 54-mile march to Montgomery, led by Rev. Martin Luther King Jr. and John Lewis. But in August, the National Voting Rights Act passed, and they knew their voices had been heard. How fitting that my walk took place on the very same day Ketanji Brown Jackson was confirmed as the first African American woman to sit on the U.S. Supreme Court!

On March 25, 1931, nine young black men were wrongfully accused of raping two white women while traveling on a freight train in Alabama. They were apprehended, convicted and sentenced to death. Following a series of retrials and convictions, the Scottsboro Boys collectively served more than 100 years in prison. Their legal battles entailed some of the most infamous racial injustices and inspired the civil rights movement. You can visit the Scottsboro Museum and learn more about this rush to injustice.

See a performance of the classic American novel, “To Kill a Mockingbird,” which takes place in Monroeville every April and May. Author Harper Lee grew up in Monroeville,  and the story was based on an actual event and trial. The Monroeville Courthouse served as the prototype for the eventual movie set. I watched Act One of the novel on the lawn, with Act Two upstairs in the Courtroom. I got to sit in the Grand Jury Box, making me feel like I was actually an actor in the play. Throughout the year, the County Courthouse is open for tours of the most famous courtroom in America.