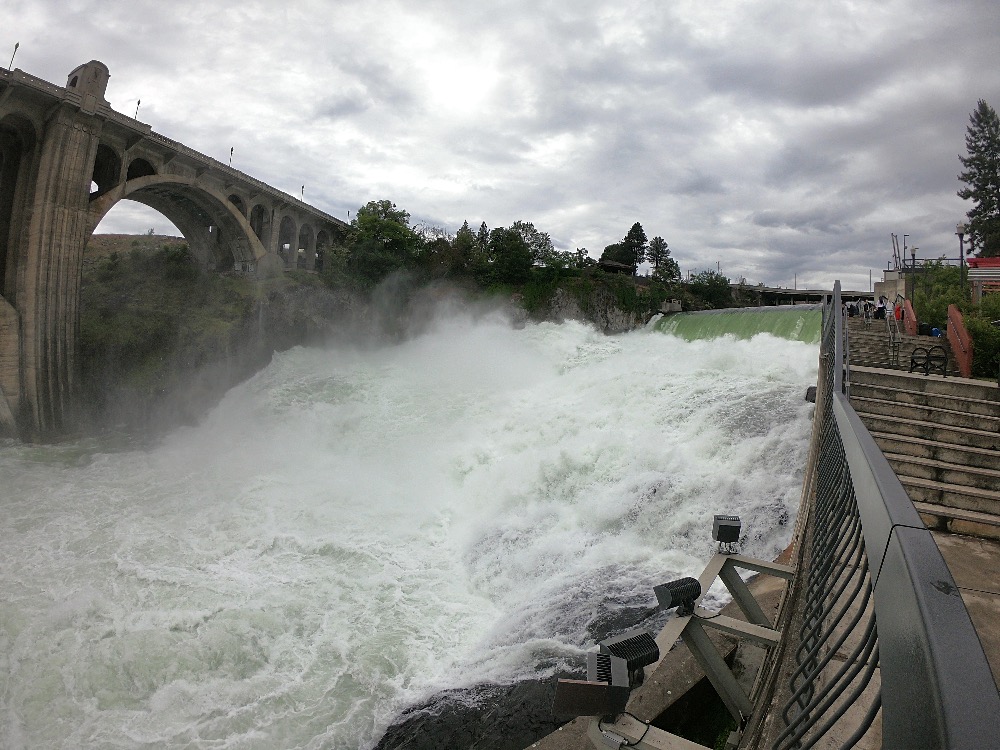 Spokane: A Perfect Blend of Urban and Natural

Seattle, Washington is known for urban adventure and is famous for being in the shadow of Mt. Ranier. Likewise, other cities in the Pacific Northwest sit in the tourist shade of Seattle, and it’s not the only city in the Evergreen state noted for its exceptional blend of urban and natural. After three days spent in Spokane, Washington, I came away impressed with the vibrant scene.

You do not have to venture far from downtown for the scenic natural beauty to begin. The beautiful Spokane River splits the city in half and the amazing Spokane Falls thunders beneath condos, malls, businesses, hotels, bars, and bistros. I walked from my hotel room at the Historic Davenport and in two blocks plus a short walk through the River Park Square Mall, and I was in view of a gorgeous waterfall—two actually.

There are two sections of the waters. The first is the Upper Falls, which flows through a massive gorge before spilling over to the Lower Section, which fuels hydroelectric turbines generating power for the region. All of this action is visible from parks, bridges, overlooks, and bike trails.

Below the Falls, the Outdoor Adventure Begins

Riverfront Park is the beginning of the Centennial Trail. This paved bike path follows the Spokane River all the way to the Idaho border and then onward to Coeur D’Alene. This is a distance of 66 miles, but I only needed a few miles of this trail to jog out of town. It took less than a mile for the grocery stores and restaurants to recede into pine trees and parks while ospreys flew and nested overhead.

Our rafting guide, Clayton with Wiley Waters, posed the question of how many urban areas have class III whitewater flowing practically through downtown. The answer is Spokane, and I was stumped beyond that. Below the falls is where we pulled in and rafted eight thrilling miles through two class III whitewater rapids. For those unfamiliar with the rapid classification method, class III is not something you would want to try in a kayak unless specifically trained. For more photos and coverage on Wiley Waters rafting, check this post out.

Two days later, I was on the same stretch of river, but instead of a raft, I was in a float boat with Silver Bow Fly Shops casting a fly rod. Another question to ask is how many urban areas have world-class fly fishing in a river that flows through downtown. The answer is once again Spokane. I honed my fly fishing skills while mercifully letting several trout off the hook with my lack of skill setting the hook. On the last stretch of river, I finally landed and released a beauty. Despite only catching one fish, the action proved plentiful.

The walls of the Spokane River canyon were wide as we rolled through the valley on rafts. We could see the imprints of mountain bike trails along the valley walls. These trails increased as we entered Spokane Riverside State Park. Our raft guide explained there were tons of mountain bike trails along the Centennial Trail. In fact, in the state park, there are 55 miles of biking trails.

After the natural adventure was over, there was plenty to do in the Spokane area. Our group was in town during the Volume Inlander Music Festival. Eighty bands played over two nights at the local bars. Even if you are not in town during this festival, there is guaranteed to be some good live music at one of the local venues that hosted acts during the music festival. All of these venues are within walking distance of downtown.

There is no shortage of good craft beer in town. I enjoyed Shin Splints IPA from nearby Orlison Brewery and many Big Juicy IPAs from No-Li Brewery. If whiskey and the hard stuff is more your thing, then check out Dry Fly Distillery. Dry Fly Distillery specializes in farm-to-bottle distilling.

I experienced my first ever wine tasting at a winery, and what an introduction. We gathered atop a bluff overlooking the Spokane River at Arbor Crest Wine Cellars, sipping all types of delicious wine while soaking in the spectacular scenery. After that, it was on to Townshend Cellar Wines for more tasting. The highlight here was drinking red wine coveted by Eddie Vedder.

The restaurant and coffee scene is also thriving in Spokane. On our first night, we enjoyed an amazing eight-course meal from local Chef Adam Hegsted who is the brains behind the Wandering Table. The second night, we dined at Mizuna Restaurant. I enjoyed a delicious mahi-mahi special, and all the plates that were served to our table looked amazing.

I loved the amazing adventures in Spokane, Washington that existed in such close proximity to 600,000 people. Despite the population density in the area, it was a snap to find amazing outdoor adventures just downstream from the city or down a bike path.

I was a guest of Visit Spokane Tourist Bureau as part of a press trip highlighting the region during the Volume Inlander Music Festival. This post is not impacted by this as the opinions and photographs are my own.