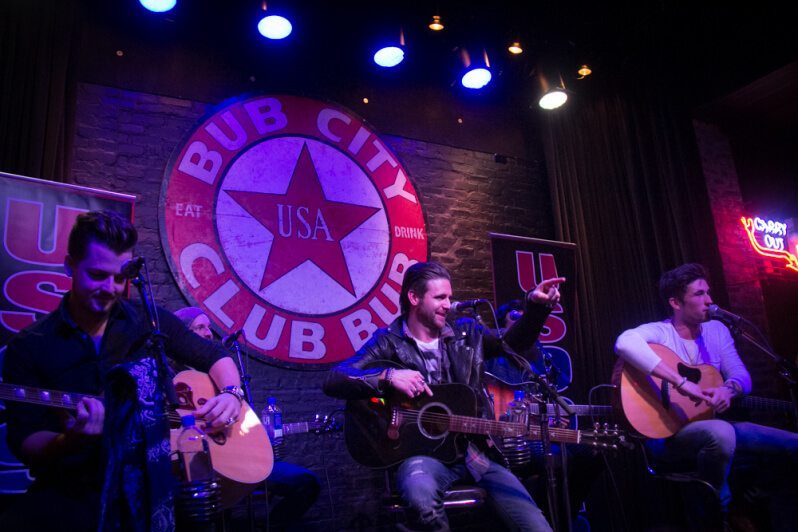 One of the key factors of success in today’s country music is that there is a surge of songwriters who are emerging as country music artists themselves. Every year, only once per year, Chicago’s US99.5 presents three of country music’s current rising stars in an exclusive event that they have named Smokin’ New Country.

This year, the concert took place at Bub City on January 26, 2016. Smokin’ New Country is a songwriter’s round style concert, where the three artists – this year featured Chase Bryant, Canaan Smith, and Michael Ray – sat on stage in chairs, sans full band, and performed a stripped-down acoustic set. Each artist was set to perform three songs a piece, but in true country fashion, they rallied on stage to make the spontaneous decision of each adding a fourth song. Here are a few highlights from the night!

Chase Bryant made sure to give credit where credit is due when he referenced the first time he visited the US99.5 studio, and he played “Take It On Back”. He said he knew that after playing it for Jeff, that it would be his first single, and he will never forget that moment. Jeff Kapugi (of US99.5) is a revered name in the country music industry, as he is responsible for recognizing raw talent and allowing it to permeate our ears via US99.5 radio. “Take It On Back”, a song that Chase Bryant explained was written when he was experiencing defeat as a songwriter, also became Chase’s first song to hit number one on the charts! To all of you struggling songwriters/musicians, how’s that for some motivation to never give up? Watch this exclusive clip of Bryant’s current single, “Little Bit of You” from the Smokin’ New Country event.

Mercury Records recording artist, Canaan Smith, certainly rocked the house with his current single, “Hole in a Bottle”, but the biggest goosebumps moment was when he sang his first number one hit, “Love You Like That” while Chicago enthusiastically sang back every word. The gratitude seemed to overwhelm Canaan in the best way, as his one-hundred-watt smile lit up the room for the remainder of the evening. After the show concluded, Smith remained on stage until every fan in attendance had their chance to get an autograph or snap a selfie. Canaan Smith, alongside his stage-mate for this event, Michael Ray, will be opening for country superstar Brantley Gilbert, on the Blackout Tour this spring. Enjoy this exclusive clip of his smokin’ new song, “Come Back To Virginia”, which he debuted at Smokin’ New Country!

Michael Ray orchestrated one of the most spontaneous moments of the night when he brought up a random man from the audience (who was celebrating his birthday) to take a birthday shot on stage. Chase, Canaan, and Michael made a toast to Chicago sports teams and “Frank The Tank”, the special birthday boy before slamming their jager bombs while the crowd roared with applause. Among the songs performed, was “Run Away With You”, which Michael co-wrote and Big & Rich recorded. It became Ray’s first number one as a songwriter. Before performing “Kiss You in The Morning”, his first number one as an artist himself,  Michael Ray left us with the final comment of the night. He thanked everyone in attendance, with special mention to US99.5, humbly gushing, “It’s an honor for a radio station like US99.5, in a city like Chicago, to pick the three of us to play an event like this.” Check out this exclusive performance of his current single, “Real Men Love Jesus”.

Header Photo credit to Christine Newsom of US99.5