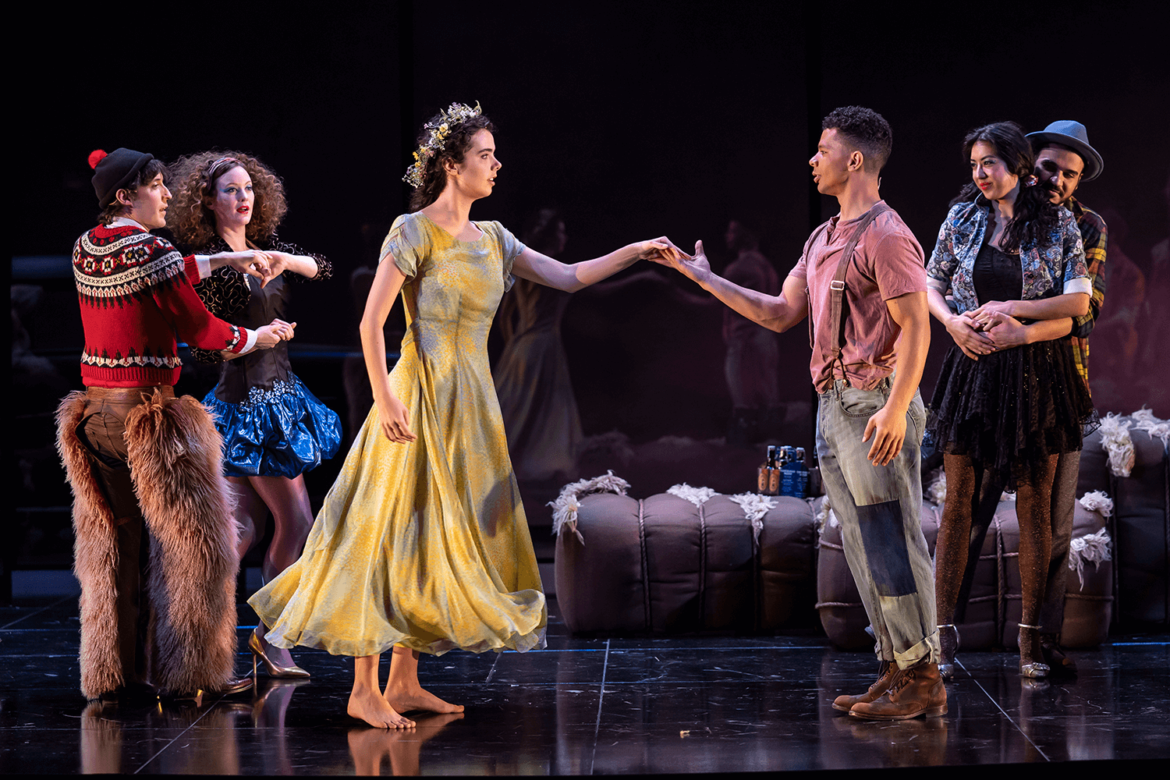 REVIEW: ‘The Winter’s Tale’ at the Goodman Theatre

When you think of William Shakespeare, you think of Romeo + Juliet, Julius Caesar, Hamlet, or Macbeth. You may think of his comedies as well, such as A Midsummer Night’s Dream, but it’s the tragedies that stand out more than any other. Shakespeare wrote plays that have stood the test of time and captivated audiences for centuries. He wrote of love, jealousy, grief, sorrow, hope, humor, and the intensity of human emotion.

It is those qualities that have found themselves boldly displayed during The Winter’s Tale now onstage at the Goodman Theatre through June 9.

The play follows King Leontes as he struggles with his jealous fury towards his pregnant wife, Hermione, and his close friend, King Polixenes. Leontes dreams that their bond, a bond that he has encouraged, is something else, something more salacious. He wishes Polixenes captured, arrested and hanged. Trusted advisor Camillo warns Polixenes and helps him escape back to Bohemia immediately.

As for Hermione, she will also stand trial for her crimes against him; crimes that include adultery that lead to a bastard child and a plot to assassinate Leontes. Through the overload of the allegations cast against her, she finds herself giving birth much sooner than she anticipated. When the child is brought to Leontes, he refuses to claim the child as his own and demands she be killed, even though he has learned that his wife has passed in childbirth.

A close friend, Paulina, played absurdly well by Christiana Clark, convinces her husband to merely take the baby far away instead of having the child killed. He sails for Bohemia and leaves the child in the forest to be found. An Old Shepherd happens upon the child and his son, upon finding the trove of gold that she was left with, takes the baby home and raises her, Perdita, to help with the sheep. Years later, she finds love with the Prince Florizel; a match his father Polixenes forbids.

However, great Camillo finds that in order to get back to Sicilia, he will take the prince and Perdita on a ship so that they may be married and he can get home. But once she arrives home, they learn of her true identity. She is the princess come home and Leontes, seeing the error of his ways, realizes all of the wrongs that he allowed his jealousy and insecurity to yield. Perdita is taken to the statue that Paulina has erected of the queen. It’s there that we learn that she has not died, but merely been hidden away until the truth could see the light of day.

They come together once more as a family and forgive all that has transpired. Perdita and Florizel are free to marry and everyone lives happily ever after.

This was a play both intense and fanciful. The entire first half is difficult to view as you see Leontes spiral out further and further without realizing that it was his jealousy that was creating dark thoughts. Instead of listening to those around him, his family falls apart, he loses his best friend and he’s seen as a tyrannical leader who should not be questioned lest one wished to be killed. The feelings were palpable, which is a testament to the actors. Leontes was brought to life by Dan Donohue and he intimidated the audience from the stage. You believed every word. Christiana Clark had so much emotion that you felt like you were imposing. It was truly magnificent.

The second half was a complete 180 from the first. It was light and fun, filled with fuchsia confetti and giant sheep. A petty thief starts the second half with a few songs and welcomes you to fair Bohemia. The stage comes alive with music, laughter, and brightness. This half is all about what has been going on in Bohemia for the last 16 years and fixing the wrongs. The Old Shepherd, played by Tim Monsion, and his son, played brilliantly and hilariously by Will Allan, provided an immense amount of levity that changed the mood from the first half. The crowd was roaring with laughter and could not get enough.

What was jarring was that it was so split. The first half is tragedy while the second half was comedy. So, to say it was either would be a disservice. It was a tragomedy, if you will. When you think it doesn’t work, it does, and this adaptation of The Winter’s Tale proves that. It didn’t feel stale or dated; it felt like it could be an Oscar-worthy movie that everyone would see.

The Goodman Theatre’s production of William Shakespeare’s The Winter’s Tale was truly spectacular. The show’s runtime is just over two hours with an intermission. The Winter’s Tale will end it’s run on June 9th, so make sure to get your tickets now!