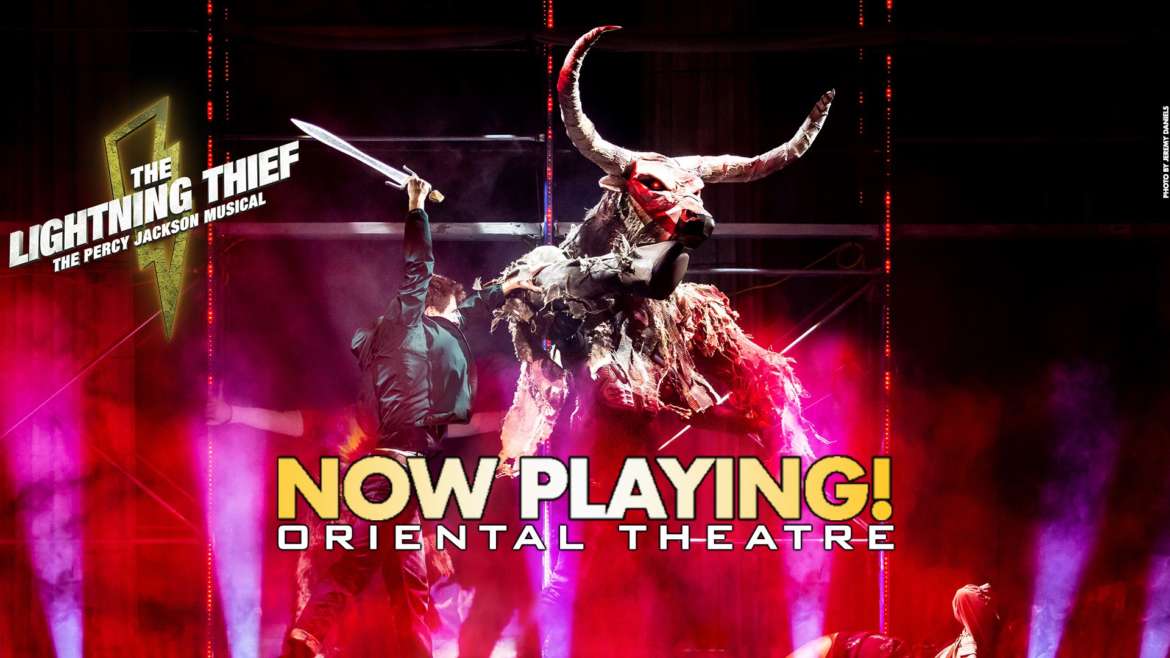 Chicago is a wonderful place to be if you love theatre. The city is packed with theaters both big and small and hosts some of the most popular shows and the best hidden gems. But taking your kids to the theatre can be tough when the subject material isn’t always family friendly.

However, if you’re looking for a fun theatre experience for the whole family this week, the gods have looked down upon this fair city and gifted it The Lightning Thief: The Percy Jackson Musical!

Playing through this Sunday, January 13th, at the Oriental Theatre, the first book in the Percy Jackson Greek mythology series comes to life with all of reader’s favorites characters: Percy, son of Poseidon, Annabeth, daughter of Athena, Grover the satyr, Chiron, Dionysus, Hades, Poseidon, Ares, and more!

Having been a huge fan of the series myself, I went into the show with reservations. How were they going to do the special effects? What was going to be missing? How was it….a musical? I was luckily accompanied by three children who had also loved the series but had significantly lower expectations that myself.

It’s clear from the beginning that this is not your ordinary show. Instead of an orchestra down in the pit, a small collection of musicians were elevated to the wings of the stage as part of the set. The set itself is utilitarian and makes it easy for the cast to bring props for transportation or mythical creatures, such as the furies, to the stage.

The show starts with a literal bang as we’re thrown right into the music. The Greek gods and goddesses exist and their kids hate them. We’re then introduced to Percy Jackson, an outcast who’s on a school field trip, as he sings his way through “The Day I Got Expelled” about a harrowing experience with his creepy teacher, Mrs. Dodds. The first act, lasting an hour, seems to fly by with song after song. The second hour breezes by just as quickly finishing with the show’s 18th song “Bring on the Monsters.”

While the book clocks in at 416 pages, the show’s two hour run time glosses over a great deal of the story. As with any book heavy on special effects, translating them to the stage can be difficult and costly. Instead, they explained certain plot points that would have taken a few chapters in the book in just one or two songs onstage.

As the kids I was with quickly pointed out, certain aspects that were crucial to the story were left out, but the heart of the story was still there. So, if your kids are die-hard fans, it would be wise to remind them that certain points will be omitted or demoted to minor details.

However, the show still shines. Its rock-inspired soundtrack will certainly keep everyone on their toes, the use of toilet paper guns in lieu of Percy’s water powers was ingenious and the writing was funny enough to keep everyone laughing whether they understood the joke or not.

If you’re looking for a fun night out with your kids during our current cold streak, this would be a great option! Tickets start at $25.

By the beard of Zeus, hurry up! This limited engagement ends Sunday.