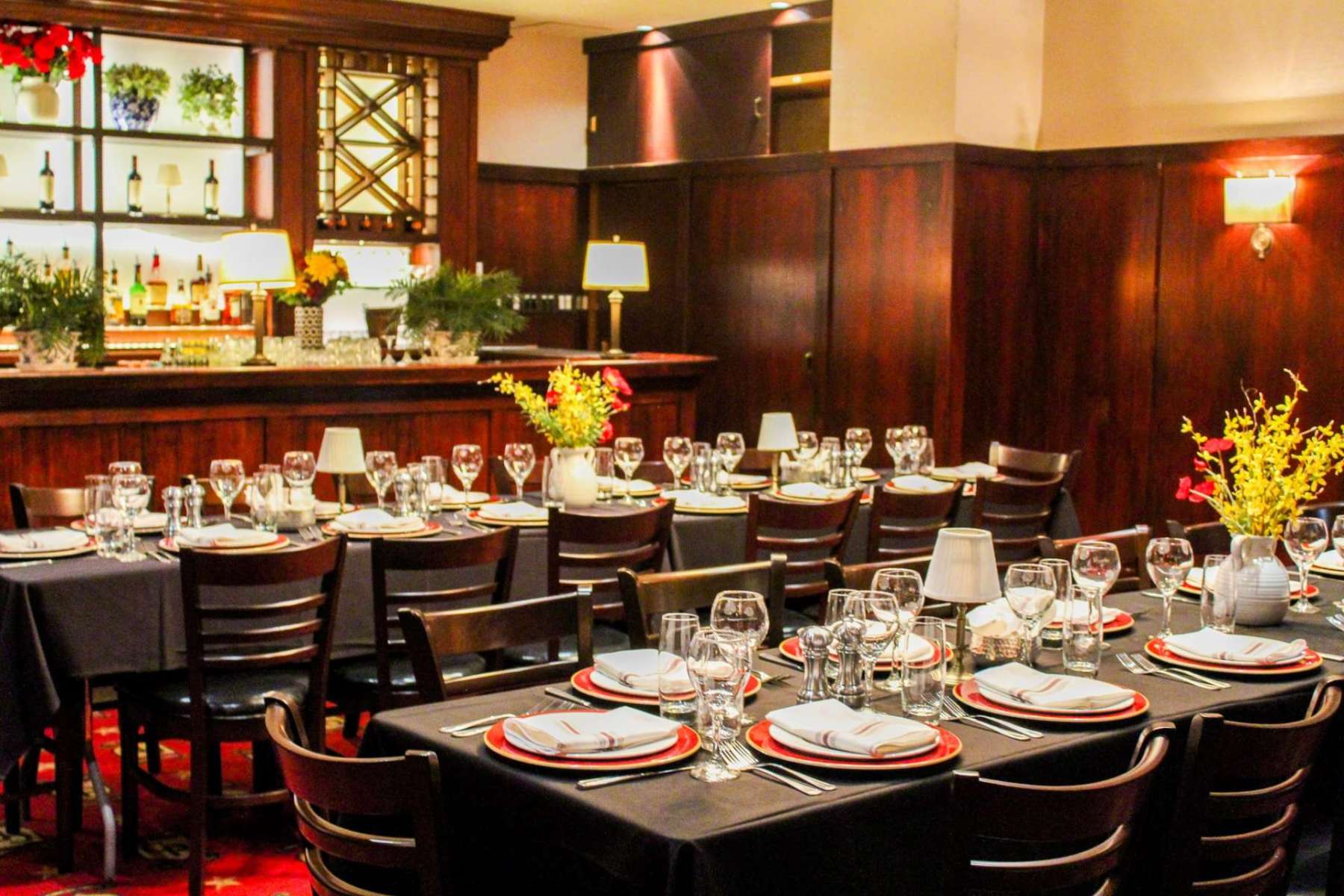 Holidays are not always all jolly. As the winter storm officially hits Chicago, many truggles to find shelter, warmth, and a community to call home. Unfortunately, homelessness remains an epidemic in our beautiful city. In 2020, Chicago reported at least 65,000 people experiencing homelessness. In response, Mayor Lori Lightfoot included a $10 million budget in the 2023 Budget Proposal to tackle the problem. However, homelessness is a humanitarian issue that requires every individual in our communities to do what they can. As Christmas draws near, bartender Terrence Wilson is partnering with Petterino’s to give away 500 Christmas meals, not only to feed those in need, but to provide the sense of belonging and community much needed by those struggling with homelessness. The meals will be served at Petterino’s from 2pm to 5pm on Christmas.

Donating 1/3 of his income each year to cook for and deliver meals, gloves, hats and other basic necessities to his “brothers and sisters in a homeless situation” every Christmas, Terrence Wilson is the founder behind Chicago Life Cares, a nonprofit organization dedicated to providing support, opportunities, and resources for homeless individuals in Chicago. Today, we had the honor to bring Terrence in to talk about his experience with homelessness, his act of giving, and what he sees as the city’s solution.

Q (Urban Matter): Thank you for joining us today, Terrence. Let’s start with your role at Petterino’s and why giving back to the community is at core of what you do and what you believe.

A (Terrence/Petterino’s): Thank you. I started with a nonprofit of my own 12 years ago when I lived in Charlotte, NC. And I saw such a huge need for help with the homeless community there. I moved to Chicago 5 years ago. When I moved here, I was actually in a homeless situation. I knew I wanted to move here, I knew if I continue to wait until I saved up money, who knows when I’d finally make it? So I took the chance and moved here with $600 in my pocket. I stayed at a homeless shelter with 76 other men while managing a restaurant by day, which allowed me to actually hire some of the people in the homeless shelter to work with me at the restaurant, thereby providing them an opportunity for a better quality of life as well.

Q: During that time, did you receive help from any community organizations in Chicago? Or did that experience actually bring your attention to a lack of resources for the homeless population?

A: It brought my attention to a lack of resources for the homeless community. I saw that there were a few organizations in place, but weighing that against the number of people who were in homeless situations, it just never seemed to be enough. It felt really important for me to be involved in whatever way I could.

Q: Based on your personal experience, what do you consider to be the biggest issues with Chicago’s current homeless epidemic?

A: Homelessness plagues every single community and neighborhood here. You can walk around downtown or any other neighborhood and there would be someone in need, whether sleeping at the bus stop, park bench, or on the grass in a tent. I’ve seen people post things saying America doesn’t have a hate problem — it has a heart problem. A part of what it is is that we put profits over people and sales over souls. I think that if there were more people who took just ten minutes every day to greet the others in the community, that would be an active love in itself, and that’s a large part of what I do. If I see someone in the street who seems to be hungry, I’ll get them food. It’s just who I’ve been because I believe all people deserve the same quality of life.

Q: That’s a fantastic belief to hold close to your heart. So I’ve heard that this is also you continuing your late mother’s legacy. If you don’t mind, we’d love to hear more about your relationship with her and how she has impacted you.

A: Back when I was a teenager and all my other siblings finally moved out of the house (I couldn’t wait!), my mother and I would spend Thanksgiving and Christmas down at the local shelters, helping to feed those in need. We got involved through a friend of hers, and it just felt necessary. And obviously, once I moved here, I continued that as much as possible.

However, my mother passed away this past April, so this will be my first Christmas without her and it felt extremely important to me that I live and celebrate in the way she would. So everything I do is because I know that’s what she would do if she were able to — if she were still alive. She was my inspiration and my life’s work is a tribute to her legacy.

Q: I’m sure she will be very proud seeing everything you’re still doing on behalf of her. Now, could you give us some details for the Christmas you’ll be giving away at Petterino’s?

A: Petterino’s agreed to donate the venue to us, which was awesome. I’ve tried to do something similar before with other establishments, but that didn’t turn out so well. However, we have this now. So we’ll prepare and package the meals and distribute them through the patio area, and we’re hoping a great, solid turnout. We are prepared to feed up to 500.

Q: As you’re well aware: not everyone will feel comfortable to go to Petterino’s and the area it’s in for the meal giveaway. And this is just a neutral, simple fact. What are your thoughts on that?

A: Absolutely. If we don’t get the turnout we’re looking for, a couple of us have larger vehicles and will go out to the community. So, one way or another, we’ll make it happen. Even if we end up getting fleet vehicles.

Q: That’s absolutely wonderful. Are you collaborating with any other organizations on this giveaway?

A: No, I haven’t collaborated with any other organizations on this. However, when I presented the idea to one of the chefs at Petterino’s, her resolve to be a part of this was quite moving. The ball started rolling from there. I presented the information then to Gary and he made magic happen. I don’t think I can thank him enough for the care he put into it and how he fought to make this happen. Then volunteers just started signing up and giving their commitment to make this as successful as it can be.

Q: You mentioned you’ve tried to do this in the past. What were some of the major difficulties or challenges you’ve faced?

A: Petterino’s was 100% onboard this time, and donated not only the venues but a generous sum of money to help make it happen. However, some problems I’ve faced in the past mostly came from older men and the Chicago Police Department. Some of the “nos” I received early on was explained with high violence and other similar concerns, or that I didn’t provide enough turnaround time for them to do something like this. Those were the things I was told before, which was why I was so utterly thrilled when I got a yes from Petterino’s. It felt like this was really happening the way I envisioned it happening.

Q: That is fantastic, and yes, those are very common pushbacks to experience. Now that we’re approaching hte ned of the years, what plans do you have for 2023?

A: It’s mostly just making sure people have food and winter accessories. Myself, I’ve bought hats, gloves, socks, and other necessities and had a former highschool-mate who shipped two packages of emergency blankets to the restaurant as well. My goal really is to continue moving forward with love to make sure everyone feels loved in whatever fashion we’re able to give them.

Q: What is the best way for people to get involved with volunteering, donations, and other support for you and your foundation?

Q: Finally, what do you see as the real solution to Chicago’s homeless problem? What can every community do to tackle this problem and make it better?

A: Just remember homeless individuals are people — humans, spirits, souls. They’re no different than anyone else in the city. If we can address the homeless issue with that mindset, then, we’re already heading in the right direction. One year ago, I was in Gold Coast and someone approached me for some money. I said I didn’t have any on me. He began to sob and said he was just tired of being ignored and treated as if he was less. So, we just need to remember that even if we don’t have anything to give out of our pocket, we can at least give 30 seconds of “Hi, how are you.” What I see is I want to love God’s people the way God intended them to be loved. I think that’s the first step.

On behalf of our communities, I am very grateful to Petterino’s and Good Plate Hospitality. I hope we have such a great turnout that we have to scramble and put together extra meals. And I hope more feel inspired to do things like this, even if they don’t join our organization.