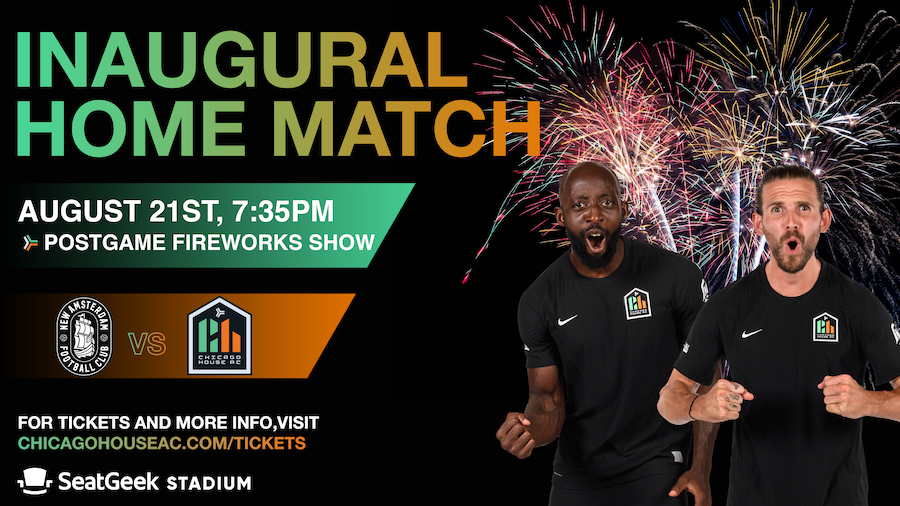 You’ll struggle to find a Chicago sports team more ‘authentically’ Chicago than Chicago House Athletic Club. Everything –from the name, to the color scheme, to the front office and roster, to the mission statement of the club; everything perfectly curated to be so unique to this city that there couldn’t be a mistake. We’ll dive into the details as we proceed, but, beginning this Saturday August 21st, you can experience first-hand the glory that is The House as Chicago House AC kicks off their inaugural home match at SeatGeek Stadium in Bridgeview, IL.

Founded in 2020, Chicago House Athletic Club is a community-based professional soccer team that plays its home matches at the 20,000 capacity SeatGeek Stadium at 71st and Harlem in Bridgeview, Illinois. The team competes in the National Independent Soccer Association (NISA,) a U.S. Soccer sanctioned third division league. Led by Managing Partner, President & CEO Peter Wilt, Chicago House AC is a Public Benefit Corporation (PBC) committed to using its platform for social justice, diversity, equality, inclusion and community improvement. The club’s name is a tribute to House Music, which was created in Chicago in the early 1980’s.

One of the first things you might find yourself wondering is, why did they name themselves Chicago House AC? It all started with management who wanted this new franchise to be part of the Chicago community. And in their effort to start that relationship off the right way, they turned to the fans for ideas on what to name the team. The name “Chicago House” was coined by Brian Costin, who said, “Chicago House music has always been about peace, love, and acceptance, and has influenced music culture all over the globe,” in a statement released by the club. Fan voting eventually whittled the options down to Chicago House and Point Chicago at the end, with Chicago House taking over as a heavy favorite.

After they found themselves with a new name, Chicago House AC needed a logo. The current design, which was also developed using fan submissions, ties the city’s history, musical culture, and sport into one. The lines form the letters ‘Ch’ and also represent the Chicago skyline. The colors of the logo have meaning too, with the black used to represent the city’s founder, Jean Baptiste Pointe du Sable, the green comes from the lion sculptures outside of the Art Institute of Chicago, and the rusty-orange pays tribute to the industrial past of the city.

To purchase your single-game tickets now, head to Chicago House AC’s website. The House also has season and group ticket packages for purchase.