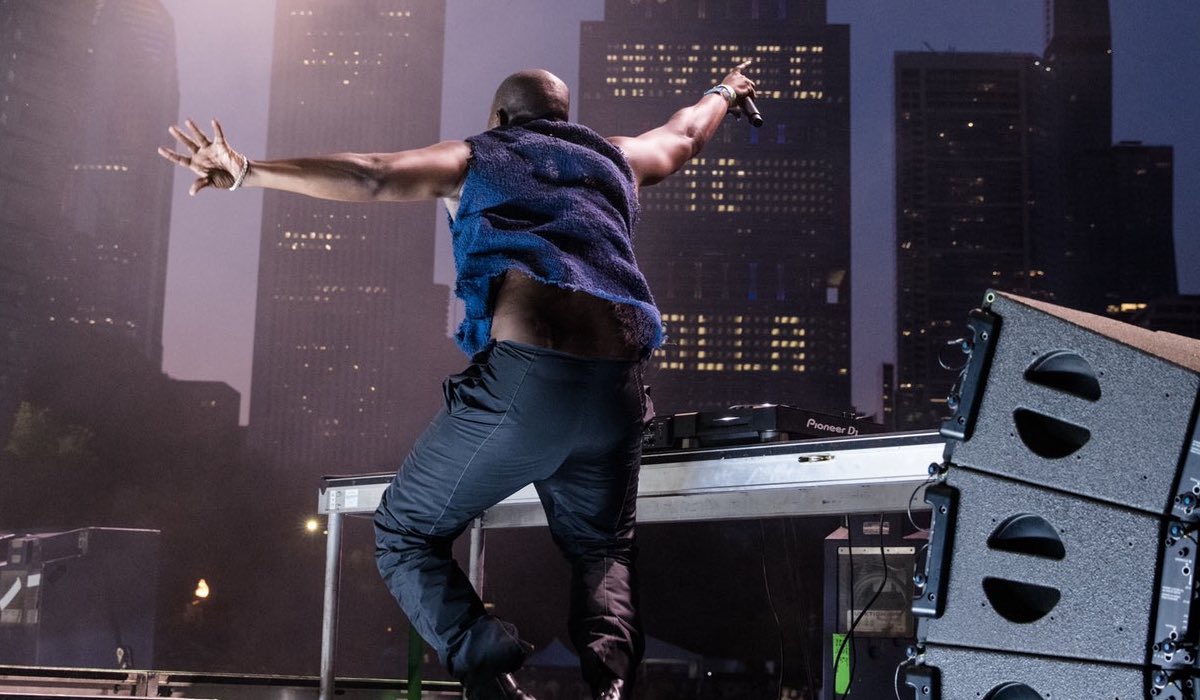 Nesbitt Wesonga Jr. (‘Nez’) was on shift at Bloomingdale’s when he heard the news. He and his production partner were nominated for a Grammy for their work on ScHoolboy Q’s Oxymoron album.

“It was crazy,” Nesbitt told me just hours before his Lollapalooza performance in Chicago. “I was still working a job in LA at Bloomingdale’s. I was literally on my day off, and my brother called me and told me, ‘Bro, you’re Grammy-nominated.’”

Nez is Nesbitt’s musical alias (as you might have guessed). Nez and Rio went to the same grade school and high school before going into music professionally. The duo would also produce well-known tracks like ScHoolboy Q’s “Man of the Year” and A$AP Rocky’s “Lord Pretty Flacko Jodye 2.”

Really, you don’t have to look far to see how established this artist is. What’s even more impressive, however, is what this artist is doing next: take nearly a decade in the studio and translate it to the stage. It’s even harder to do than it sounds.

As a solo artist, Nez kept his collaborative approach going with “Wild Youngster”—a loud and irresistible house track with vocals from ScHoolboy Q.

“I think because of my closeness with ScHoolboy Q and A$AP Rocky, I’ve learned the most from them,” Nez noted. ”They’re just so open in terms of giving me information and, Q just being so supportive of my first artistry and just like, you know, allow me to help get a bigger platform as an artist by just jumping on my first record.”

Once he found his sound, Nez said that everything started opening up for him. He recently collaborated with Chicago-born act Louis the Child (arguably one of the hottest acts in all of electronic music). Despite his Windy City background and heritage—Nez has more Spotify followers in Los Angeles than he does in Chicago.

Like every artist playing that day, however, Nez’s spotlight was shared with an artist that did not play on Sunday. Lollapalooza dropped DaBaby from his headliner spot for inexcusable remarks about the LGBQT+ community.

You didn’t have to look far for people expressing their disapproval.

Long before the announcement about DaBaby, Nez revealed he has quite a different perspective on music’s role in bringing people together. Specifically, the two genres that define his new sound (hip-hop and house music).

“Both genres that I’m bridging the gap on started because they felt that they were excluded,” Nez said in this Paste Magazine article. “A lot of people don’t realize the pioneers of house music are Black and Latino gay men. On the rap side, they felt like all they had was these turntables and a microphone to be able to create the music that they felt was in their hearts.”

Chicago produces some of the most talented musicians. During his set on Saturday, Freddie Gibbs even referred to it as “the best music city.” I thought back on this comment during my interview with Nez on Sunday. I wondered, is Chicago the best music city because of the level of talent it produces, or the type of talent it produces? Does it create musicians focused on inclusion, not insults?

In Nez’s case, the answer is most certainly yes.

“I am a supporter of all people. You know what I mean?” Nez responded about his Paste Magazine quote. “I don’t feel like marginalizing or degrading anyone in any way, shape, or form.”

The interview came to a close, and Nez was still cool as a cucumber.

You would have thought he’d done this a million times before. He can write, spin, produce, provide vocals. Despite starting 15 minutes into the Foo Fighters (and just minutes before the other headliner acts)—the crowd at Lollapalooza in Chicago got bigger and bigger with each song. As floods of people left the first chunk of Foo Fighters to go see Young Thug, more and more stopped as they passed.

You didn’t have to look far for people expressing their approval.

First show ever and it happened to be in his hometown at @lollapalooza. Was a vibe @NEZsoridiculous pic.twitter.com/qMVJEYORTm