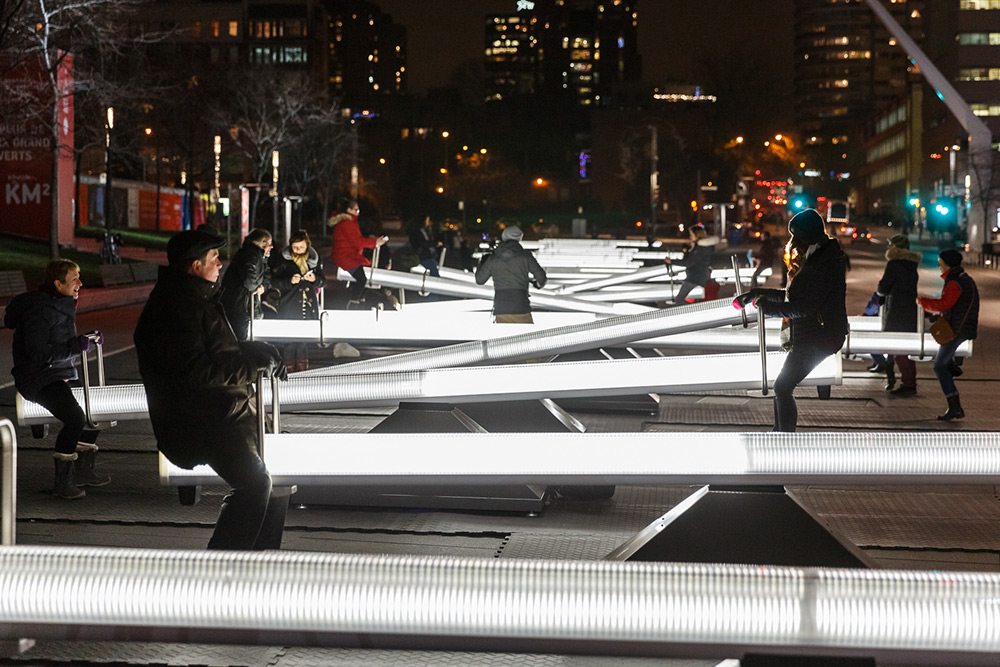 Navy Pier Will Have Illuminated, Musical Seesaws This Spring

This isn’t your ordinary playground

According to DNAInfo, an installation of LED-lit, sound-equipped seesaws will be placed in Polk Bros. Park at Navy Pier this season, open and free of charge to the public from Friday, March 10 through Friday, May 12 during the Pier’s regular hours of operation.

This unique attraction that’s built with motion-sensory technology is an interactive work of both art and recreation that is brought to life when used by people. Inspired by the cover art of the 1979 Joy Division album Unknown Pleasures, it represents the relationship between visuality and sound. When the seesaws are used together, they create unique sounds and exciting illuminated movement in an otherwise ordinary urban setting.

The installation was created by Impulse, a division of Lateral Office which specializes in experimental design in architecture and landscape, headquartered in Toronto. The illuminated seesaws have also been brought to Montreal, Brussels, London, and Scottsdale.

As a landmark that’s always reinventing itself, this fun twist on a playground ride that both kids and adults can enjoy is one of many things that Navy Pier is instituting in order to expand their activities and increase tourism, such as last summer’s completion of the Centennial Wheel. This news also closely follows the recent announcement of The Rolling Stones “Exhibitionism” which is also coming to the Pier this year.

See these awesome seesaws in action in London’s Leicester Square.