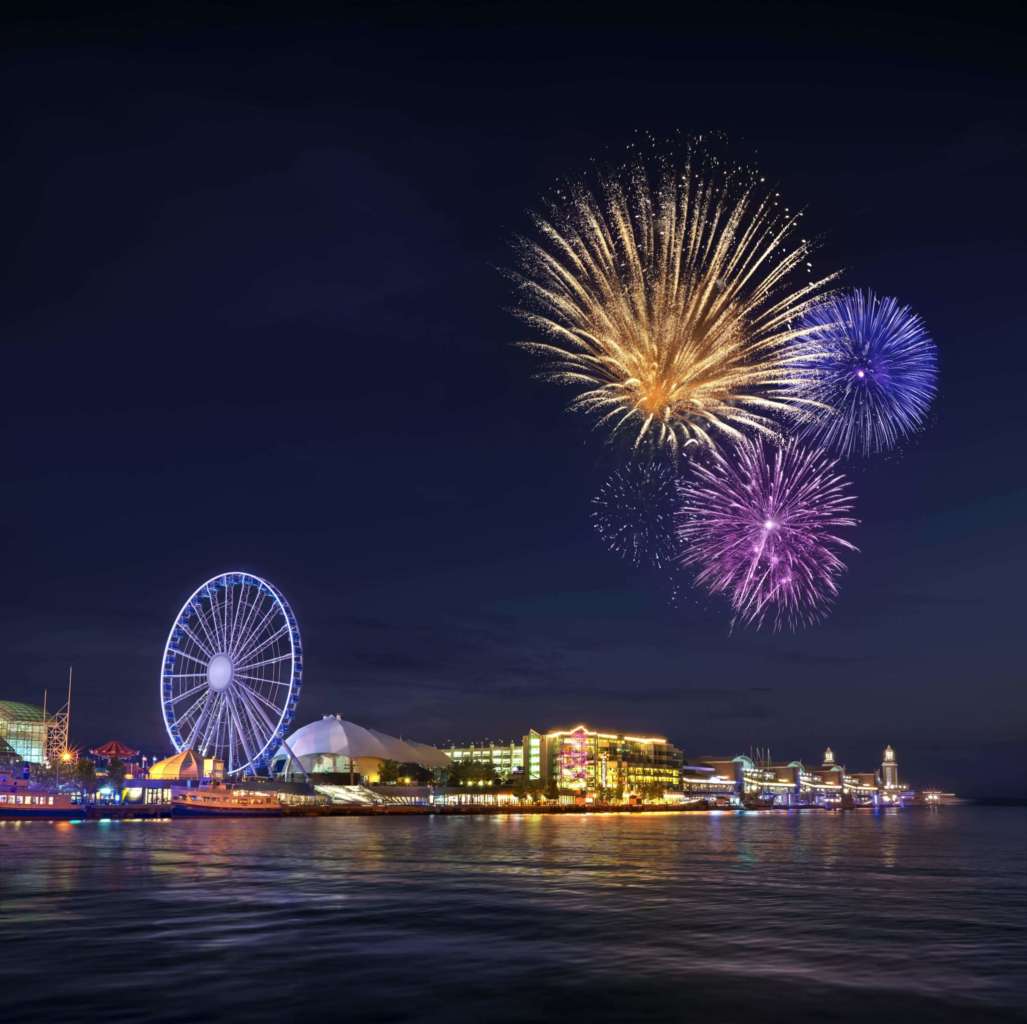 Navy Pier has officially announced the kickoff of its 100th-year celebration to commemorate its anniversary.

The Pier’s most sought out feature, the new Ferris wheel, will open to the public at noon on Friday, May 27, serving as the kick-off to the celebration and marking the completion of the first phase of the Pier’s redevelopment.

The new 196-foot wheel, aptly named the Centennial Wheel, has been under development for quite some time, and it’s unlike anything else in the U.S. You can see all of the details here.

Year-long festivities will include unveilings of park enhancements, new programming, and special events, more authentically Chicago dining options, and compelling landscape & design features that will continue to elevate the Pier’s status as an iconic destination.

“America’s next great Wheel is opening here at Navy Pier, befitting for Chicago as the birthplace of the very first Ferris wheel and befitting for Navy Pier as we commemorate 100 years as the ‘People’s Pier’,” said Marilynn Gardner, President and CEO, Navy Pier, Inc., the nonprofit agency that operates Navy Pier. “We’ve named our new wheel the Centennial Wheel to honor 100 years of amazing Chicago history and as a nod to the next 100 years, as we continue the historic Centennial redevelopment of the Pier and provide every guest with memorable Chicago experiences.”

Tickets for the Centennial Wheel will go on sale May 20, and newly expanded ticket options will allow offer discounts for military and children, while regular riders will have the option of purchasing a “fast pass”. Illinois residents will also receive free and discounted rides on specific dates.

“Navy Pier is an icon in Chicago,” said Navy Pier, Inc., Chairman William J. Brodsky. “This new Centennial Wheel is one of many examples of the continuing investment we are making in the Pier’s future to ensure that Navy Pier remains the top regional leisure destination and a source of pride for every single person who visits Navy Pier.”

The kickoff of the 100th-year celebration marks the completion of the first phase of Navy Pier’s comprehensive redesign and redevelopment.

“Seeing is believing and we can’t wait for our guests to experience first-hand the changes at Navy Pier,” said Gardner. “Now more than ever, Navy Pier will be a go-to, special place for family outings, dinner & a show, exhilarating nightlife, an elevating ride on our new, modern Centennial Wheel, entertaining out-of-town guests, or enjoying a beautiful walk by the lake.

In celebration of this achievement and the Centennial milestone, the Pier will host a summer packed with inaugural activities, ceremonies, festivals, and events.

Centennial Wheel: One of the city’s greatest icons returns to the Chicago skyline brand new and better than ever on May 27, beginning at noon. The nearly 200-foot wheel will be 50 feet taller than its predecessor, accommodate up to 180 more passengers per ride, and will feature temperature controlled gondolas that enable it to be operational 365 days year and provide the latest in Ferris wheel technology. Nightly, guests will experience the magic of the Ferris wheel as it lights up Chicago’s skyline. Show times will vary and will be coordinated with the Pier’s Aon Summer Fireworks Wednesdays and Saturdays and other fireworks shows that are held.

Polk Bros Fountain and Plaza: Navy Pier will unveil its dramatically transformed entrance with the introduction of the new Polk Bros Fountain and Plaza — made possible by the Polk Brothers Foundation, who generously donated $20 million in 2014 to rename and redevelop the park that serves as the gateway to Navy Pier. The inviting new plaza and signature fountain will open this summer, anchoring Polk Bros Park’s newly expanded green space. With more than 150 programmable jets, the fountain will mimic the movements of waves, schools of fish, or flocks of birds providing variety and interest. During the winter months, the fountain will convert to an ice skating rink. The rest of the park development will be completed in 2017.

South Dock Transformation: The completed transformation of the South Dock has resulted in one of the most beautiful stretches of open space in Chicago. This enhanced, environmentally friendly space provides guests with room for more enjoyable strolls and runs a mile east into Lake Michigan, with spectacular, unobstructed views of Chicago and stronger connectivity to water, all while increasing Navy Pier’s commitment to sustainability. The project is on track to be one of the first SITES® certified projects in the world.   Managed by the US Green Building Council, SITES® is the newest and most comprehensive international system for developing and evaluating sustainable landscapes.

Elevated Dining Experience: Navy Pier now features one of the top dining experiences in the city by expanding its South Arcade. The redesigned Food Experience opens up to uninhibited views of the lake with a curvaceous “wave wall” and provides a variety of authentic Chicago cuisine via partnerships with some of the most popular local restaurants. Restaurants include Big Bowl Chinese Express, Big City Chicken, DMK Burger Bar and Fish Bar, Frankie’s Pizza by the Slice, Freshii, Goddess and the Baker, Porkchop, Original Rainbow Cone and Snow Dragon Shavery. To come: Tiny Tavern, a new location of the popular North Side bar, Tiny Lounge, and additional new Chicago-based restaurants to be announced later this year.

PEPSI® Tall Ships® Chicago, a world-class nautical event, will return for another year, offering Chicago the chance to experience this treasured tradition of exploring some of the world’s most historic vessels dockside at Navy Pier.

The Aon Summer Fireworks Series will return as one of Chicago’s favorite summer traditions, with fireworks lighting up the skyline on Wednesday and Sunday evenings throughout the summer.

It will also include Fourth of July fireworks, the Centennial Celebration on July 15 and Venetian Night on September 10.

The development and Centennial Celebration will continue beyond 2016 as Navy Pier looks ahead to 2017.

Chicago Shakespeare Theatre recently announced its expansion with an innovative third performance venue, The Yard, a transformative, bold theater space that marks a significant cultural milestone for Navy Pier. It will open for the 2017/2018 season.

Navy Pier recently announced plans for a hotel for the first time in the Pier’s history and the selection of First Hospitality Group as the developer, providing guests the ability to spend the night on the Pier.

Public spaces along the length of the Pier are being continually improved through redesigned landscape and streetscape under the vision of James Corner Field Operations, which was behind for the award-winning High Line Park in New York.

As one of Chicago’s top venue spaces, Navy Pier’s Centennial Vision calls for continued investment in new free arts and cultural programming. Navy Pier is in the process of developing its Arts and Discovery strategic plan organized around the “pillars” of Arts, Culture and History, Environment and Community and will announce details of its pilot program later this year.

A key element of the Pier’s Centennial Vision will be transforming the Family Pavilion into a more open and refreshed space, mirroring the design of the South Arcade, but with a focus on retail. Construction plans are being finalized and Navy Pier will announce more detail in the coming months.