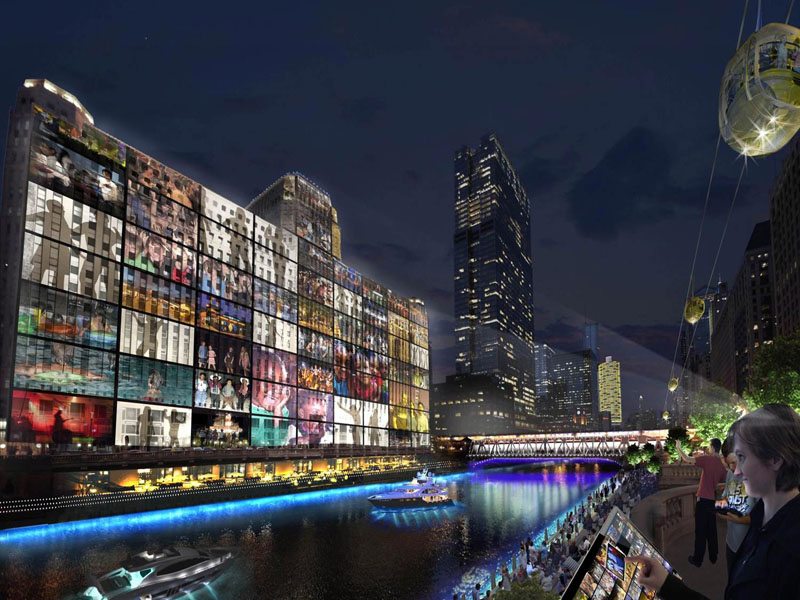 Around this time last year, we reported that the Merchandise Mart, one of Chicago’s most important landmarks, was the site proposed to host magnificent visual displays projected over the riverfront. As of yesterday, it’s been confirmed that this plan is officially moving forward.

Originally introduced as the Lighting Framework Plan in 2014 by Mayor Emanuel’s team and the tourism bureau of Chicago, the $8 million project will be privately funded by Vornado Realty Trust.

The river-facing installation, premiering this fall, will occupy almost three acres of space across theMART’s outer wall. It has been said to be the largest installation in the country.

Staying true to the city’s commitment to supporting public art, the Mayor’s Office assured that the projections on theMART will never be advertisements. Potential opportunities for artist submissions have also been discussed. This plan is one of many in the downtown area to increase tourism with creative urban planning, recreational space, and public art. The unique display might liken Chicago to cities like Paris or Las Vegas that are known for their massive displays. The privately-funded project at the Merchandise Mart might be the first of a handful of buildings in the city that might be used for visual projections.

Construction on the Merchandise Mart was completed in 1930, and it was once the largest building in the world at the time it was erected. Known for its iconic art deco style, the Mart houses floors and floors of space for art galleries, special exhibitions, and vendors.