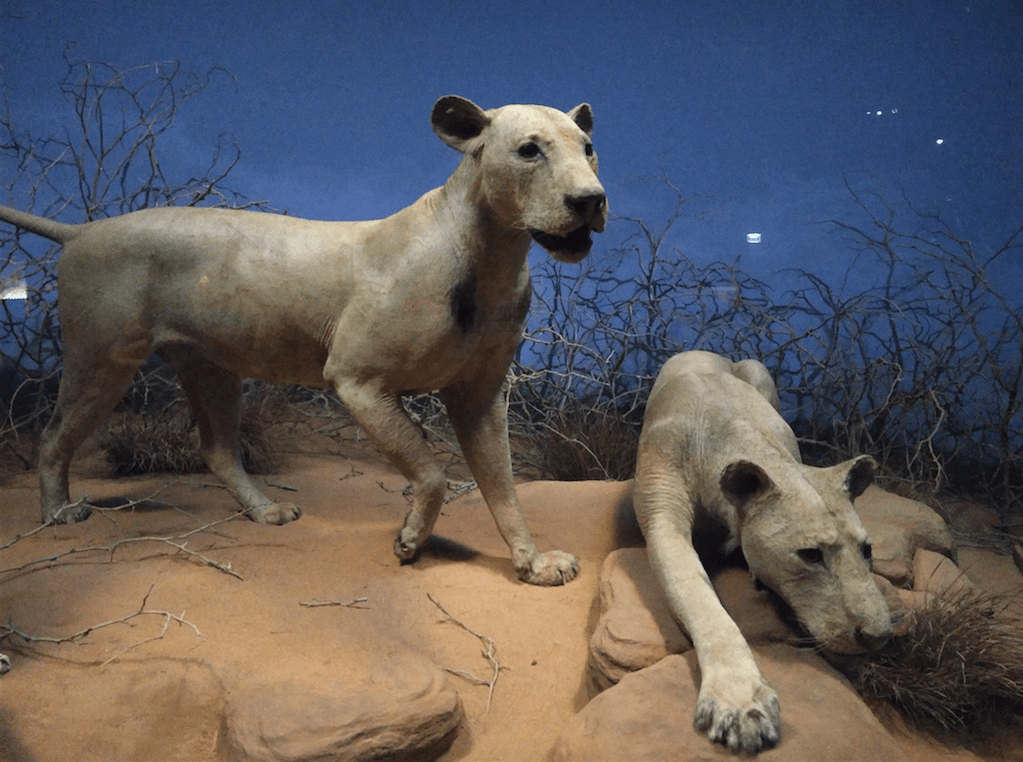 The Man-Eaters: Tsavo Lions at the Field Museum

The popular Tsavo Lions exhibit at the Field Museum is viewable on a permanent basis.

Martin Luther King Day dawned cold but bright, with the wind tugging at coats and scarves.

The entrance hall of the Field Museum presents both Chicagoans and tourists with amazing views: at the back, Sue the T-Rex greets the passers-by with a menacing look, and its own grandeur.

Two totem poles / can you guess at all the spirit animals carved one on top of the other?

The museum invites its visitors to take a calm stroll, first through their “Man Eater – Tsavo Lions” section, then with their Ancient America path, and the “Evolving Planet” journey.

All the exhibit have the virtue of enchanting children as well as adults, and teenagers. With its free admission day, we are surrounded by children who run between the taxidermied foxes, wolves, ferrets. A child stands awed in front of the brown bear, which in turn is standing on his hind legs. The child himself is scared about the bear, and we watch it respectfully, as if it could spring to life at any moment.

The art of taxidermy is splendidly portrayed – each species has its own habitat, and is accompanied by a detailed map of geographic areas in which it can be found. There are exhaustive explanations of behaviour, characteristics, and lineage.

The main attraction at the end of this plunge into nature is presented to us by the lions of Tsavo.

Mostly known and recognized for the 1997 movie “The Ghost and the Darkness”, these two lions are legendary. and their story begins in 1898, when the British started building a bridge across the Tsavo River, in Kenya. Colonel Patterson was who led the project: after nine months from the start of construction, the attacks started. Men were killed, and the killers were two maneless lions. The victims, in those months, amounted to more than a hundred. Colonel Bruce Patterson succeeded in killing the lions himself, in December 1898.

Currently on permanent display at the Field Museum, the lions are source and motif of scrupulous research. conducting various projects on site, in Kenya. There have been multiple studies on the Tsavo area where the lions roam, as well as their own den. Researchers are conducting genetic and ecological studies in order to better understand the circumstances and behavior of these lions.

There are ongoing studies on why these particular lions were brought to eat men. As it is known, lions are not commonly man/eaters; one of the possible reasons lies in the fact that, that specific year, and epidemic decimated the habitual preys of these hunters. Therefore, it is possible that they turned to man as a source of nourishment.

The Tsavo Lions’ skulls and skins were bought by the Field Museum in 1924 from Patterson, and it was the taxidermist Julius Friesser who succeeded in reconstructing the lions, as can be seen today.

You can learn more about the exhibit at the Field Museum’s official site.