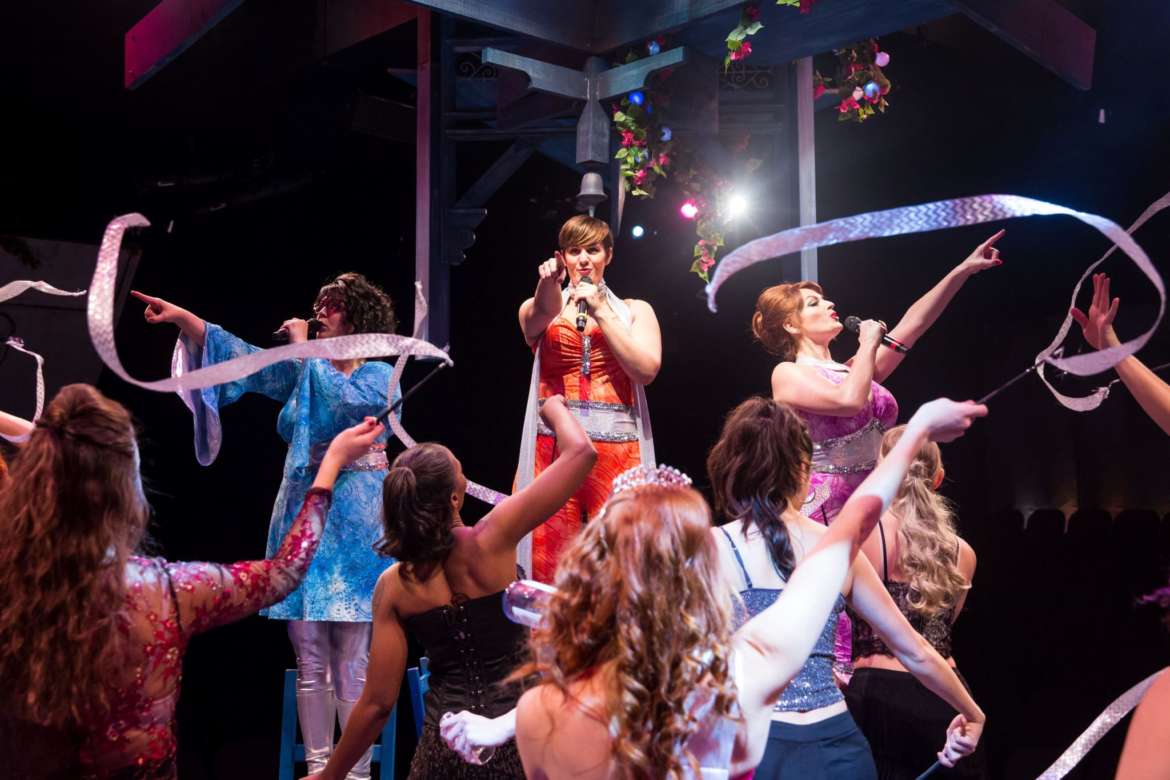 It was as if someone told the Marriott, “It’s February – turn up the heat,” and boy did they ever! One of Broadway’s longest-running hits, MAMMA MIA! is so hot, they’ve extended it through April 16.

The musical tells the story of the independent, carefree mother, Donna Sheridan, who’s raised her spirited daughter, Sophie, alone on an idyllic Greek island. When Sophie decides to get married, she wants her father to walk her down the aisle – the only problem is she has no idea who he is. She invites three men from her mother’s past to the wedding in hopes of finding out.

It’s 24 hours of non-stop fun and hilarity with ABBA’s high energy music and dancing that pulls out all the stops. In between it all, Donna’s best friends come back to share in the antics as old flames are rekindled and new love blooms – with a surprise ending that has the audience on their feet. Fusing explosive dance numbers with timeless songs, including “Dancing Queen,” “S.O.S.,” “Money, Money, Money,” and “Take a Chance on Me,” MAMMA MIA! had the audience singing along to all the classic favorites in this feel-good story full of laughs, love, family and friendship.

Danni Smith as “Donna Sheridan” is sensational. Her last outing in Marriott’s Man of La Mancha left the audience wanting more of her and it was fabulous to see her in a much broader role that befits her tremendous vocals. Meghan Murphy as the multi-divorcee Tanya smolders in her cougar-like role, and she can move! Tiffany Tatreau as Sophie Sheridan is adorable, with a voice that is both sweet and powerful.

Directed by the non-stoppable Rachel Rockwell who said, “The show is a story of the enduring female relationships in our lives – mothers and daughters, women supporting each other. Paired with these songs that we all love, it brings such joy. It’s a true love letter to that ABBA sound.”

Scott Davis’ set design is outstanding, maximizing the Marriott’s in-the-round setting by using the walls to create the feel of the Greek Islands and a few surprises thrown in. And in traditional Marriott fashion, the bright, colorful costumes by Theresa Ham take on a role all their own.

Performances are scheduled Wednesdays at 1pm and 8pm, Thursdays and Fridays at 8pm, Saturdays at 4:30pm and 8pm, Sundays at 1pm and 5pm, with select Thursday 1pm shows. Ticket prices range from $50 to $60, including tax and handling fees. Call 847.634.0200 or visit www.ticketmaster.com or www.MarriottTheatre.com for more information.