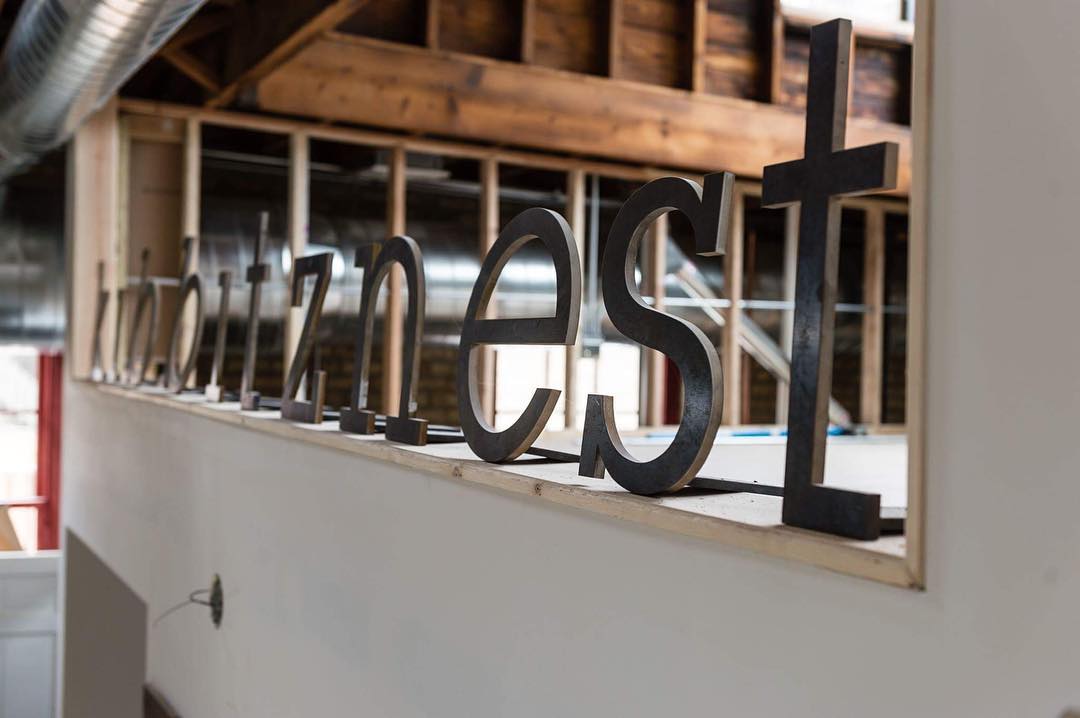 Lincoln Park Book Bar Has a Grand Opening This Thursday

A book bar that will encourage you to slow down and unplug opens in Lincoln Park this week. Kibbitznest, which will be the first wifi-free bookstore in the Chicago area, will celebrate it’s grand opening and inaugural book drive this Thursday, October 6. Started by Anne Kostiner, a longtime local developer, it will serve as a means to increase face-to-face interactions that have suffered as a result of electronic communication and overuse.

To celebrate the grand opening, Kostiner has invited photographer Eric Pickersgill to present on the organization’s mission to preserve “quality human interaction”. Last year, Pickersgill published a photo series entitled “Removed” which portrayed the awkwardness of social situations when electronics are removed from the picture (literally).

One “Removed” image depicts a newlywed couple, still in full wedding garb, who sit seem not to notice each other as they look intently down at where their cell phones would have been before removed from the image.

The picture captures the loss of meaningful human interaction. The fact that the series immediately went viral suggests that society does recognize the way electronics can drastically impact social settings, and that sometimes we need to “get off the grid.”

Work in progress. We’re gearing up for our grand opening October 6th!

Inspired by the Yiddish word kibbitz, which means to chat in a lighthearted manner, the book bar will be a place you can do just that. Seating will be comfortable and conducive to conversation. Laptops will not be allowed into the store and the use of cell phones will be strongly discouraged. Instead, there will be board games and a question of the week that will serve to stimulate discussion. Antique typewriters and record players will be on display and accessible to customers who wish to use them.

Academics and literature lovers will be pleased to know that the store’s book selection will be extensive, with plans to reach upwards of 7,000 new and used books. All books will promote a liberal arts education and rare books, that most other booksellers would have to special order, will be available on location. For example, there will be an assortment of university press titles, new and old, as well as books from numerous top academic publishers available to purchase.

Kibbitznest will also offer educational programming geared toward liberal arts. According to its proposal summary, “[Kibbitznest] will be a community classroom where people of all ages can share ideas and philosophies, and engage in problem-solving face to face. During Kibbitznest programming, the predominant theme will be a throwback to the appreciation of the liberal arts as we will collaborate with colleges, universities, museums, educators, writers, artists, cultural centers, other non-profits, and other individuals and organizations to bring worthwhile programming to the community.” Additionally, liberal arts themed products and gift items will be available.

Books, Brews & Blarney, the bar component of the “book bar,” will serve a variety of snack foods, including hot dogs, olives and cheese plates. Also available will be a section of beer, wine and “slow coffee.” Further, takeout will not be an option. Here you will be encouraged to “be present,” to enjoy the moment and your surroundings.

The above picture displays a few of the shop’s 52 newly installed skylights. The skylights, which face away from the equator to shield the store from direct sunlight, admit a significant amount of natural light to the 3,000 sq ft space.

Constructed in what was once a 1920’s machine shop, the Kibbitznest building is one of the last of its kind. Most have been torn down to allow for the construction of larger developments. The structure, which has been completely restored to its original design, is not the first reconstruction project for the Kostiners.

Anne and her husband Lewis Kostiner were the first developers in the West Loop to rehabilitate, restore and recycle turn of the century abandoned, boarded up warehouses and manufacturing buildings into rental lofts. Starting in 1987, the couple eventually restored over 1.5 million sq ft of property in that area.

Kibbitznest, registered as a 501(c)3 nonprofit organization, will rely on funding from its for-profit sister organization, Books, Brews & Blarney, as well as from donors and other future fundraising campaigns. After the store opens, the advisory council will meet to plan the upcoming programming series, which will also serve as a source of revenue.

For more information on the Kibbitznest Grand Opening and Book Drive, visit their Facebook page or check out their website under construction at a later date.