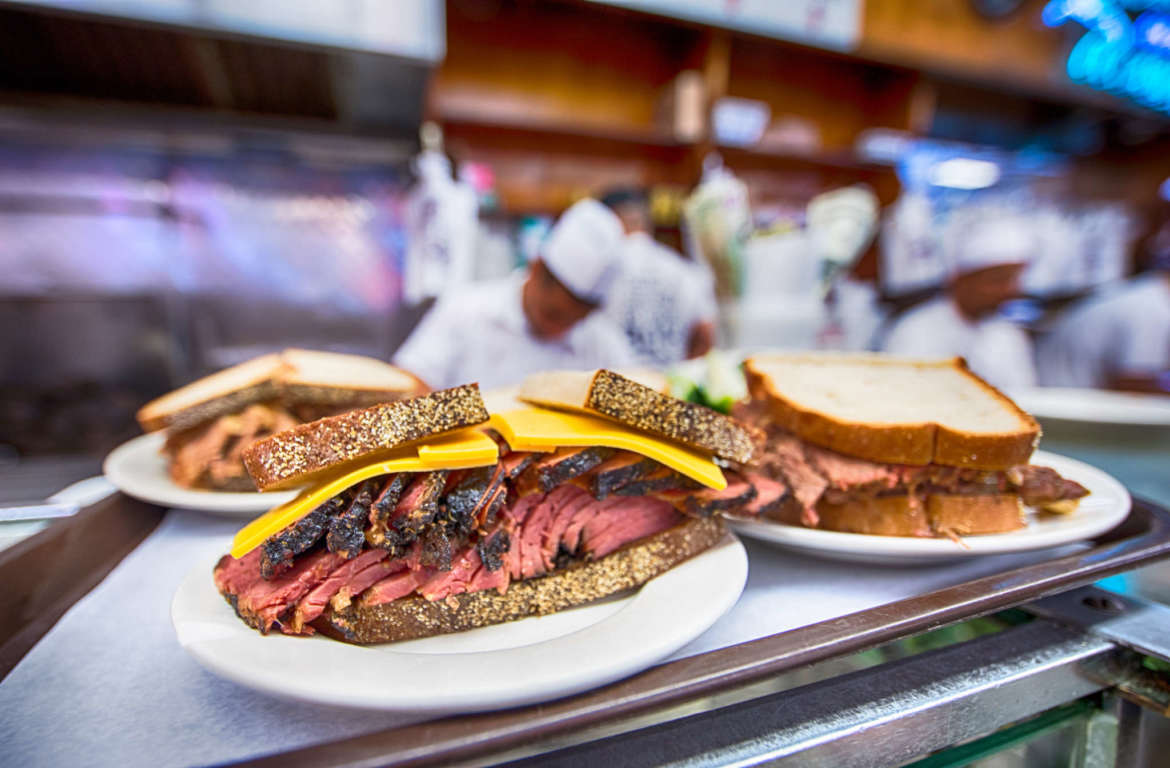 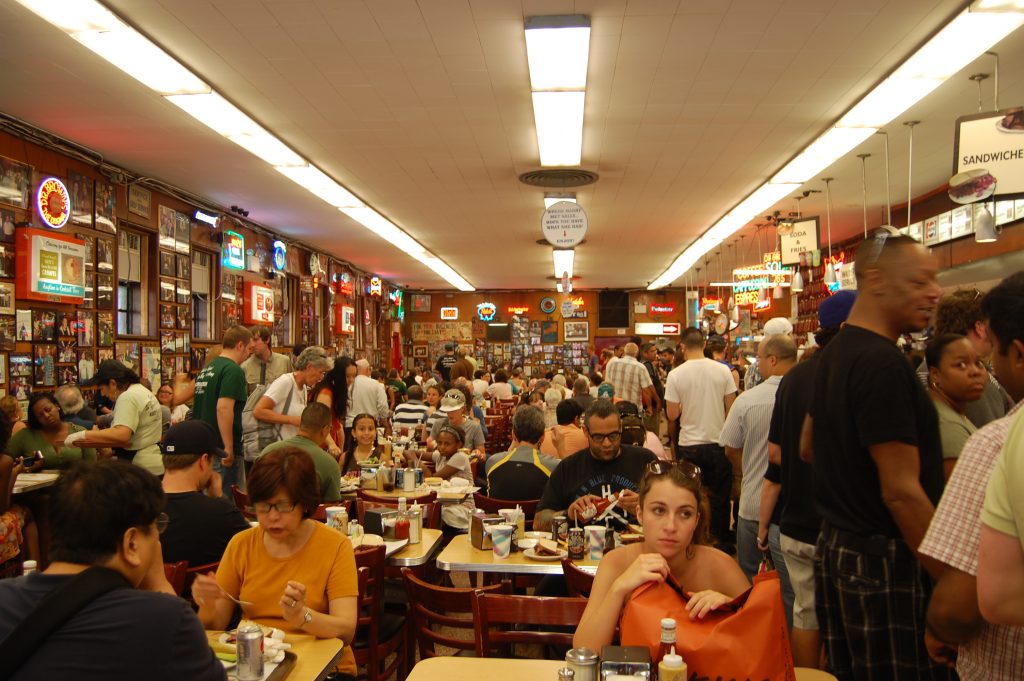 Somehow the name “Iceland’s Deli” never had the same cache as “Katz’s.” But 130 years ago, the New York landmark was born with that name.

If the Iceland brothers knew that what they opened in 1888 on Ludlow Street would outlive generations, they probably would never have invited Willy Katz into the business in 1903. Only a few years later Willy’s cousin, Benny, moved to the United States and moved into the deli with Willy. Soon thereafter, the Iceland brothers moved out and the establishment officially became known as Katz’s Deli.

Over the years, most of the iconic “Jewish” delis made famous in New York have gone to that great nostalgic plot that rests in memory only.

First the Stage Deli, a hangout for Broadway personalities, closed its doors under odd circumstances. That was followed more recently by the famed Carnegie Deli whose walls were covered with photos of famous people who populated its tables. The Second Avenue Deli was forced from its long-time location to a new spot but somehow did not bring the panache or historic taste along with it.

There are other delis in New York, Ben Ash comes to mind, and while it’s an excellent eatery, it doesn’t have the name recognition of Katz’s.

Katz’s has continued to flourish. It recently opened its first “satellite” location in Brooklyn at 445 Albee Square in Market Hall. Jack Dell, the third generation owner of Katz’s said the move was made to accommodate long-time patrons who found it inconvenient to come into Manhattan, especially those from the outer boroughs and Long Island.

The construction of a subway line forced a move from Ludlow Street to Houston (say it like a New Yawker – How-ston) Street where it has remained to this day.

Broadway actors made their way to the Stage and Carnegie while the Yiddish theater crowd headed for Katz’s. It later became a “must stop” for politicians running for office or just looking to make points with New York’s large Jewish community.

Picture Nelson Rockefeller standing on Houston Street in front of the entrance, a bevy of news photographers pointing their cameras at him as he chomped down on a savory hot dog. Rockefeller, more comfortable at an uptown, upscale restaurant such as the Jockey Club, knew the benefit of being seen eating a hot dog in front of Katz’s.

He wasn’t the first and he won’t be the last. The deli is still a prime campaign stop for politico wannabes. 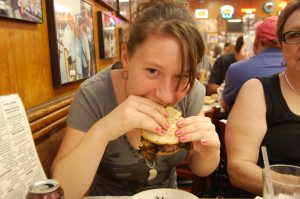 A few years ago, the Food Channel ran a contest to see who had the best pastrami in New York. It ultimately came down to three restaurants: Carnegie, Second Avenue Deli (in its original location) and, of course, Katz’s.

When the smoke cleared, there was only one standing… Katz’s. Very little in this world can compare to the thick, juicy, fatty, hand-carved slices of pastrami at Katz’s. They’ll tell you that pastrami must have a good fatty content to be as tender, juicy and tasty as the hearty sandwiches coming over Katz’s counter.

Tradition here is that no matter what you order, the counterman will give you a slice or a schmear (make that a “taste”) of the meat. Patrons ordering for a table have been known to order sandwiches one at a time so as to score extra slices of pastrami, or even corned beef.

And the size of the sandwich… tourists from Dubuque would make a family meal from one. New Yorkers scarf them down without any outside help. Two Texans visiting from Amarillo, were at Katz’s for dinner with a pair of natives. They all ordered pastrami sandwiches and a humongous plate of French fries. The locals each managed a half of a sandwich and a few fries. The Texans woofed down the entire sandwich and most of the fries. The smiles on their faces could not be wiped away. They had been offered a choice of restaurants and when Katz’s was mentioned, they jumped, having heard about it all the way to the Lone Star State. 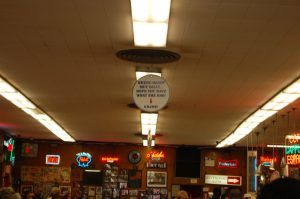 Standing in the middle of the restaurant is a disc over one of the tables. It reads: “Where Harry Met Sally. Hope You’re Having What She Had.”

In the movie: “When Harry Met Sally” with Billy Crystal and Meg Ryan, the table under that sign was the famed faux orgasm scene with Ryan writhing and squirming in her chair. A woman at the next table tells the waiter: “I’ll have what she had.”

But that was not the only movie to find a home there. Johnny Depp’s character in “Donnie Brasco” had a meeting with an FBI agent and Patrick Dempsey was there for the filming of “Enchanted.” It was also in “We Own The Night,”  “Across The Universe,” and a number of other films seeking a location that would immediately identify it as being in New York.

Television shows such as the never-ending series, “Law and Order,” filmed in front of the deli. 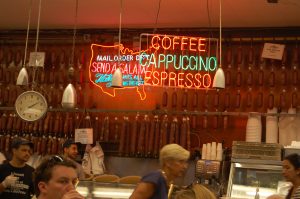 One of the most memorable catch-lines ever concocted came about during World War II, when Katz’s encouraged parents to “Send a salami to your boy in the army.” The sign still hangs in the deli, along with the possibility that soldiers across the world are still receiving Katz’s salamis. The phrase became so popular that anti-war singer Tom Lehrer warbled “Remember mommy, I’m off to get a commie, so send me a salami…”

Katz’s takes its support of American military very seriously, and to this day, has arrangements for special international shipping to U.S. Military addresses and has been the source of gift packages to Iraq and Afghanistan. 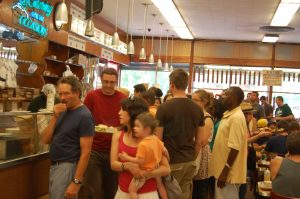 The deli has had a unique method of payment for its long list of foods. As each customer enters the deli, he/she is handed a ticket. Everyone gets a ticket, including children. As a purchase is made, the counterman punches in the price. It’s tallied up at the exit and paid for in cash. No credit cards accepted at the exit.

Here’s a secret: If you go to the far end of the counter, they will accept a credit card. The receipt is then handed to the cashier at the exit door.

Lose a ticket and you’ll be some $50 poorer.

If there is a downside to Katz’s, it’s the parking in the area. Parking ranges from difficult to non-existent. But true fans and devotees will circle the block until something opens up, take a taxi or a subway. Some even walk from uptown, a healthy hike, just to sample the atmosphere and bite into one of those famous pastrami sandwiches.

But for those in the know, discounted parking is available at 169 Ludlow Street, near the original location, about a block from the deli. The tab is $25 for five hours, inexpensive by Manhattan norm. Call (212) 247-7303 for a reservation and discount.