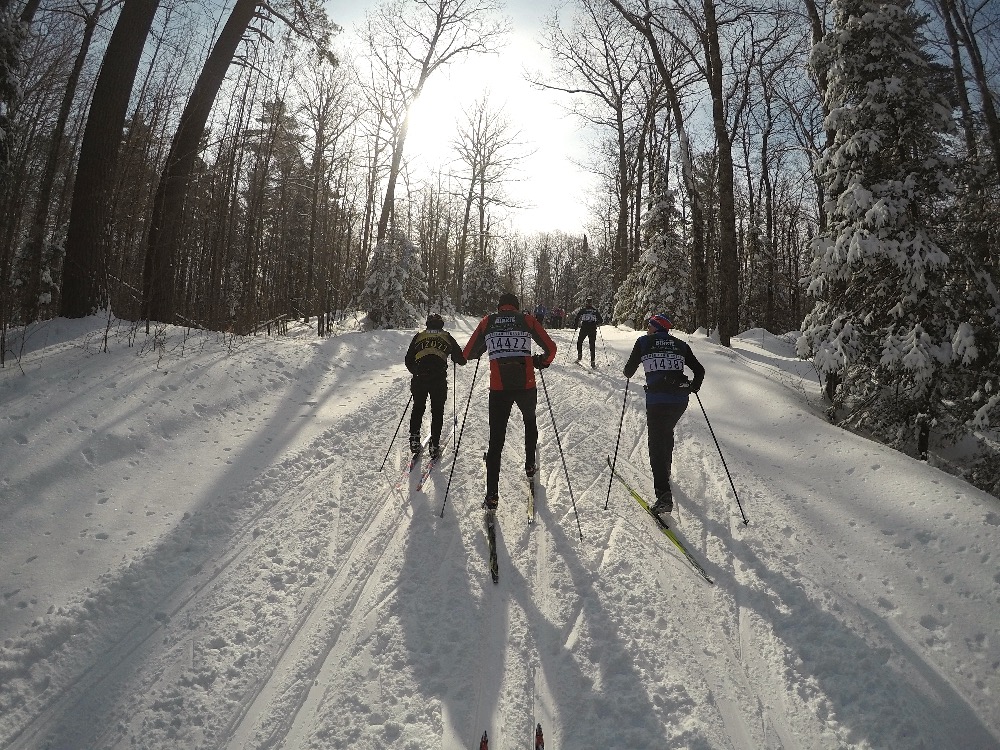 While nine days of snow melted away in Chicago, nearly perfect ski conditions awaited Nordic ski adventurers from 49 states (where were you, Oklahoma) and over 30 countries in Hayward, Wisconsin. They came for the American Birkebeiner Cross-Country Ski Marathon, affectionately called “the Birkie.” It is the most prestigious Nordic ski race in the United States. The race takes place every year at the end of February. Hayward is only six hours north of Chicago between Eau Claire and Duluth, Minnesota.

Where did the name American Birkebeiner come from

The name American Birkebeiner is derived from Nordic lore. In 1206 during the Norwegian Civil War, a group of rebels named the Birkebeiners escorted the heir to the throne, two-year-old Haakon Haakonsson, from Lillehammer to safety in Trondheim.

The American Birkebeiner celebrates this historical event with several cross-country ski races. The event welcomes over 10,000 skiers each year. The main two races are the 55 kilometer classic race and the 50 kilometer skate race. They start in the nearby town of Cable, Wisconsin and end on Main Street in Hayward. The Birkie also caters to less hardcore skiers with several shorter races. The Korteloppet and the Prince Haakon run 29 and 15 kilometers, respectively.

Endurance races have become increasingly popular in Chicago. The Chicago Marathon reverted to a lottery system after their system crashed a few years ago when the race sold out almost immediately. While not as popular as the Chicago Marathon, the American Birkebeiner sells out every year. Each year, registration for the race caps at an earlier point. If the thought of competing in this race appeals to you, it’s necessary to act quickly. Another benefit of early registration is reduced cost for entry.

Last year, the race didn’t take place as five days of over 50 degree weather and several rainstorms washed out the snow. This was only the second time in the race’s 44-year history that the event didn’t take place; however, the weather rebounded this year, and conditions were ideal for this year’s race.

The author competed in his fifth 55 kilometer classic race this year. Skiing through snow covered pines with thousands of other participants and ending up with cheering throngs on Main Street is a bucket list item. Once the Birkie bug is caught, the thrill of the adventure will have you hooked. That is why they call it “Birkie Fever.”

Just like the Chicago Marathon, the difference between the elite skiers and regular participants is vast. In the 55 kilometer Classic Race, 1st place went to Benjamin Saxton with a time of two hours and forty-seven minutes. Three hours and fifteen minutes later, I crossed the finish line at six hours and two minutes. Some participants take seven hours or longer to pass the finish line. For most, the experience of the race and the incredible atmosphere is what makes this race so special.

Comparing a ski marathon to a running marathon

Having completed both a running marathon and a cross-country ski marathon, I can compare the two. I feel a running marathon is a little more difficult as there is no rest and the pounding is a little more intense on your body. Cross-country skiing is a more full body workout, so your whole body feels the race; however, skiing downhill allows periods of rest where you are gaining distance without any expenditure of energy.

The first Chicagoans to cross the line were as follows:

Congratulations to all who participated, and thank you, Hayward, for once again putting on a world class event. For more information on the American Birkebeiner, check out their website.