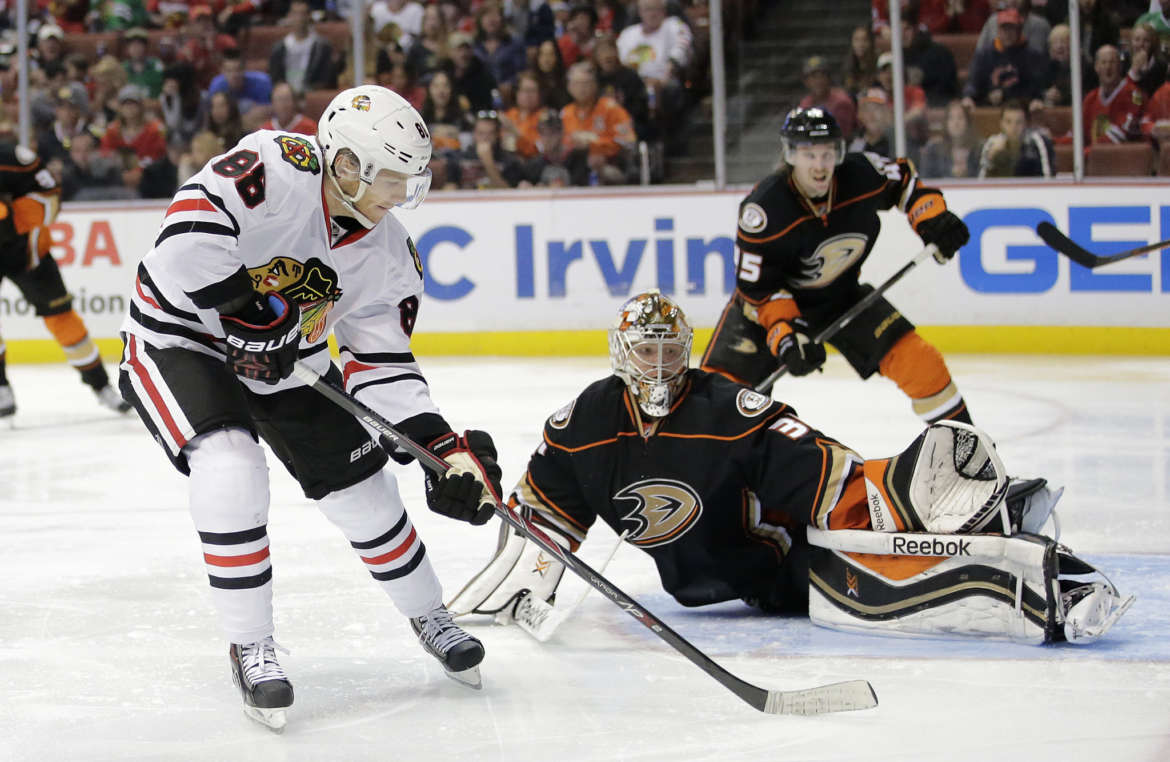 Midway through the last round, it was obvious these two teams were on a collision course. Nobody would complain if this was the Stanley Cup Final matchup, and (with all due respect to the Rangers and Capitals) the could very well end up being the best series we’ll see this year. This will be a battle of two absolute juggernauts, and both teams have been on a roll of late. Here’s your Hawks vs. Ducks series breakdown:

Speed Vs. Size
Chicago’s average player size is 6-foot, 197 pounds. Anaheim’s average size is 6-foot-1, 208. Though this doesn’t seem like a huge difference, consider this: Chicago has eight players who weigh 200+ pounds. The Ducks have 17. While the Hawks will be quick to point to their two Stanley Cups, this is nothing to sneeze at. When facing Chicago, the common approach has been to get physical, though very few teams have actually had success employing this method. The Hawks’ Michal Rozsival (who will miss the rest of the playoffs) may not be the greatest of defensemen, but he was serviceable. On a team lacking in size, he will be missed for his physical presence and large frame.

Star Power
Getzlaf, Toews, Perry, Kane – this one is filled with star players.

Of course, the Hawks always dominate the Star Power category. I could list off all of their names, but I’m sure you know them by now. Marian Hossa has been playing some of his best hockey of late, and Patrick Sharp has finally started to come around for the Hawks. Duncan Keith has two game winning goals in the playoffs and is +10, the highest mark of any player in the postseason. Of course, Perry is dominating pointswise with 15, and Getzlaf has 10 assists. I’m not going to get too into the analytics here though. We’ll save that for our next category…

The Numbers Game
You want numbers? We’ll give you numbers.

60 – Duncan Keith’s SAT (an advanced statistic that factors in both shots and blocked shots for and against), the highest in the series
49 – Hamphus Lindholm’s SAT, the highest on the Ducks

Experience
The Ducks have a few leftover players from their Stanley Cup win in 2007, with Getzlaf and Perry among them. That’s about it though. There were quite a few ducks players still struggling to grow any semblance of facial hair in 2007, and since then they haven’t exactly excelled in the postseason, leading many to call them a “regular season” team.

On the flip side, this will be Chicago’s third straight trip to the Conference Finals, and their recent Stanley Cup reign has been well documented. All of the Blackhawks core skaters have played in over 100 playoff games, and considering how they’ve reacted when faced with adversity in recent years, they know how to use this to their advantage. If Chicago can get an early series lead in Anaheim, this one could actually end up being over quickly (though I think this is unlikely).

Our Pick
The Ducks’ top two lines will get their points, and there will be a game where they get to Corey Crawford. But unlike the first round, Crawford will respond with a strong outing and continue his solid play of late. Duncan Keith will add to his Conn Smythe campaign, and Patrick Kane will pass Corey Perry for the lead in playoff points, giving Keith a run for his money at the award. The Ducks are a great team, and their playoff record shows it, but they’ve faced subpar competition thus far. It should be interesting to see if they can keep the pedal to the floor against the Hawks, and if their physicality begins to get to Chicago’s depleted defense, it could turn the tide in their favor. I just don’t see that happening though. Chicago’s experience and depth will end up being too much for Anaheim to handle. Hawks in 6.