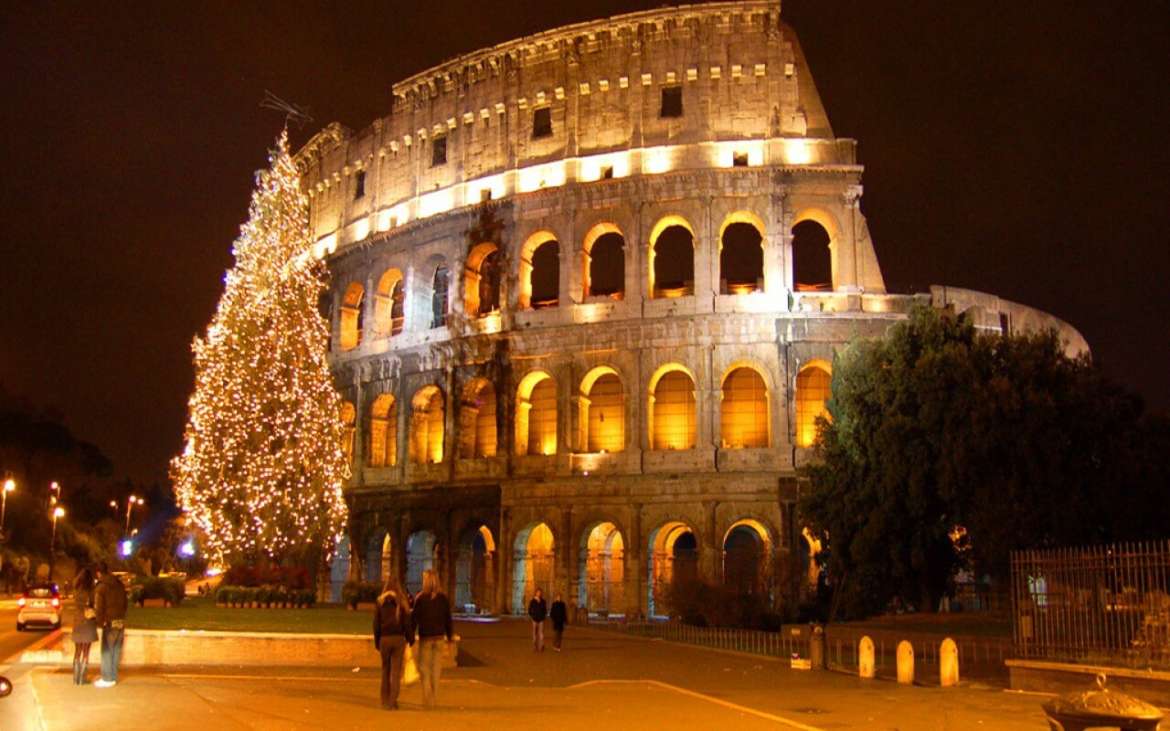 Halfway There: Christmas between Rome and Chicago

Traveling is a style of life. It doesn’t necessarily involve leisure time spent on a beach, or at the heart of the Amazon. Sometimes it can be a mix of two things, of two very different lives that are brought together again – by important events, by weddings, by the need to find catharsis, or simply… by Christmas.

Yes, who doesn’t go back home for Christmas? Especially if going back means crossing an ocean, and landing on a small peninsula which has incredibly warmer weather, and is hosting the Jubilee of 2015?

Compared to Chicago weather, in Rome, Italy, it’s spring. With days that reach seventy degrees, clear blue skies, and practically no wind, it doesn’t even feel like December.

The streets are lit up, the sunset casts fire over the domes of St. Peter and St. John. Radios broadcast some of the Christmas carols, the windowpanes of shops are sprayed with white snowflakes, and the atmosphere is quietly festive. Santa Claus hats can be spotted in the crowd milling around the market of Piazza Navona, among the tables full of treats, handmade souvenirs, and nativity reproductions. It is a quieter experience, with softer edges. While Chicago is waiting for more snow, Rome curls around its chocolate torrone and the Christmas tree in Piazza Venezia.

When traveling through Italy, it is easy to understand that each city celebrates Christmas in its way. In Naples, there is one street that is dedicated to the artisans who make the Nativity reproductions. This is Via San Gregorio Armeno, and during the whole year is it filled with large and small statues of the Nativity. Along Via San Gregorio Armeno there is a church in which, every December, an exhibit of Nativities is installed. This exhibit is free and open to the public for the whole period of the festivities.

This period in Italy usually is marked by the 8th of December (the day of the Immaculate Conception) and ends on the 6th of January, the day of the Epiphany.

The Epiphany finds its roots in a religious event: it is connected to the adoration of the Magi, on the day in which Jesus Christ manifests himself to them.

The Epiphany in Italy is also called, “La Befana” which is a term that can mean “The Witch”. Aside from Catholic roots, it comes from various pagan festivities, and traditions as well.

On the twelfth day after the winter solstice, people used to celebrate the death and resurrection of nature itself, personified by the figure of Mother Nature. Being so tired, by having used all her strength to donate new life and vigor to nature, she used to appear on the night of the 6th of January as an old, good witch. She used to fly on a broomstick during that night, bringing sweets to everyone, and planting the new seeds that would bring forth a young and renewed Nature.

In its pagan, and folkloristic tradition, la Befana is a night of renewal, it is the stepping stone of a year that ends, and another one that begins.

In Italy, nowadays, this tradition has varied from its original version; it is still a turning point of the year, and it symbolized the end of Christmas festivities.

In popular tradition, this day has a special significance for children: the Befana, in fact, is the old lady who, during the night between the 5th and 6th of January, will bring sweets and candies to children who have behaved well, and will bring coal to those who have behaved badly. Children will find this surprise inside a stocking, which is opened at lunch time or in the morning of the 6th of January. The festivity also marks the end of school vacation.

Children will find this surprise inside a stocking, which is opened at lunch time or in the morning of the 6th of January. The festivity also marks the end of school vacation.

There are a number of nursery rhymes based on this myth, the most popular one which sings:”La Befana vien di notte
Con le scarpe tutte rotte
Con il cappello alla romana
Viva viva la Befana!”

“The Witch comes at night
With her shoes all broken
With her roman hat
All cheer the Witch!”