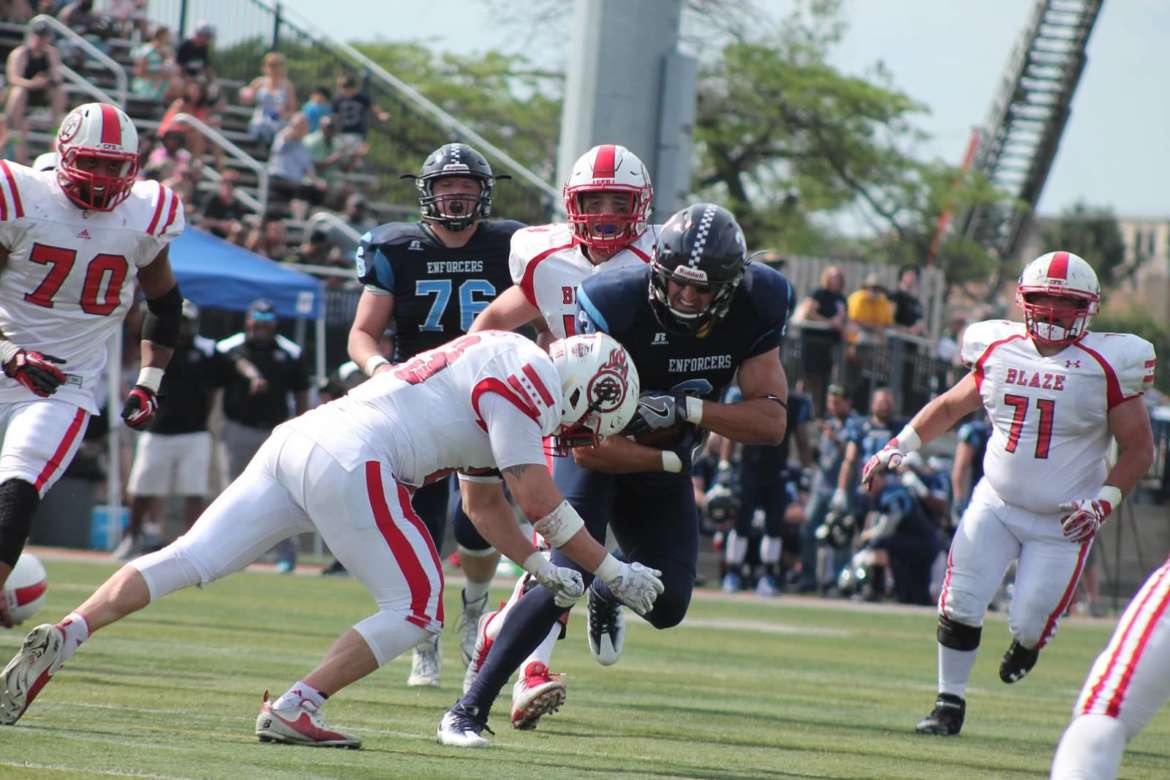 Friendly competition between Chicagoland first responders took place at Brother Rice High School in Chicago on Sunday, June 4. Family, friends, and colleagues filled the stands to support their firefighters, paramedics and police officers as they faced off in football.

The Chicago Police Department Enforcers hosted the Chicago Fire Department Blaze during their last home game of the season at the First Responder Bowl VII.

The afternoon commenced with bagpipes and drums leading the CPD Enforcers to the field. Moments later, the CPD helicopter performed a flyover of the field. Following their procession and flyover, the honorary game captains from both the CPD and CFD were announced at the 50-yard line. The entire crowd then stood to their feet and looked to the flag hanging off a CFD truck as Joselyn White, niece of an Enforcer’s captain, sung the national anthem.

Later in the third, with less than four minutes remaining, the Enforcer’s #26 Steve Holden scored a touchdown. The Blaze defense blocked the extra point attempt, making the score 21-8 Enforcers. Shortly after, with less than 20 seconds left in the period, Brandt scored another touchdown for the Blaze. Brandt’s score, along with #32 Ryan Robinson’s two-point conversion, the score went up to 21-16 Enforcers.

In the fourth quarter, Enforcer’s #44 Rick Richardson intercepted a Blaze throw and passed it to #13 George Hickey. A two-point conversion by Holden made the score 29-16 Enforcers. Later in the quarter, #10 Jesse Estrada scored for the Blaze and #13 John Welsh added another two points to the score making it 29-24 Enforcers. With 16 seconds left in the game, Enforcer’s Garcia intercepted a Blaze throw and scored for the CPD. The touchdown along with another two-point conversion made the game’s final score 37-24 with an Enforcer’s win.

In the end, the competition stayed on the field as both teams lined up for the traditional handshake and the Blaze presented the Enforcers with the First Responder Bowl trophy.

Missed the game? Don’t worry. The game will be featured as Comcast cn100’s Game of the Week and will be broadcast on Comcast channel 100 on Sunday, June 11 at noon and 4pm. Make sure to come back next year and see who takes home the title and trophy.