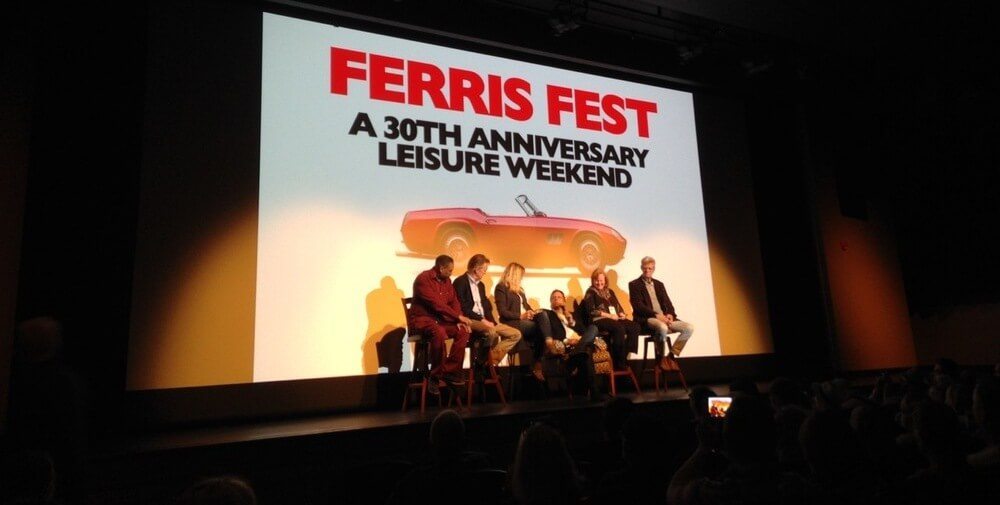 “Life moves pretty fast. If you don’t stop and look around once in a while, you could miss it.“

Those immortal words were spoken 30 years ago by a pop culture icon that still resonates with each new generation as they find themselves coming of age. “Ferris Bueller’s Day Off” is arguably the most popular of John Hughes’ movies. The evidence is in the highly-attended event this past weekend, the first ever Ferris Fest: A 30th Anniversary Leisure Weekend. Held in Chicago and the surrounding suburbs, which John Hughes himself called home, this event was the ultimate experience for any Ferris fan.

The event was organized by an elite team of super fans in the Chicago area, including creator David Blanchard, event director, Cindy Smith, and dance production director, Lee Ann Marie. (Fun Fact: Lee Ann Marie was actually featured as a dancer on the float in the original “Ferris Bueller’s Day Off” film!) Fans were able to buy tickets for all three days of Ferris Fest, as each day promised something amazing. 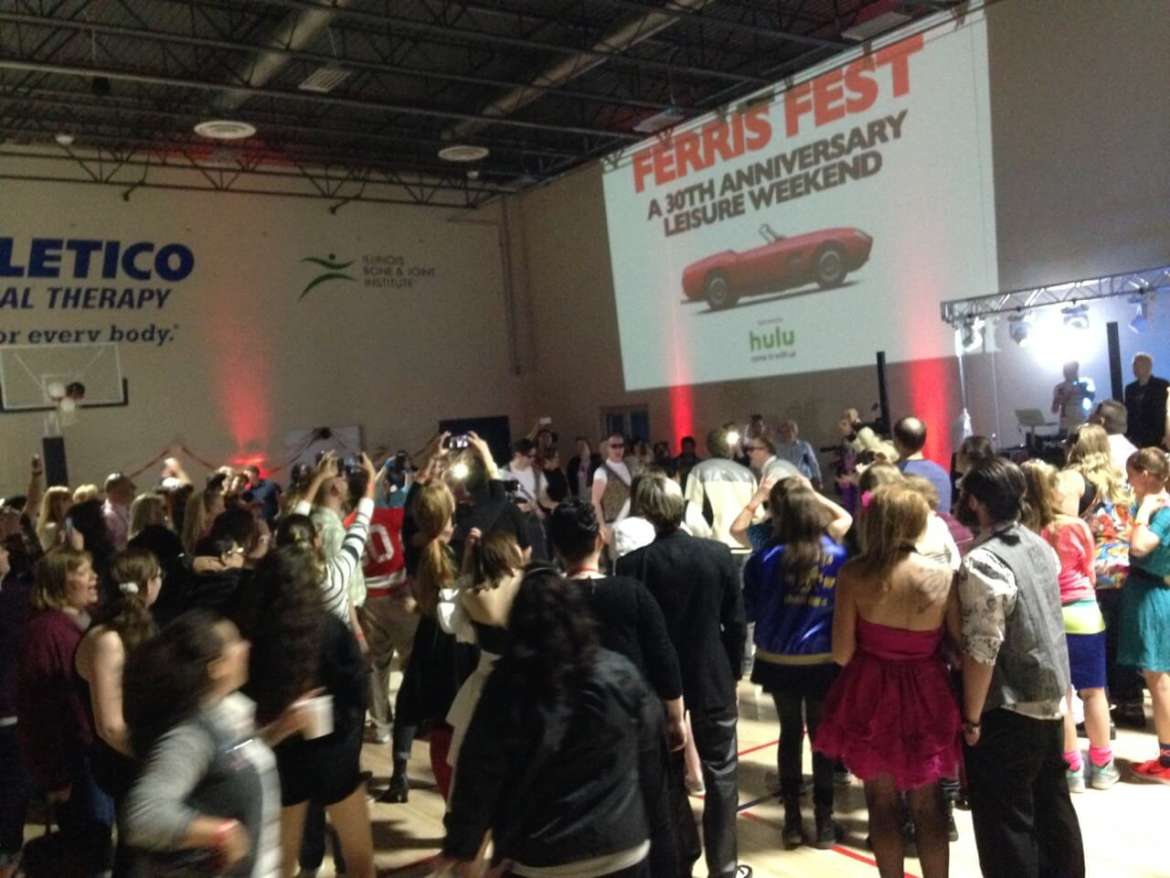 The first day of Ferris Fest started in the evening with an ’80’s dance at the Athletico Center in Northbrook, IL – hometown of John Hughes. KROQ and Sirius radio’s DJ Richard Blade hosted the dance in the gym, also where fans could get their picture taken while sitting in an exact replica of the 1961 Ferrari 250 GT California Spyder (you know, like the one Cameron’s father owned and ended up out the window in the film.) Mingling within the starstruck crowd were “Ferris Bueller’s Day Off” actors Edie McClurg, Cindy Pickett, Lyman Ward, Jonathan Schmock and Larry “Flash” Jenkins – all incredibly talented people who graciously spend their weekend adding star power to the event. People dressed in themed clothing and Ferris Bueller cosplay danced the night away to ’80’s music and a few choice tracks featured in the movie. 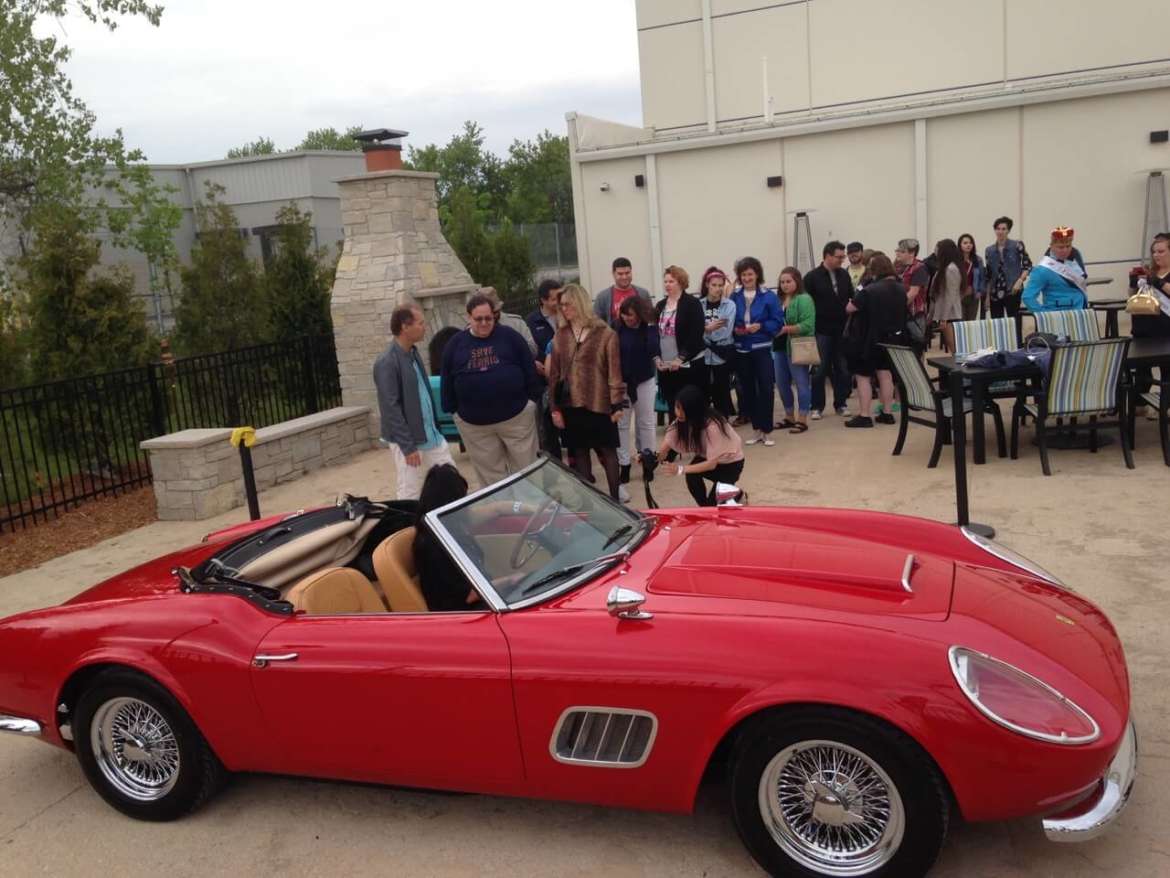 The next day, Ferris Fest fans were taken on a mass bus tour – six buses in total – to visit actual filming locations, including Wrigley Field, the Willis Tower Skydeck, as well as Ferris’ room recreated down to the last detail in an “immersive 360-degree” display at Virgin Hotels on Wabash Ave. After the tour, fans were taken to the John & Nancy Hughes Theater in the Gorton Community Center in Lake Forest for a screening of the “Ferris Bueller’s Day Off” film, followed by a Q&A with the actors, hosted by none other than revered film critic and Chicago native Richard Roeper. Afterward, fans were invited to take a look at some movie memorabilia including Ferris’ iconic leather jacket. 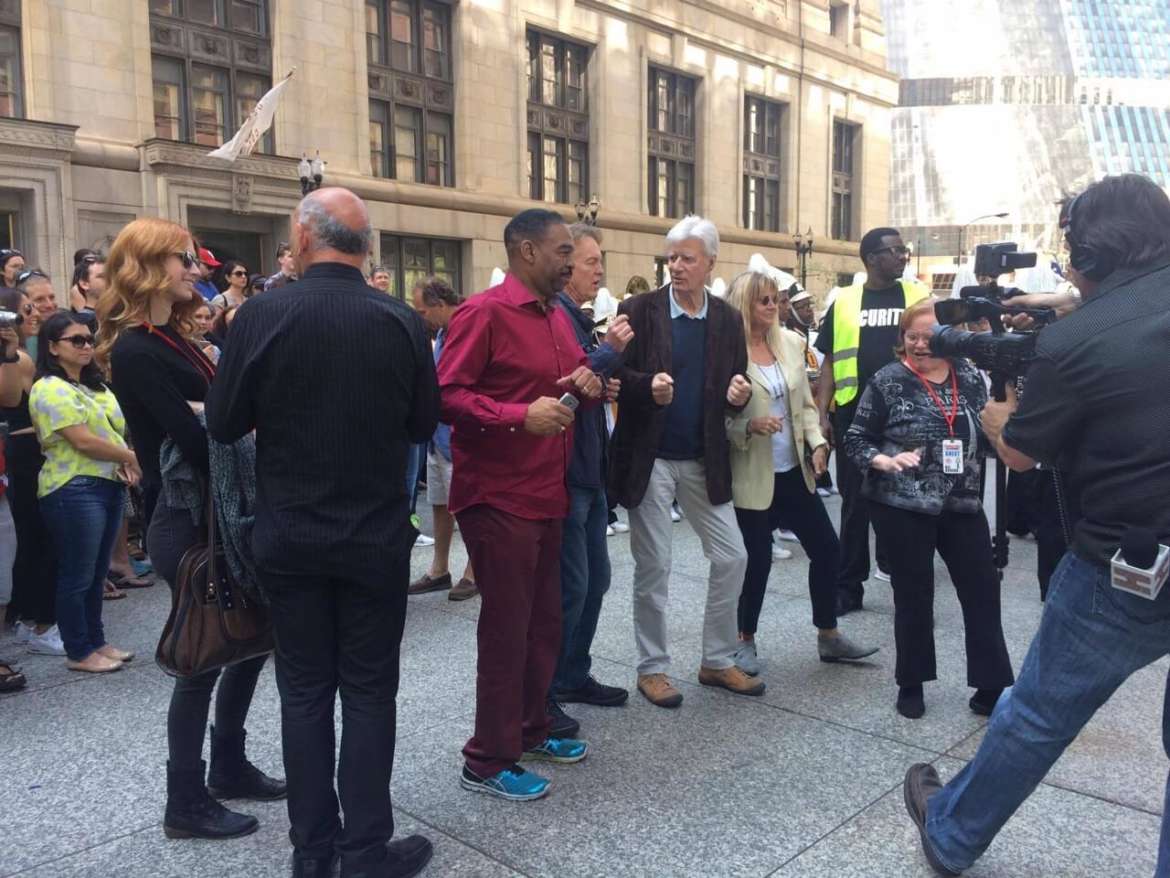 On the final day of Ferris Fest, fans were taken on another bus tour to see the rest of the surrounding movie locations in the area, including a Lake Michigan overlook (where Ferris and Sloane console Cameron), the Art Institute of Chicago, and the Northbrook Water Tower (SAVE FERRIS!) Finally – perhaps the most magical part of the three-day event – the bus tour was taken downtown to a “secret location” (which ended up being Daley Plaza in the center of Chicago’s Loop), where crowds of people stood waiting (some in the know, as part of the event; some passersbys who were completely stumped) for a re-creation of the parade scene from the movie! The scene was incredibly well done, complete with a float, a marching band, actors, dancers, and a Ferris look-alike dancing and lip syncing to “Twist and Shout” along with dancing fräuleins. 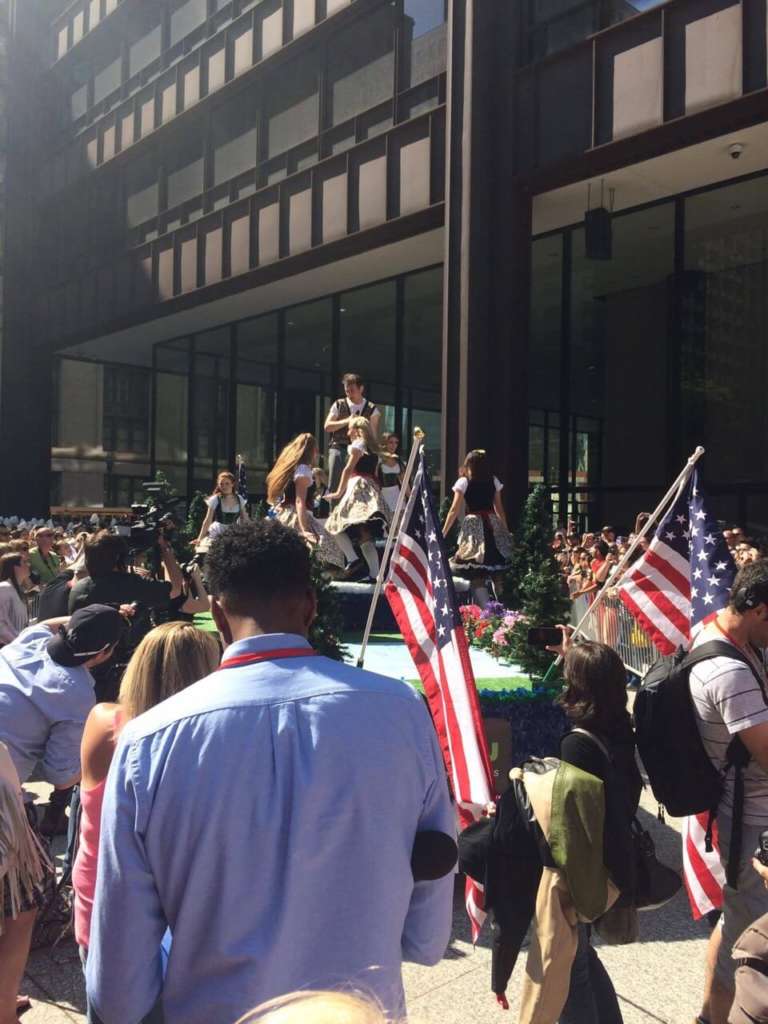 The entire event was so unique and special, made doubly so by the extraordinary people who attended. Some were local and some were from as far away as Philadelphia and Detroit; some were even from Germany, Brazil, and Australia! These Ferris fans were endearingly enthusiastic, especially during the movie screening when they’d recite the lines along with the film verbatim, making it truly the best screening of this film we’ve ever attended! 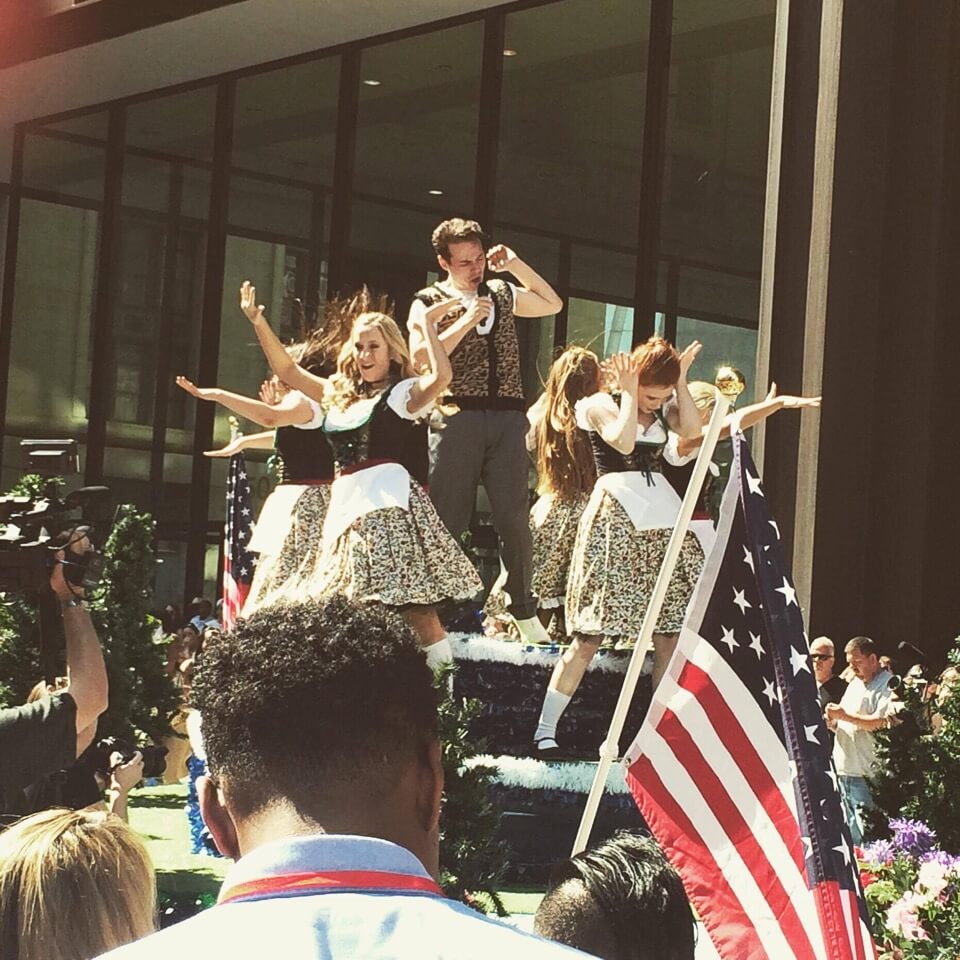 If you missed out, fear not: Event creator David Blanchard made an unofficial announcement that he may be working on a “John Hughes Fest” starting next year to celebrate more of Hughes’ beloved catalog. Be on the lookout for more on that, as support of the project will be the determining factor to whether or not it happens!