The fate of the 2017 school year for Chicago Public School students has been an imminent dilemma on the minds of many across the city. Ever since late February when CPS warned that the current school year might have to end early due to lack of funding, there’s been widespread outrage at how the system’s finances could be so detrimentally mismanaged. 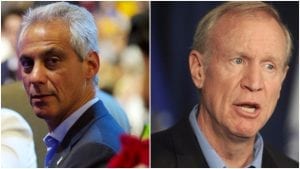 An official from the Mayor’s office announced today that it will, in fact, cost $596 million (not the previously estimated $129 million) to keep Chicago Public Schools open for the proper duration of the school year, due to a delay in receiving block grants from the state of Illinois. An already daunting obstacle has now become even more incredulous. Particularly because the city still isn’t exactly sure how it’ll be funded if the state doesn’t come through, amidst Mayor Emanuel’s vow to keep the schools open no matter what.

In a recent statement, Carole Brown, Mayor Emanuel’s Chief Financial Officer, asserted that all options are still on the table. One of these options includes sourcing from existing city tax increment funds, although it’s a quick fix that doesn’t address the long-term issue of holding the state accountable.

The big picture is that the city is at battle with the state and unfortunately, CPS staff and students are the ones caught in the cross-fire. Rauner turned down a bill that called for $215 million for CPS, sticking to his guns that CPS’ current calamity is not due to the state’s neglect but rather the irresponsible management of funds. CPS fired back with a lawsuit claiming funding discrimination against largely poor and minority students, which proved unsuccessful in court. So who will make the next move? Time will tell in a matter of weeks.