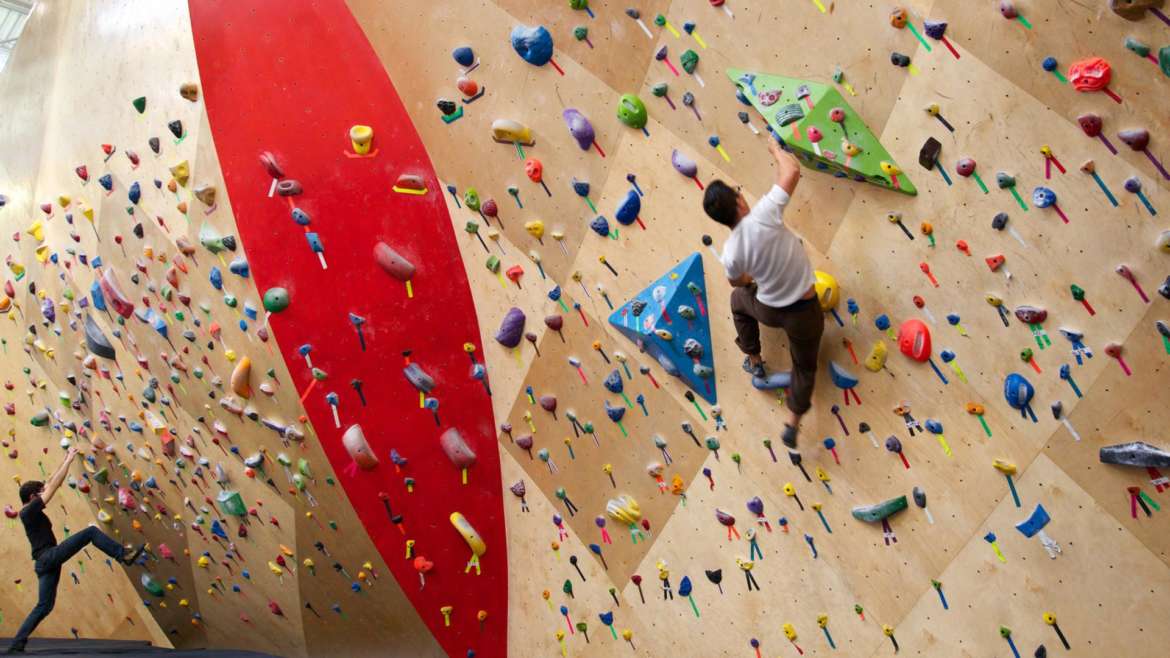 Some Saturday evening you might get tired of the usual party, the club where there are too many people, and the drinks are lousy.

Some Tuesday night maybe you would like to relax, and give your body a stretch.

You’ve always said “no” to the gym because it’s too boring, but what if there was a sport that was enjoyable to the point that you would even spend your Sunday mornings practicing it?

As a person who doesn’t really like sports, I found indoor rock climbing amazing.

My inner child was standing right beside me, looking at walls that were 50′, wanting to get to the top.

So why is this so much fun – especially for your inner child self – and what does Chicago offer?

As a child, I always wanted to climb onto things, much to my mother’s discontent. When in Central Park, I tried to climb on every rock, every boulder, anything that I could put my feet onto.

Doing it as an adult, it’s more challenging, it takes effort, and it’s incredibly rewarding. The first time your body will want to kill you, but after that it’s only easier.

Why a Chicago gym, instead of a Chicago Broadway show, or blues gig, or even your own home and your own couch?

There are multiple indoor climbing gyms scattered throughout the city; most of them offer an assortment of yoga classes, as well as regular gym equipment. One trip to one of them can become a full day of stretching for your body, after a hard week of work, and both the adrenaline and endorphins rush can be rewarded with a nice dinner at any of the restaurants within walking distance. These gyms include First Ascent, with a location in Logan Square, and a new location opening soon in Uptown. Brooklyn Boulders, with their location downtown, Vertical Endeavors near O’Hare, as well as climbing gyms and fitness centers in Lincoln Park, Old Town, and West Town.
I am aware that your couch still sounds more tempting…it might not be as much as you think.

Rock climbing is a sport that has a variety of facets. Indoor rock climbing is done in a gym where you can experience the awe of seeing other people literally hang from walls, and then swing their body as effortlessly and smoothly as Broadway dancers.

There are three ways in which climbing can be approached: there is Top Roping, Lead Climbing, and there is Bouldering.

So how do you climb, and actually get to the top? Flying?

A climber will always be wearing a specific harness, through which rope is attached. On the other end of the rope, there will be a belayer, a person who will act as a counterweight, and safety anchor.

Top Roping is the safest, most common way of climbing used in indoor climbing gyms. It involves the rope going through the Gregory device (an auto-locking device), to an anchor point at the top of the route. The rope is then attached to the climber’s harness, which is ready to climb.

Lead climbing has a different structure: there is a belayer on the ground, and the climber is the one in charge of attaching the rope to various carabiners installed in the wall, as he goes.

Lead climbing takes more practice and is done when one is comfortable enough with Top Roping, to start a route without relying on the rope being anchored at the end of the route.

It’s the goal of most climbers, because it implies also going outdoors to climb. Who doesn’t want to spend a summer weekend stretching against a wall, or visiting South Africa to ascend the “Rolihlahla” route?

Bouldering is freeform climbing, it is done on a wall of 12″, and doesn’t involve any rope. It does, however, require soft pads on the floor, to pillow climbers who, after ascending the route, decide to jump down.
Top Rope and Lead Climbing, on the other hand,  can be done both indoors, and outdoors, and they include various levels of difficulty.

Climbing is a sport that can truly bring together a group of friends, as well as family members.
You will be amazed at the number of children who ascend walls in Lead Climbing, as effortlessly as they were eating ice cream – and you could get to that level of expertise, as well.