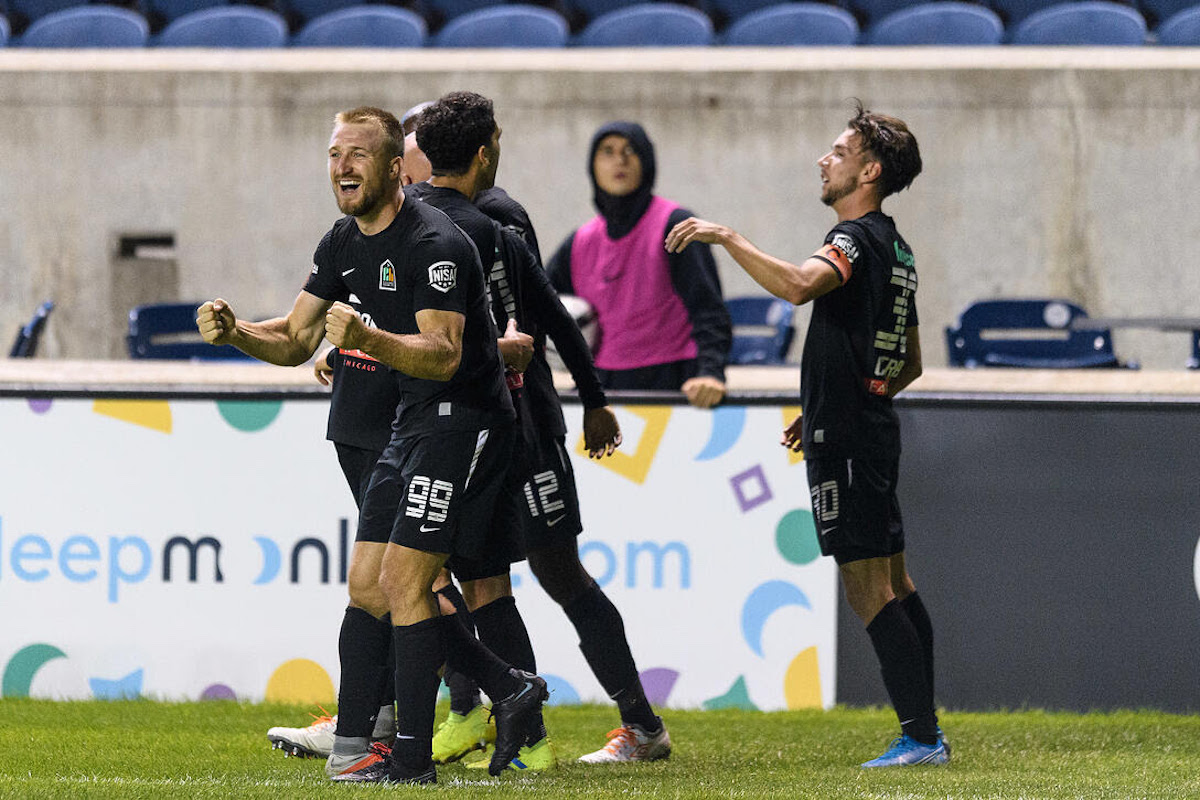 Chicago House AC (4-2-6, 14pts) secured their second straight win at home as they kept a clean sheet against Chattanooga FC (3-2-7, 11pts) and held on for a 1-0 win at SeatGeek Stadium. Ian Cerro scored his second goal for the House in as many home matches. This is the club’s fifth match with a clean sheet this season.

Both teams played the possession game effectively in the first half. Chicago House AC attacked early in the first half to create some chances against the Chattanooga FC defenders. In the 9th minute, Matteo Kidd crossed the ball to Derek Huffman, but his header went across the goal, and Chattanooga FC was able to clear the ball. The drama started in the 21st minute when Daniel Jackson thought he scored a goal off a free kick for Chattanooga FC to give them the early 1-0 lead. However, the referee’s ruled that a foul occurred inside the box, and the goal was waved off. Shortly after that, Daniel Jackson was issued a yellow card. Chattanooga FC and the House had a few changes here and there but couldn’t convert on those opportunities. In the 41st minute, Chattanooga FC had another chance to take the lead with a shot from James Kasak, but his low shot changed directions, and goalkeeper Brandon Barnes was able to secure the ball. In the 45th minute, Derek Huffman made an excellent cross to Ian Cerro, who buried the shot for his goal just before the end of the first half to give the House a 1-0 lead, which was the score at halftime.

It was a more physical battle between these two clubs in the second half, Matteo Kidd gave the House the best chance to double their lead in the 48th minute, but his shot curved wide to the right side of the net. Chattanooga FC created an opportunity to score off a corner kick in the 55th minute with a header from Sean Hoffstatter but was saved by House goalkeeper Brandon Barnes. In the 66th minute, Chattanooga FC’s Damian Rodriguez tried to get an equalizer, but his shot hit the side of the net. Chattanooga FC had one more chance in the 88th minute from forward Markus Naglestad, but his shot went straight to goalkeeper Brandon Barnes. The House managed to redeem themselves after a flat performance last Saturday as they responded with a shutout, and for the first time this season, the House moved out the bottom-three in the 2021 NISA fall table.

After the match, Chicago House AC goalkeeper, Brandon Barnes shared his thoughts on what it was like for him to make his debut for the House.

“It was special and definitely an honor,” said Barnes. “I didn’t find out until the night before. I was happy to get the start and thrilled that we were able to pull a shutout, and that’s big.”

Barnes also discussed his reaction after Chattanooga FC had scored in the first half, but the goal was waved off.

“My heart sank for a bit, and when I looked up, and I saw the refs talking, immediately I knew it was not a goal,” said Barnes. “For me, that lifted me up a little bit higher because I know it was kind of our night. I knew it was going to go our way even though we had that fumble or that scare. I think the guys realized that and ran with it.”

Midfielder Ian Cerro not only just scored a goal but also captained his team to victory and gave insights on what wearing the armband means to him.

“I think it was a big honor,” said Cerro. “It was something I was not expecting, but I always wanted to lead the team by example. That was a little bit extra, but I’m just happy we got the win and go out there and play the way I play, and in the end, I was happy about it.”

Head Coach and Technical Director, C.J. Brown gave perspective on his strategy to setting up his starting XI and seeing how his players responded in getting a crucial three points at home.

“It’s a credit to the players, because those that haven’t had a chance to get on the field and finally got their chance, I felt they stepped up and played well,” said Coach Brown. “They’ve trained hard, worked hard every day, and not getting minutes that’s hard mentally to do. To finally get your chance, sometimes you think this is a make-or-break moment, so there’s a lot of stress and pressure. I thought Andrew Ribeiro and John Requejo, Jr. played very well. We’ve also had guys move around like [Michael] Kafari and [Nazeem] Bartman getting more minutes. I think we’re finding out who we really are, and it’s taking a little time but credit to the guys.”

On Saturday, October 23, the House will have another home match against Maryland Bobcats FC at 7:30 PM CST at SeatGeek Stadium. Fans can purchase tickets by visiting www.chicagohouseac.com/tickets and tune in live by visiting www.chicagohouseac.com/watch-live. For team updates and information, please follow the team’s social media pages on Facebook, Twitter, and Instagram, @ChicagoHouse_AC for live updates and fan reactions. Enjoy the match. #OurCityOurHouse

Next Match: The House will have another quick turnaround at home on Saturday, October 23, against Maryland Bobcats FC at SeatGeek Stadium. The kickoff is scheduled for 7:30 p.m. CT. To get tickets, check out their website and get yours today.