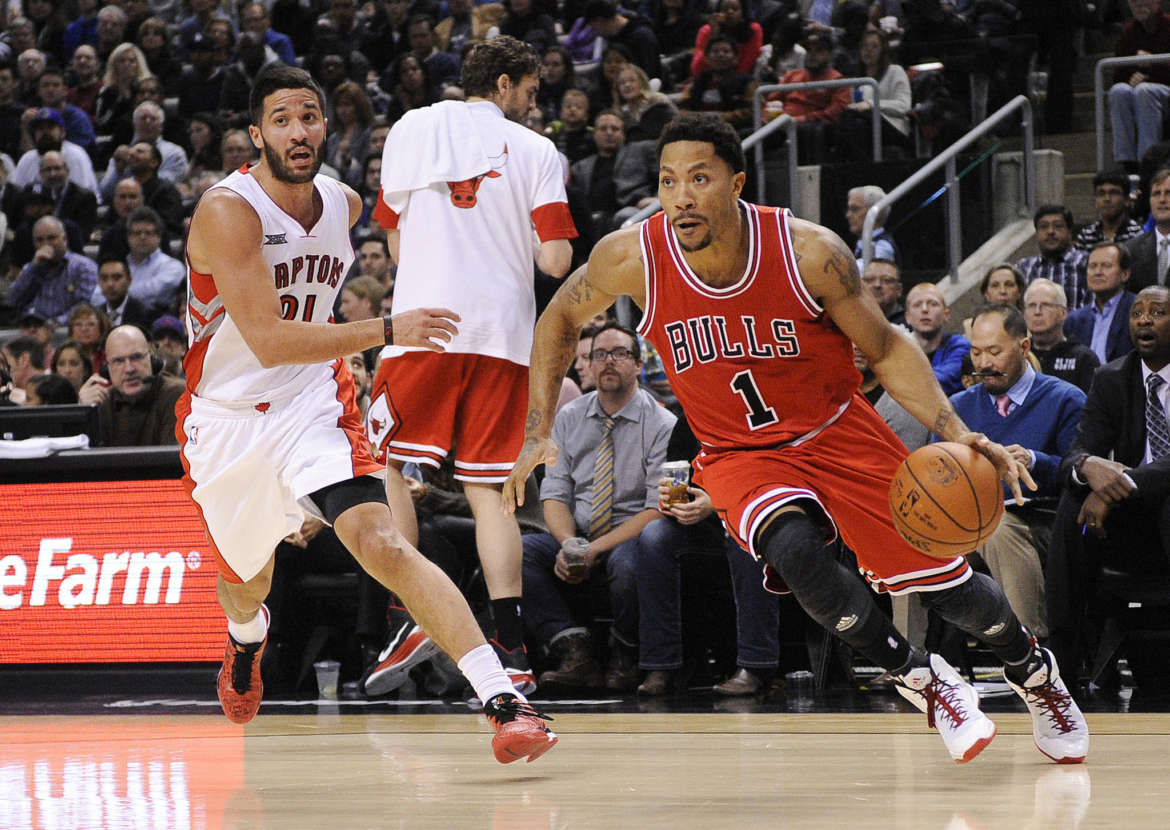 Tonight’s looming clash of the titans in Cleveland should be telling. The (finally) healthy Chicago Bulls are coming off their biggest blowout of the year, and they should have an ever-so-slight edge in the series facing a Cavs team missing both Kevin Love (whole series) and J.R. Smith (two games). Of course, there are some compelling counterarguments. You can never count out a Lebron James led team, and we have to wonder if Derrick Rose will be able to keep up with Kyrie Irving all series long. Either way, it looks like the time is now for the Bulls. They have a better chance of hoisting the Larry O’Brien trophy this year than they’ve had in recent years, and it all starts with finally besting Lebron in the playoffs. My prediction: Bulls in 7. Here’s why:

Backcourt Strength
Now that they’re both finally healthy, Derrick Rose and Jimmy Butler have started to show what makes them such a dangerous combo. Coming into the year, the Bulls were criticized for still only having one perimeter player that could create their own shot. That’s simply not the case anymore, as Jimmy has taken on a much larger role on the offensive end, averaging 24.8 points on 47.6 percent shooting (40.5% from three point land) against the Bucks in the first round. Last time the Bulls faced James in the playoffs with Derrick on the court, he was able to lock down Rose in late game situations, and the Bulls really didn’t have anyone else to turn to. This time around is clearly a different story, and it should make for an intense series with the individual matchups between Rose & Irving and Butler & James.

Frontcourt Depth
Strictly speaking, the Bulls have it, and the Cavs don’t. With Noah, Gasol, Gibson, and (the best beard in the game) Mirotic—Chicago will be able to turn to all four big men at various points. With the lingering injuries to Noah and Gibson it’s incredibly nice to have this luxury, but it will be critical for Tom Thibodeau to find the right matchups for his players. Who will play late in the fourth quarter? The games will probably dictate that, and I’m sure Thibs will stick to the hot hand as he has in the past. I think this is a hugely overlooked strength for the Bulls in this series for two big reasons: They’ll be able to stay fresh, and they have options for matchup exploits and cases of foul trouble. Everyone’s talking about the star players, but this could easily be the difference in the series, especially with Love ruled out.

Motivation & Confidence
If there’s anything that’s certain about this matchup, it’s that Joakim Noah is psyched to compete against Cleveland again. After losing to the Cavs earlier in the season, the outspoken big man didn’t miss a beat, saying, “It would be very, very exciting. Something that I really hope happens.” To go along with that, Jimmy Butler mentioned earlier today that he’s not intimidated by the challenge of taking on Lebron, stating, “He really is a talented player in this league, but I don’t think that intimidates me not to the slightest bit.” Simply put, these guys are ready, but perhaps nobody has looked forward to this moment more than Derrick Rose. It’s no secret that Rose took losing to the Heat in the Eastern Conference Finals four (wow, yeah it’s been four now) years ago extremely hard. Couple that with his recent injuries and the fact that he hasn’t been able to take on a true playoff challenge since then, and there’s pretty much no doubt that Rose isn’t going to give this series every last ounce of energy, commitment, and focus.

X Factor
Jimmy Butler. He’s going to be tasked with perhaps the hardest job in the NBA: guarding Lebron and shouldering some of the offensive load. Players and coaches have echoed the sentiment time and again that you can never hope to stop a player like James, but you can slow him down and make him work for his points. Butler is easily one of the best perimeter defenders in the NBA, and he has had relative success against Lebron in the past. Will he be able to continue his ironman ways though? Jimmy’s injury allowed him some time off down the stretch, but he averaged 42.2 minutes against the Bucks, a number that doesn’t look to be coming down anytime soon. Fatigue may end up being a factor, but if Butler can muster up a few strong defensive plays in late game situations and make Lebron focus more energy on the defensive end, the Bulls should have a good chance of taking the series.

Question Mark
Derrick Rose. Derrick was huge in the first few games against Milwaukee, but he tapered off as the series went on. Was it fatigue? Did he come back down to Earth? Did Milwaukee’s stout D finally figure out how to stop him? It’s hard to say honestly, but I’d imagine it was a combination of all three. Over the course of the series, Rose averaged 19 points in 36.7 minutes, shooting 41% from the field and 37.5% from three. He also averaged 6.5 assists and 4.3 turnovers, a ratio that is going to need some work if the Bulls are to advance to the next round. His three point shooting has been solid, though Bulls fans usually cringe when he starts chucking them up there. Overall, he’s going to need to play a balanced game, taking what the defense gives him and getting his teammates involved. If Derrick can cut down on the turnovers and play efficiently, the Bulls should be in a good position, but if he tries to do too much and gets careless with the ball, they’ll be in trouble.

The Last Word
Ultimately, Cleveland’s stars will come to play, and they’ll undoubtedly score their points. But if the Bulls can limit them and take care of the ball, as I believe they will, their team play should save the day. This is going to be a great series, undeniably one that Bulls fans have been waiting for all year. Ultimately, I think it lives up to the hype, and I think Jimmy Butler continues his coming out party to the tune of 25 PPG and stout defense. Derrick will make a few mistakes along the way, but his love of competition against elite point guards will drive him to take it to Irving all series long. Bulls in 7.